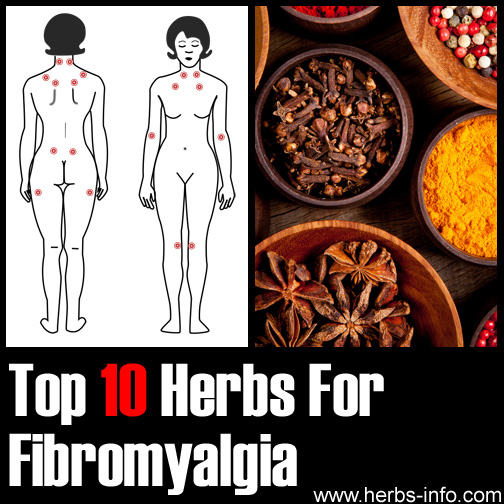 The challenge with fibromyalgia is that it is not only characterized by chronic widespread musculoskeletal pain but is also a syndrome that is accompanied by fatigue, sleeplessness, joint stiffness and even psychological conditions like depression and anxiety. [1]
While the exact origin of this central nervous system disorder remains unknown, many clinical treatments involve therapeutic and pharmacologic interventions. However, these often have shortcomings. Therapies are usually ineffective with some clinical studies showing only short-term effectiveness or patients may have trouble complying with exercise based treatments. Pharmacological treatments on the other hand may pose considerable side effects. [2] Which is why a 2011 survey reports that approximately 90% of arthritic patients employ alternative therapies like herbal medicines for common rheumatic conditions including fibromyalgia. [3] Below are 10 herbal remedies thought beneficial for fibromyalgia.

Chamomile
With sleep difficulties and increasing anxiety frequently associated with fibromyalgia, the calming herb chamomile has been found to promote better sleep, reduce anxiety and even boost the immune system. [4] Scientists believe the dried flowers of chamomile contain terpenoids and flavonoids which contribute to its curative and preventive medicinal properties. [5] And because it is very mild, it is safe even for children and has a wide variety of applications aside from muscle spasm, rheumatic pain and fibromyalgia. [4]

Valerian
Like chamomile, valerian is also an herbal relaxant. When researchers in Germany studied whether bathing in water containing valerian oil have an effect on pain, sleeplessness and tender point count, out-patients with generalized fibromyalgia reported significant improvements in their well-being and sleep while tender point count also decreased significantly. [6]
St. John's Wort
While no specific study has claimed St. John's Wort success in treating fibromyalgia, several researches have shown St. John's Wort as more effective than placebo in treating depression that commonly accompanies fibromyalgia. [7] Other sources show that this herb can be as effective as antidepressants like Prozac in alleviating mild depression [4] - however claims of no side effects should be met with caution as St. John's wort does have the potential for side effects and can can cause adverse reactions if combined with several prescription medications.
Ginko Biloba
In 2002, British scientists conducted an open, uncontrolled study to evaluate the effects of coenzyme 10 combined with Ginko biloba extract in volunteer subjects with clinically diagnosed fibromyalgia syndrome. After participants orally received 200 mg of Ginko extracts everyday for 84 days, improvement in quality of life was gradually observed throughout the duration of the study, with a significant difference noted compared when the study first started. This, together with only minor side effects, proves to be promising for more controlled studies in the future. [8]
Cayenne
Studies suggest cayenne to be a versatile herb targetting pain from anywhere in the head like migraine or tension headaches down to body muscle pain. [4] Clinical trials using various topical preparations of cayenne found evidence of their effectiveness in reducing low back pain compared to a placebo. [9]

Red Clover
Known for its ability to boost the immune system of the body as well as in providing ample amount of energy, red clover is considered as one of the best natural solutions to fibromyalgia. This herb is actually a good source of Vitamins B and C which normally lack in people diagnosed with fibromyalgia. [10]
When made into tea, red clover, together with dandelion and burdock root, aids in cleansing the bloodstream. It also helps in relieving different symptoms of fibromyalgia like poor mental function, intestinal issues, restless sleep, stiffness of the joints and joint pain. [11]
Passionflower
This potent herb has sometimes been included in natural treatments for fibromyalgia because of its ability to relieve common symptoms of fibromyalgia which include tension, nervousness, fatigue, sleep disturbances and anxiety.
Ginseng
Considered as one of the oldest herbs that aid in treating fibromyalgia, ginseng is a very potent herb that is known for its anti-bacterial and anti-viral properties that help people suffering from this condition. It also helps in stimulating the body’s immune system against viral and bacterial infections. [12]
Regular intake of ginseng actually helps in cleansing the body as well as in stimulating the proper functioning of the organs. It gradually eliminates the discomforts caused by fibromyalgia, and through time, all symptoms are relieved. Ginseng also works by restoring the energy lost during the attack of fibromyalgia. [13]
Griffonia Simplicifolia
Though less commonly known, griffonia simplicifolia is a powerful herb that can be used in eliminating the debilitating symptoms of fibromyalgia. The herb actually contains high levels of 5- HTP which is considered as an effective natural pain killer. Griffonia Simplicifolia primarily works by alleviating the pain associated with fibromyalgia. Also, its natural ability to being relaxation and calmness to the muscles help in dealing with the symptoms of fibromyalgia. [14]
Kava kava
Popular for its ability to ward off anxiety and nervousness, kava kava is a very potent herb that can be used to treat several symptoms of fibromyalgia. It actually helps in relieving nervous tension that is associated with conditions characterized by muscle spasms, like fibromyalgia. [15]
The use of kava kava is believed to be effective in reducing mental stress while enhancing mental capacities. It also relaxes striated muscles thereby permitting more blood to flow into the brain. In effect, patients are able to think clearly and properly. [16]
Because no widely accepted cure for fibromyalgia exists, treatment is usually simply focused in relieving the symptoms. [1] Consequently, the growing popularity of using alternative remedies like herbs especially by those who suffer chronic fibromyalgia necessitates further studies on their effectiveness and the mechanisms involved behind them.