A potent coronal hole has become geoeffective and possibly in a combination with an April 18 CME is causing geomagnetic storms reaching G2 levels. This is the second of two geoeffective coronal holes to affect Earth this week. The effects are expected to persist through April 24.
The solar wind parameters during the past 24 hours were indicative of waning influence of positive polarity coronal hole high speed stream (CH HSS), the first to affect Earth this week. After 11:00 UTC on April 21, observatories detected an enhancement in solar wind parameters, possibly from the periphery of a coronal mass ejection (CME) produced on April 18. This CME was not expected to affect Earth, as models showed it had no geoeffective component. However, it seems it was partially Earth-directed and our magnetic field received a glancing blow.
The total magnetic field strength (Bt) was near 5 nT at 11:15 UTC on April 21, when a steady increase to a peak of 14 nT at 16:13 UTC was observed. Bz was variable between +13/-11 nT, with a maximum southward value observed at 15:47 UTC. The solar wind environment decreased from 550 km/s to a low of 453 km/s around 11:15 UTC. Afterward, an abrupt increase in winds speeds occurred to a peak of just under 700 km/s at 20:50 UTC. Phi angle transitioned from the positive sector to the negative sector after 15:45 UTC.
The greater than 2 MeV electron flux briefly reached high levels with a peak flux of 2,810 pfu observed at 15:45 UTC on April 21. The greater than 10 MeV proton flux remained at background values.
The geomagnetic field reached G1 - Minor storm levels at 20:32 UTC, due to the likely passage of a transient feature combined with the onset of a co-rotating interaction region (CIR) preceding CH HSS influence.
Geomagnetic K-index of 6 (G2 - Moderate geomagnetic storm) threshold was reached at 05:59 UTC on April 22. Under G2 conditions, area of impact is primarily poleward of 55 degrees Geomagnetic Latitude. Power grid fluctuations can occur and high-latitude power systems may experience voltage alarms. Satellite orientation irregularities may occur as well as increased drag on low Earth-orbit satellites. HF (high frequency) radio propagation can fade at higher latitudes and aurora may be seen at mid latitudes.

On April 21 and during early UTC hours of April 22, aurora was reportedly seen as far south as Scotland and Denmark in Europe and South Dakota and Colorado in the United States. 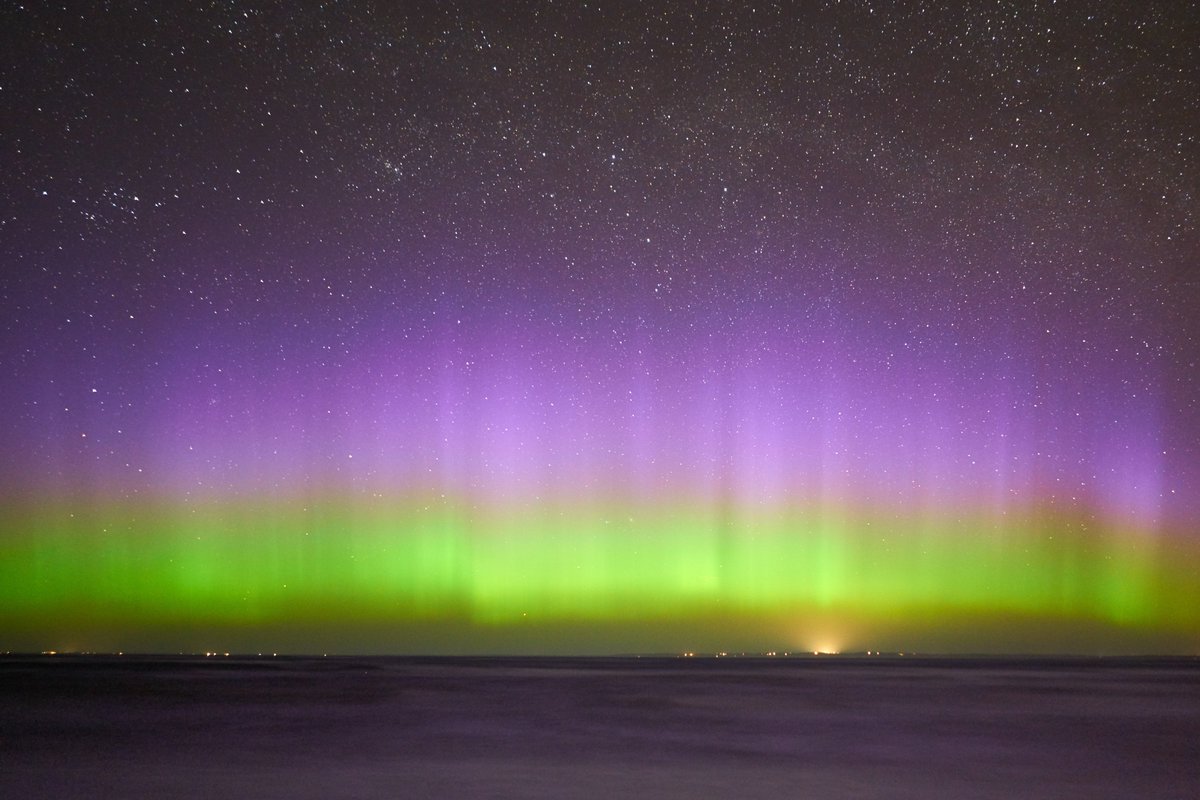 Solar activity on April 21 was very low. There were 3 numbered sunspot regions on the Earth side of the Sun. Region 2651 (beta) continued to decay while Regions 2652 (alpha) and 2653 (alpha) remained mostly inactive.

Enhancements in the solar wind are likely to be observed from April 22 to 24 due to combined effects of the April 18 CME transitioning into the negative polarity CH HSS.
The greater than 2 MeV electron flux is expected to be at normal to moderate levels during the same period due to increased geomagnetic activity associated with CH HSS effects and the likely passage of a transient feature. No solar radiation storms are expected. SWPC forecasters estimate there is only 1% chance for S1 or greater solar radiation storm over the next 3 days.
The geomagnetic field is expected to continue to reach G1 - Minor storm levels on April 22 due to current enhancements in the solar wind. G2 - Moderate storm levels are likely on April 23 from the negative polarity CH HSS. Continued effects are expected on April 24 with active to G1 - Minor storm levels expected through the day as the CH HSS effects persist.
Solar activity is expected to be very low with a chance for C-class flare activity. Forecasters estimate 5% chance for M-class and 1% chance for X-class solar flares over the next three days.
Featured image: Taken by Christian Begeman on April 21, 2017 about 5 km (3 miles) northwest of Hartford, South Dakota at Scotts Slough (via Spaceweather.com)