A metal detectonist stumbled across a small area deep in the woods where he found besides multiple containers; mason jars, salt shakers, boxes, small jars.... all with coins and/or jewelry a mason jar which was sealed tight and looks to be some sort of time capsule. 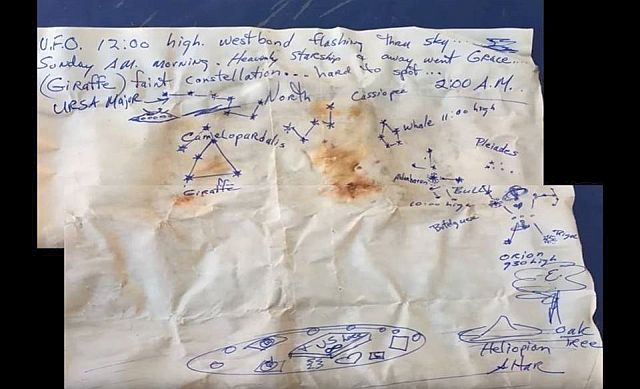 After opening the jar he finds some really strange things but what stands out is some sort of UFO manuscript. It appears to include a description, date, time and very specific location and direction in relation to the celestial constellations.

A commenter did some research and here is what he found out:

Firstly upon initial observation the contents of the mason jar dating back some 30-40 years ago, seemed to follow the Hoodoo tradition of a Wiccan love spell, sometimes called a bottle spell. Hoodoo not to be confused with Voodoo is an ancient method of Earth worship at a simple explanation.

Foremost the jar needs to contain a supporting object of affection (Grace Kelly?) and dates where some associated event took place thus the coins. The value of each coin could also have meaning but not knowing the intent of the spell leaves.

Grace Kelly (November 12, 1929 – September 14, 1982) was an American actress who became Princess of Monaco after marrying Prince Rainier III, in April 1956. She died on September 14, 1982, a day after suffering a stroke while driving her car, which caused a crash. To date, her death has been surrounded by mystery.

Now the UFO portion of the jar is another matter entirely.

Since Grace Kelly passed on was the UFO event inserted into the jar as an attempt to describe a passing? Like in an alien abduction?

So the jar seems to be linking two events - love for an individual that has passed with a possible alien abduction?

Here are what the contents in a jar spell represent:

A personalized item: A photograph, hair, nail clippings, blood or other personal item of the object of your spell.

A prayer: Symbolizing a greater power. Also the prayer may contain a message.

Liquids: Generally the bottle contains some liquid, and which liquid you choose would depend on your intent.

Rocks or crystals: Have to do with building a foundation or power.

Some people suggest to find the person who sealed and buried it to get the full story however it is quite possible they may not like that someone found it though.

First video shows the moment the metal detectonist finds the jar including all other stuff.
Second video shows the live opening for the first time since the jar was sealed.