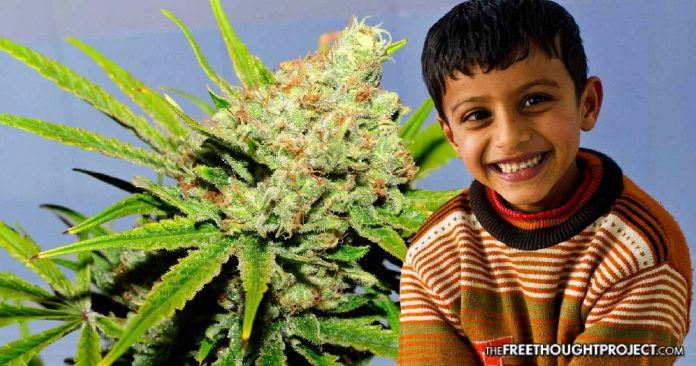 Autism could now be added to the lengthy and perpetually-expanding list of afflictions and symptoms treatable with the one product of nature shamefully prohibited by the federal government — the “miracle” palliative, cannabis.

One in every 68 children in the United States is now affected by autism, and the number of kids coping with the developmental disorder has been increasing at an explosive rate in recent years. With onset most common during infancy and early childhood, autism can impact social and communication skills and may cause repetitive or compulsive behaviors, among other manifestations.
Now, fresh evidence again frowns upon U.S. federal prohibition of cannabis — listed as a Schedule I dangerous substance of no potential medical use, alongside heroin — which could be depriving ailing children the chance for treatment, and hope for a better-adjusted future.

In contrast to its staunch U.S. ally, Israel has approached the cannabis plant as the medicinal healer it has more than proven to be — medical marijuana was first approved in Israel decades ago, in 1992, making it one of the first in the world to do so.
As USA Today notes, in a recent article titled, Marijuana may be a miracle treatment for children with autism, Israel and just two other countries — Canada and the Netherlands — have government-sponsored medical marijuana programs available to citizens.
As USA Today reports:

When Noa Shulman came home from school, her mother, Yael, sat her down to eat, then spoon-fed her mashed sweet potatoes — mixed with cannabis oil.
Noa, who has a severe form of autism, started to bite her own arm. “No sweetie,” Yael gently told her 17-year-old daughter. “Here, have another bite of this.”
Noa is part of the first clinical trial in the world to test the benefits of medicinal marijuana for young people with autism, a potential breakthrough that would offer relief for millions of afflicted children — and their anguished parents.

Because of the notorious, if not nefarious, American war on drugs irresponsibly focuses on the cannabis plant as a dangerous substance sans redeeming medical value, research here lags exponentially behind other nations — unnecessary red tape, regulations, laws, and restrictions make procuring clearance for scientific study a somewhat odious hurdle.
To wit, the Food and Drug Administration — which, incidentally, oversees the drug warriors of the DEA — has thus far only approved two antipsychotic pharmaceuticals for the treatment of symptoms of autism. Both of those come replete with a host of serious and untenable side effects — making the choice to treat a difficult one, at best.
Israeli researchers, unbound by the absurdities of the drug war, began a new study in January at the Shaare Zedek Medical Center in Jerusalem, comprised of 120 children ranging in age from five to 29 years, who have been diagnosed with mild to severe autism.
Study participants are given one of two cannabis oil treatments or a placebo, drops of which can be mixed into a meal — none contain high levels of THC, the ingredient which gives users a ‘high.’
“Adi Aran, the pediatric neurologist leading the study, said nearly all the participants previously took antipsychotics and nearly half responded negatively. Yael desperately pushed Aran and other doctors to prescribe cannabis oil after a news report aired about a mother who illegally obtained it for her autistic son and said it was the only thing that helped him,” USA Today reports.

Thanks to Claire at: http://thefreethoughtproject.com