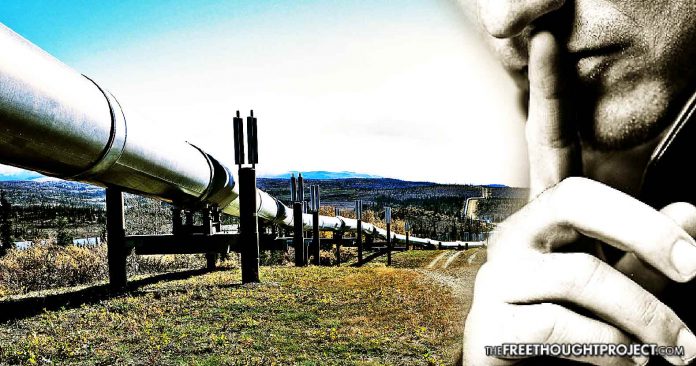 Investigative and watchdog media outlet, MuckRock, again had a Freedom of Information Act request turned down concerning the Dakota Access Pipeline, with the Army Corps of Engineers petulantly claiming the release of the full environmental impact assessment would somehow threaten public safety.
27 Extremely Fearsome Warriors History Have Ever Seen Sponsored by Frank151
According to MuckRock, documentation was “withheld in its entirety under b(7)(f), ‘law enforcement-related information necessary to protect the physical safety of a wide range of individuals.’
“Army Corps of Engineers (ACoE) have rejected a FOIA request for the ‘assessment report on the potential impact of an oil spill of the Dakota Access pipeline,’ arguing that the release of such information would people’s lives at risk.”

For its part, Army Corps attorney Damon Roberts told MuckRock and co-founder Michael Morisy in a denial letter, “The referenced document contains information related to sensitive infrastructure that if misused could endanger people’s lives and property.”
Roberts refused to edit those allegedly ‘dangerous’ details to release the document in full — instead choosing to keep the body of information undisclosed.
“I understand exempting some details,” Morisy told Huffington Post, “but knowing the impact of a natural disaster should be public. I was very disappointed.”
Withholding such information might not give the Corps pause, but considering strident opposition to Dakota Access — water protectors camped on site for months, supporting the Standing Rock Sioux Tribe over concerns drinking water from the Missouri River’s Lake Oahe reservoir could be tainted with crude — it would seem any assessed potential for leaks is of the utmost priority.
A priority the Army Corps and Energy Transfer Partners, the company responsible for pipeline construction, seemed to dismiss outright in foregoing multiple requests from the Tribe to be granted consultation, not only for the integrity of the water supply, but also over potential cultural, tribal, and historical impacts.

But, in the interest of transparency in government, The Free Thought Project discovered portions of the information sought by MuckRock surreptitiously placed online in February — a full 1,261 pages, in fact, bearing the unassuming title,
“Mitigated Finding of No Significant Impact. Environmental Assessment. Dakota Access Pipeline Project. Williams, Morton, and Emmons Counties, North Dakota.”

This document, dated July 2016, indeed appears to be the official environmental assessment around which controversy continues to fly — even after recent completion of the Lake Oahe juncture, the last remaining segment of Dakota Access.
Buried in its pages are details pertaining to expected trouble points along the pipeline’s 1,172-mile route, as well as imagined impacts to sensitive ecosystems where DAPL crosses over or under bodies of water — points exclusively under Army Corps management.
Controversy surrounded Dakota Access Pipeline’s planned route under Lake Oahe, as the Standing Rock Sioux’ drinking water supply is drawn from the same body of water — ETP claimed the pipeline being situated feet beneath the bed of the lake, concerns persisted a breach would allow crude to seep uncontrollably and travel down the Missouri.
And it isn’t as if the public will be privy to future leaks and spills, as U.S. District Judge James E. Boasberg ruled in March that points along the pipeline at risk for spills should not be available to the public — though how a spill or leak would be handled by crews, should be.
According to the judge, referring to the less detailed environmental assessment undertaken prior to DAPL winning approval, ETP “modified the pipeline workspace and route more than a hundred times in response to cultural surveys and Tribes’ concerns regarding historic and cultural resources.”