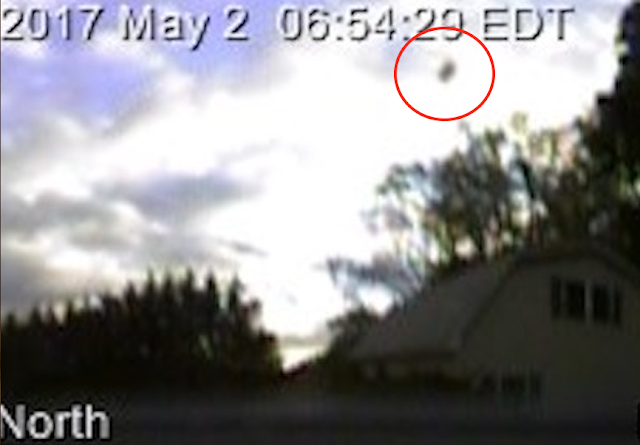 This UFO was seen on a sky cam and it was seen for over 5 minutes. Such sky cams are extremely good tools for observing to see if there is a UFO in the frame. I too go through live sky cams, as I did this morning, looking for UFOs. Its fun, its easy, and sometimes you get lucky. Not to mention, you can be in a 100 different places in just a few minutes.
Scott C. Waring


Eyewitness states:
Viewed object in 2 frames spanning a 5 minute period, so it was not a plane. One frame shows that it was reflecting light. This sky cam has been offline since seeing this object. 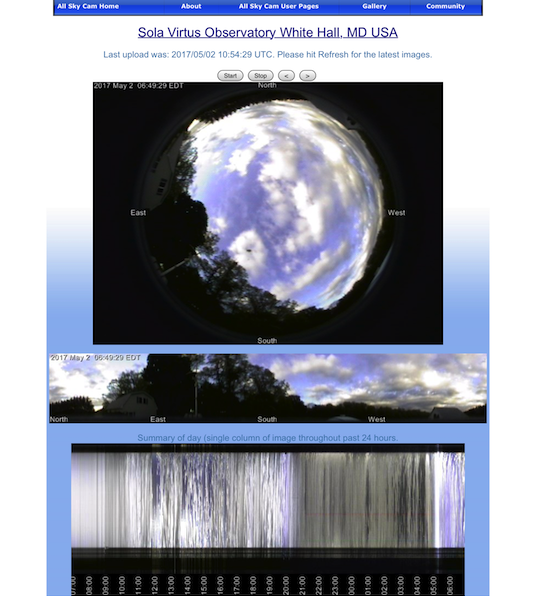 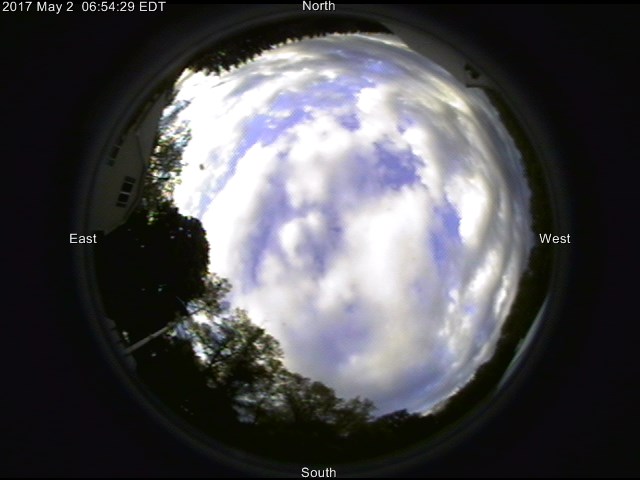 2030 hrs, (EDT)—Two adult witnesses, both of whom are trained research-grade scientists, were sitting outside, admiring the night sky, when one called the attention of her colleague to a formation of rectangular-shaped, somewhat yellow in color, lights, in a phalanx-shaped formation, passing overhead at a rapid rate.

Two of the yellow lights appeared to switch positions with one another, after which the formation stopped and remained motionless in position for a short period of time.

Shortly after the formation had stopped, the whole cluster reportedly just faded from view.

A wedge shaped formation of lights silently passed overhead where lights in the formation switched position before fading from sight.

A colleague and myself were sitting on a dock, off of Water St near the Oceanographic Institute, facing Nonamesset Island, when my colleague directed my attention to the evening sky.

We observed an array of rectangular lights (6-8 lights), producing dim but discernable light with a slightly yellowed tone, arranged in a wedge or flying-V formation.

The formation of lights, no more than 200ft off the ground, silently passed overhead moving Northeast.

Importantly, the lights seemed to deliberately dip and bob without breaking formation, suggesting they are indeed units comprising a larger array.

The formation moved over Water St until it was visible over the Rowe Laboratory. Interestingly, while moving, the lights adjacent to the trailing terminal lights on either end of the “V” gracefully switched positions.

The formation stopped after this and faded out of sight. It is worth mentioning that our line of sight with the formation was never interrupted, and we did not observe it flying away: we observed it until it simply faded from view above the Rowe Laboratory.

We, the two observers, are developmental biologists who traveled to Woods Hole to attend a regional conference.
permanent link: www.ufocasebook.com/2017/multiple-lights-reported-woods-hole-massachusetts.html
source & references:
www.nuforc.org
edited by www.ufocasebook.com 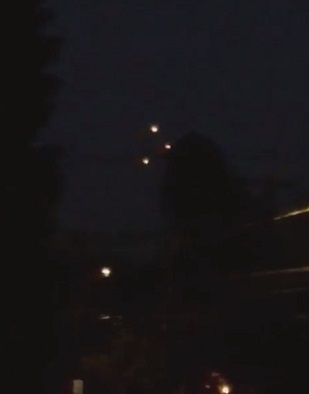 @ 2100, hrs. (PDT)—Two witnesses stand outside for twenty minutes, observing three lights in the night sky. The lights appeared to maneuver for several minutes, first forming a triangular pattern, and then arranged into a horizontal, straight-line formation.

The primary light on one of the objects appeared to dim, revealing prominent flashing red and white lights. All three lights departed and disappeared from sight, after which one of them returned to the same location where it had been in the sky.

One witness captured the photo shown above.

There were three bright balls of light, too bright to be a plane or helicopter and brighter than the street lights. At first they weren't aranged in any particular way but slowly went into a triangle formation, then proceeded to change into a horizontal line.

One of them dimmed and was no longer bright and, instead, had flashing red and white lights, almost exactly like an airplane, but was moving too fast to be one. It flew away.

The other two shortly followed individually. There was nothing for about five to ten minutes, then one came back (the bottom one) to its exact spot where it was before and was bright again then flew away. 
light shot into kitchen from window...

@ 2100,(EDT)—A young woman and a male friend were preparing dinner in her kitchen, when and intensely bright shaft of blue light suddenly flashed through the kitchen for approximately two seconds’ duration.

The light was so bright that it left the two witnesses “light blinded” for several seconds, following the flash.

Brilliant blue beam of light shot into kitchen from window, the flash stretched about ten feet and disappeared in seconds.

Around 9 PM, I was cooking dinner on the stove with my friend. To the left of me was the fridge, and to the right of me is a window on the adjacent wall above the sink.

My friend was in front of the stove, I was about three feet behind him. He was turned slightly toward me, when this occurred, but he is colorblind, so he saw the brightness of the flash but not the brilliance.

It was as if a straight beam of brilliant blue light flashed in from the window in a horizontal line in front of him, 2 feet above the counter, from the window towards the fridge. It was so bright, I was unable to regain vision for a second after it happened. I could swear that I heard a grinding noise in my ears when it flashed, but that may have been from shock.

It was not one consistent color blue, there were shades in it, and it had some orange tinges at parts. It was the most beautiful light I have ever seen, but if I didn't know any better, I would swear that for that few seconds, a seam in the universe ripped.

I have had two other sightings earlier this year that were the same, but different from this one. I am at work, but will try to report them later.

I do not know if what I saw was UFO related. But it is not my first encounter that I have said... and I trust my instinct.

We searched the yard. Checked the stove and all the lightbulbs that were on. It was not electrical. There was nothing in the yard signifying anything else.
permanent link: www.ufocasebook.com/2017/blue-light-bursts-thru-window-in-lawrenceville-new-jersey.html
source & references:
www.nuforc.org edited by www.ufocasebook.com

Published on May 7, 2017
This footage was filmed in France and shows several UFO's interacting with each other.

If you watch the little one up towards the top next to the larger ball shaped UFO, it will hide behind the bigger one, come down closer the largest one that shines those lights, then come back up and hide real quick, and at one point, you will the smallest one come down and touch the light shining one, then immediately go and hide, as if these UFOs, are more than ships, it is as if these anomalous are alive. 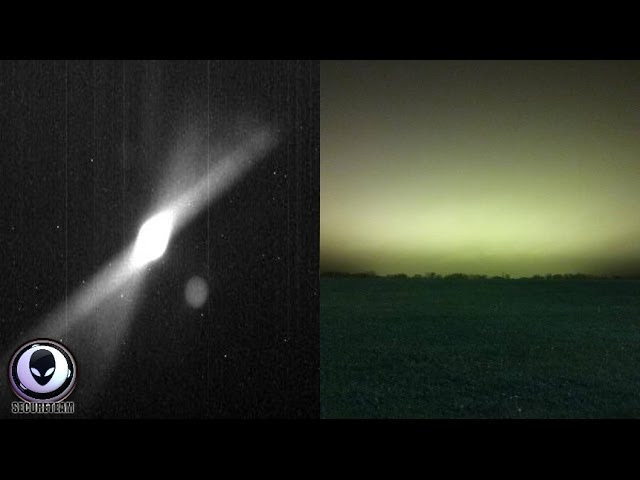 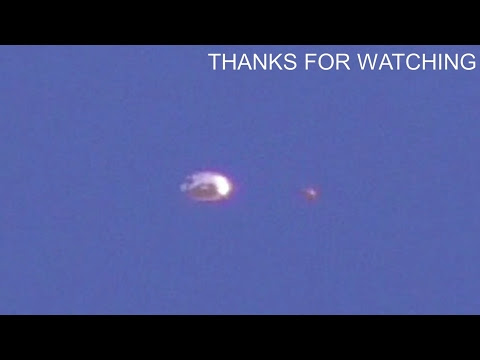