OUT OF MIND » THE INSANITY OF REALITY » GOVERNMENTS & THE NEW WORLD ORDER » TIME CAPSULE: The Man Determined To Prevent World War III 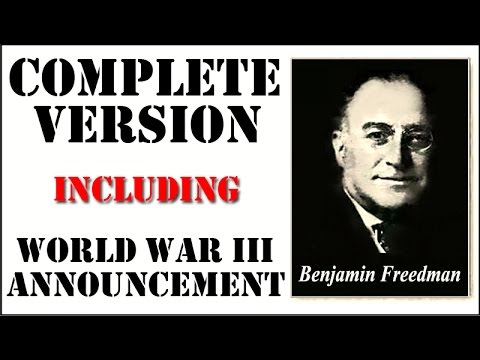 
Truly, if World War III is somehow averted, it is Benjamin H. Freedman
who ought to receive the accolades and adulation for accomplishing such
an awesome feat.

Without qualification or condition, without a doubt or a question, the following video presents –by far — the single most important rendition of revised history on the World Wide Web today.
VIDEO: Freedman’s Historic 1961 Speech Warning Of World War III (Short Version)
Given the current state of international affairs, The Millennium Report would go one step further and assert that the preceding speech represents the greatest exposé in modern history—bar none.

What, then, distinguishes Mr. Freedman as the greatest whistleblower OF ALL TIME?  And what exactly makes this the most important video on the Internet today?
Simply put, were Freedman’s historical retrospective on World Wars I and II listened to by a critical mass of people, the entire planetary civilization would literally change overnight.
Why?
Because of his extremely compelling and factual firsthand account of the true causes of both World Wars.  More significantly, Freedman discloses the carefully laid plans for a Third World War.  That truth, incidentally, is so radioactive it has the power to immediately terminate the unfolding agenda to trigger the hot phase of World War III.


The Truth Shall Set Ye Free

It’s crucial to note that Benjamin Freedman was, at one time, an insider who was always a peacemaker, never a warmonger.  Because of his enlightened perspective and privileged positions vis-à-vis the U.S. Federal Government during the first half of the 20th century, he was privy to the plots and schemes of the rich and powerful.  As a result, he was able to deliver the highly authoritative and indisputable back stories of both World Wars with great conviction.
The following link provides the full and unedited version of Freedman’s epic talk at the Willard Hotel in Washington, D.C. in 1961.  It contains the many references to World War III which have been removed from many shorter versions on the Internet.

VIDEO: Freedman’s Historic 1961 Speech Warning Of World War III (Long Version)
What makes these revelations so extraordinary is that they have been bravely uttered by a Jewish American businessman who was in the know… … … about practically everything of global import.  Bear this in mind as you listen to the hard (but politically incorrect) truths about world history over the past 100 plus years.
It cannot be a coincidence that this recording of Freedman’s WW3 speech has gone viral on the WWW exactly one hundred years after President Woodrow Wilson declared the entry of the United States into World War I.
Likewise, it is no accident of fate that this momentous political sermon was given by a man named Benjamin H. Freedman— a man who sought to free the whole world with the most highly consequential truth of the 20th century.
That same truth, of course, has predictably dictated the destiny of the world community of nations during this 3rd millennium.  Hence, the fate of humanity now hangs in the balance … as does the future of planet Earth.  Which brings US to the only logical conclusion that can liberate all of humankind from the ravages of war, once and for all.

To publicly render such searing testimony in our nation’s capital in 1961 took a tremendous amount of courage, faith and intestinal fortitude.  No one had ever before exposed the elaborate Zionist plan to start the first two World Wars; nor has anyone since, especially in a major venue in Washington, D.C.  To his great credit, Mr. Freedman also expended large sums of his own money to further reveal the highly organized conspiracy to stage World War III.
Freedman’s story is quite instructive for the current generation.  It’s particularly didactic from a civics lesson standpoint.  His various heroic initiatives, conducted on behalf of his fellow Americans, show how every U.S. citizen can also assist this valiant endeavor to avert another World War.  What better way to honor Benjamin Freedman’s monumental sacrifice to humanity than to disseminate his teachings which set the historical record straight?
Because of the relentless rush to war by the Zionist Neocons strategically positioned throughout the Western powers, Freedman’s message is more urgent than ever.  The best insurance policy against yet another world war is the accurate retelling of the real causes the First and Second World Wars.  By widely disseminating that revised history, as well as the ongoing plot to instigate a Third World War, perhaps peace will break out across the planet instead of war.

‘Those who cannot remember the past are condemned to repeat it.’

OUT OF MIND » THE INSANITY OF REALITY » GOVERNMENTS & THE NEW WORLD ORDER » TIME CAPSULE: The Man Determined To Prevent World War III