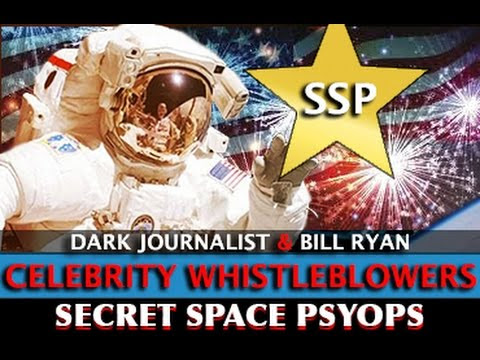 The Most Important Interview of The Series!
In this fascinating and wide ranging conclusion to the 3 part interview series by Dark Journalist Daniel Liszt of Project Avalon’s Bill Ryan, they continue to peer through and untangle the tangled web of mind control entertainment memes that are being developed by Corey Goode and David Wilcock around the topic of the Secret Space Program.
The cartoonish narratives and unvetted claims of blue avian aliens selecting Goode to be a time traveling astronaut have strained even the open minded UFO research community and the latest developments of Goode’s tale being launched as a comic book appears to sacrifice the final shred of investigative value to a case that has called into question the rationale and integrity of the New Age media production company Gaia TV.

The Celebrity Whistleblower Problem
In the course of 70 years of research into UFOs and over a decade of research into the Secret Space Program many retired Military personnel, Astronauts, and covert operators have come forward and shaped a legacy of whistleblowers that have risked tremendous repercussions to bring us the truth that the Government and the Media have kept behind a wall of total secrecy. In the case of UK hacker Gary McKinnon, he risked decades in prison to leak information concerning the fact that the United States had developed an Off-World Officer fleet with no public awareness of the program.

Recently, we’ve seen a disturbing number of individuals with no credentials, no evidence and no verifiable paper trail come forward for their 15 minutes of fame and claim to be involved as key members of this covert program. The problem is with nothing to back up their story and the additional claims they make of being messengers of elaborate galactic beings, the entire trend seems almost engineered to discredit legitimate research into the missing trillions gone from the federal budget. It is theorized by research experts like Former Assistant HUD Secretary Catherine Austin Fitts and Oxford Scholar Joseph Farrell that the missing money is being pumped into a secret space infrastructure that has no public accountability. That verifiable line of inquiry is often drowned out by the celebrity whistleblowers and their predictions of imminent ET Disclosure and the ascension of humanity through the intervention of a Space Alliance.

Psyop or Sellout?
Ryan’s article ‘The Truth About Corey Goode’ that set the stage for this informative series of interviews basically asks the question: are we looking at a psyop being perpetrated by intelligence groups to take the attention away from legitimate UFO research and replace it with story lines that won’t hold up to scrutiny and celebrity whistleblowers that will eventually be discredited and discarded by the unscrupulous entertainment companies that seek to profit from the confusion around the entire Secret Space Program topic.