Witness: I was at the Teign Estuary taking photographs of passing planes when I spotted what at first I thought was a passenger plane. 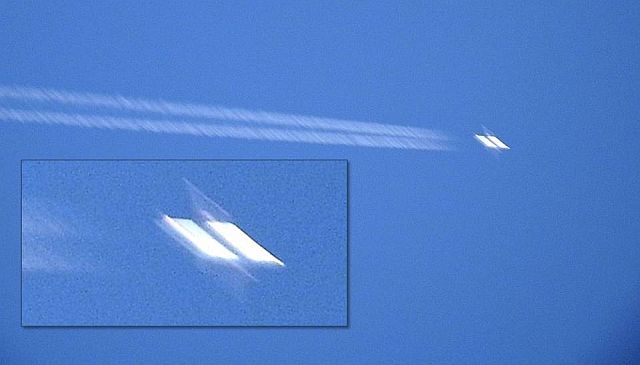 I started to zoom in with my Nikon P900 only to be shocked by what I saw. It was no passenger plane it appeared to be two white rectangular sections that were somehow connected and from the middle section there were two protruding transparent square flaps.

This is totally bizarre what kind of aircraft would have this kind of configuration? 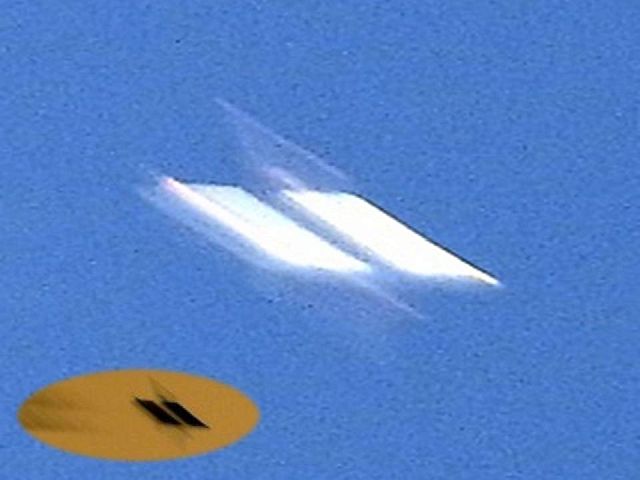 I photographed the same bizarre object over the Teign Estuary back on the ‎10th of ‎April 2017 at 2:46 PM for the first time and this photograph was taken on the 24 ‎May ‎2017, 5:15 PM once again at Teign Estuary Devon England on which I decided to report the sighting to Mufon under case nr. 83956.

Editor’s note: 1. UFOs usually leave no contrails. 2. Since the photographer has photographed the object twice at the same location but on different dates, could it be a secret UFO-like craft which is being tested by the military/government?

Unknown Objects captured during Space Walk outside the ISS

NASA astronauts Peggy Whitson and Jack Fischer are preparing for an unscheduled spacewalk outside the International Space Station Tuesday, May 23, 2017. Whitson, Expedition 51 commander, and Fischer, flight engineer, will replace a critical computer relay box that failed May 20. The relay box, known as a multiplexer-demultiplexer (MDM), is one of two units that regulate the operation of radiators, solar arrays and cooling loops. They also route commands to other vital station systems.

During the spacewalk the live camera recorded not only the astronaut's activities outside the ISS but also two unknown flying objects. Is it just a reflection or the objects may have been UFOs?

Published on May 24, 2017
Corpuscular ship is constructed in detail in accordance with the law of God in the form of light energy. Light corpuscular ship is therefore better as a spiritual power manifested corpuscular ships. The ship can move faster than light. When the object moves faster than light, disappearing from sight. Goes into another dimension.
The human eye sees everything that is inside of the light spectrum. When I mention the light spectrum and hit the light spectrum of the sun. With increased intensity of light would blind man. His senses would not notice a higher form of vibration. It can not therefore see the world resulting on a different frequency, although located around beside him. Corpuscular ship can move at high speed. It is therefore invisible to the human eye. By increasing the energy of the corpuscular vessel there is an increase of its speed. If it goes into the vessel by its frequency, it means that moves slower than the maximum speed. This makes it the human eye sees. It manifests itself in the form of light. Reducing the speed to changing light and the human eye, the ship must appear as a solid object. If the moving ship and if it stays on the molecular level, the maximum rate will remain invisible to the human eye. That they are explained in words that corpuscular ship may be the front door of your house and you will not see it. The ship can come to a man secretly. People of it may remain hidden from man.

I was filming an American Football game in Stuttgart, Germany when I turned around and saw this object hovering in mid air.

I asked my camera man to film this real quickly. He filmed it, sadly not long enough. After he stopped filming, the object flew off...

Published on May 24, 2017
Sometimes it's the very small details that help to distinguish the unusual from what seems normal. As in this case, something that looks mundane exhibits some interesting dark shapes moving. These shapes might be an example of how dark matter is portrayed or controlled utilizing unknown technologies. There is also a subtle color change of lights.

Published on May 24, 2017
At the beginning of the 20th century the aliens decide to change appearance because now nobody believed in elves and fairies, and men were beginning to suspect them. At that time, they began to fly through the sky "zeppelin", which were easy to imitate, but then men believed to see plates or frisbees... (The history of mankind, page 5.980) a strange object flying in the sky...

On the 17th of May, my mother-in-law was visiting downtown Toronto with my wife.

She took some pictures of the buildings on her way home. The next day she was showing her pictures of downtown buildings to her friends at the ESL program where she is studying English.

That is when they noticed that there was a strange object flying in the sky. The picture is really clear, and you can see something flying that looks like a space ship.

If someone out there can identify this object, please respond.