A Florida federal attorney who was investigating against the DNC, specifically, Wasserman-Shultz district, was found dead on a beach with what authorities describe as “head trauma.”

COINCIDENCE?
A lawsuit last year against the DNC was filed in the Southern District of Florida by attorney Shaun Lucas.

Sponsored by Revcontent
A month after Lucas filed the papers to sue the DNC, he was found dead at the age of 38. 14 prosecutors have been killed in 100 years.
One of those was Lucas — the man who served the DNC papers.
The lawsuit was filed on June 28 by Bernie Sanders supporters against the DNC and then DNC chairwoman Debbie Wasserman Schultz, who resigned in the wake of the WikiLeaks email scandal.
And now a young federal prosecutor working in the Southern District of Florida is also found dead. Florida Prosecutor Beranton J. Whisenant Jr., 37, was investigating fraud and visa case in Wasserman-Schultz’s back yard district. Was he working on the case against the DNC?
From wptv.com
HOLLYWOOD, Fla. (AP) — The body of a federal prosecutor has been found on a Florida beach with possible head trauma.

Hollywood police spokeswoman Miranda Grossman said Thursday that the body of 37-year-old Beranton J. Whisenant Jr. was found early Wednesday by a passerby on the city’s beach. She said detectives are trying to determine if the death was a homicide, suicide or something else.
Whisenant worked for the U.S. Attorney’s Office in Miami in its major crimes unit. He had joined the office in January. Court records show he had been handling several visa and passport fraud cases.
Acting U.S. Attorney Benjamin G. Greenberg said in a statement that Whisenant was a “great lawyer and wonderful colleague.” The office declined to comment on the investigation.
Amy Moreno is a Published Author, Pug Lover & Game of Thrones Nerd. You can reach her on Facebook here.

Debbie Wasserman Schultz likely involved in massive cover-up as she is caught trying to interfere in a criminal investigation, threatening police chief
https://www.intellihub.com/debbie-wasserman-schultz-likely-involved-in-massive-cover-up-as-she-is-caught-trying-to-interfere-in-a-criminal-investigation-threatening-police-chief/

Another Set Rich murder? Only this time the victim is a federal prosecutor.

The mainstream media is really getting out in front of the story regarding a federal prosecutor who was looking into DNC voter fraud and possible Florida connections to the murder of Seth Rich.

In their search engine, Google has listed this story under all MSM major publications.

This is called controlling the narrative. What narrative? Hollywood police spokeswoman Miranda Grossman said Thursday that the body of 37-year-old Beranton J. Whisenant Jr. was found early Wednesday by a passerby on the city’s beach. She said detectives are trying to determine if the death was a homicide, suicide or something else.

Homicide or suicide?  The man’s skull was crushed. There are many stunning facts connected to this case which are discussed in the following video.

This article (Federal Prosecutor’s Homicide Connected to Seth Rich’s Murder) was originally published on The Common Sense Show and syndicated by The Event Chronicle.


Debbie Wasserman Schultz likely involved in massive cover-up as she is caught trying to interfere in a criminal investigation, threatening police chief

(INTELLIHUB) — In an absolutely outrageous and transparent abuse of authority, former DNC chairwoman Rep. Debbie Wasserman Schultz used her position on a committee that sets the police force’s budget to not only attempt to undermine an active investigation but also to directly threaten the chief of the U.S. Capital Police.

The Seth Rich Snowball is Officially Out of Control [videos]

If you’ve been online at all, you no doubt realize that this story is getting bigger and bigger, and collecting a lot of ‘extraneous material’ as it gathers momentum. The information is coming so fast from so many sources now that by the time I press “publish” the following will already be old news but if you were out of touch over the long weekend, this will serve to bring you somewhat up to date.
At a time when we take a moment to recognize those who fell to assure our freedoms, we also heed the call to arms, so to speak, as we prepare to do battle globally against the tyrannical hierarchy that can simply go no further in this consciousness, and on this planet.
This will be  an entirely different sort of war, however, as it is almost invisible unless you know where to look. Has there ever been a war where we aren’t even sure who the enemy is? Or what the enemy looks like? This war is like that.
There are now enough people alerted to the threat in America, however, for a “peaceful revolution” to take place, and a key battleground is Washington, DC.
The execution of Seth Rich in July 2016 was a latent volley from the enemy that is just now being acknowledged and addressed fully. To label us “conspiracy theorists” for suggesting an investigation into the death needs to take place is sheer idiocy. The most basic facts are beyond wild speculation. They DEMAND examination.
Unfortunately, the battle for our freedom continues to claim it’s victims. News of the death of federal prosecutor Beranton J. Whisenant Jr., whose body was found on a Florida beach is yet another.

While the police have chosen NOT to investigate the death of Seth Rich, the catalyst in this very revealing dissection of the facts, the ‘new media’ is now on this like white on rice. They are exposing the details and the threads that lead in multiple scandalous directions as we learn in this discussion on Hagmann and Hagmann with an experienced investigative journalist Liz Crokin who took it upon herself to do what the police should have done months ago—had there not been a coverup. She turned up some very interesting facts, I might add, particularly relating to the owner of the bar last visited by Seth Rich. Who knew he’d been to the White House shortly before Seth’s demise…?

Another offshoot: there is now a petition for Trump to force an investigation into the assassination of Seth Rich and the DNC and the Reward fund has ballooned to $345K as of this writing.
To sign the petition calling on the White House to open an official investigation into Rich’s death, click here. You will be required to authenticate your signature via email. Goal: 100,000 signatures in 30 days.
As we know, everything we attempt to do gets infiltrated or coopted by the enemy, (and vice-versa) and it takes expert sleuthing to delve deep enough to ascertain what is what. This video provides a perfect example of why we shouldn’t take everything at face value. You don’t have to watch for long to get the point. They can’t stop the snowball, but they can place diversions to get it off course.

An additional interesting thread of the story… Clinton ties to Uranium One. There are any number of directions inquiries into this web of deceit may take.
As we know, wherever the mass media tells us to look, assume the opposite is true. If they say Trump colluded with Russia, then that is most likely what the existing hierarchy has done or is doing.

Podesta Received $35 Million From Russia While Advising Clinton And Obama

The mainstream media now has no choice but to breach the topic of the murder of Seth Rich, as evidenced by this caustic Huffington Post article. As always, the corporate outlets are reactive and don’t venture down these putrid alleys unless WE force them. At such time as they can no longer ignore an exploding story, they reluctantly jump in with a life preserver ring for damage control.
http://www.huffingtonpost.com/entry/seth-rich-trump-media_us_5927414de4b01b9a59378160
Will they succeed in convincing anyone that the murder of Seth Rich doesn’t warrant an investigation? I think it’s too late for that, but despite how they spin it, it’s interesting how all roads lead to Hillary, isn’t it? 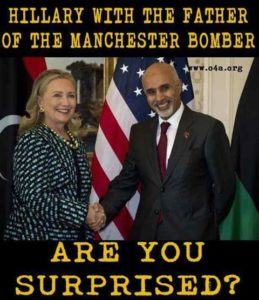 Thomas Williams gave us a heads up on May 28 that things are about to get exciting as a series of events unfold across the planet. His intel sources must have suggested that we’re about to rock’n’roll because he cautioned us to disengage from those still in a trance, strap ourselves in and remain calm and centered no matter what happens. OH—and prepare for some surprises, as not all will be what we expected.
The next show will be Thursday afternoon.

This guy has it all figured out, doped blackberries, stealing cars, to drive people around during campaigns, then sell and donate proceeds to mosques and murders, going on up to 12 years, and he has been at Congress and says atmosphere there is not pleasant, Ha! so funny! maybe they will have their due.