OUT OF MIND » TRUTH IN CONSPIRACY THEORIES? » HISTORIES MYSTERIES » Farmer Makes Amazing Discovery Under His Field 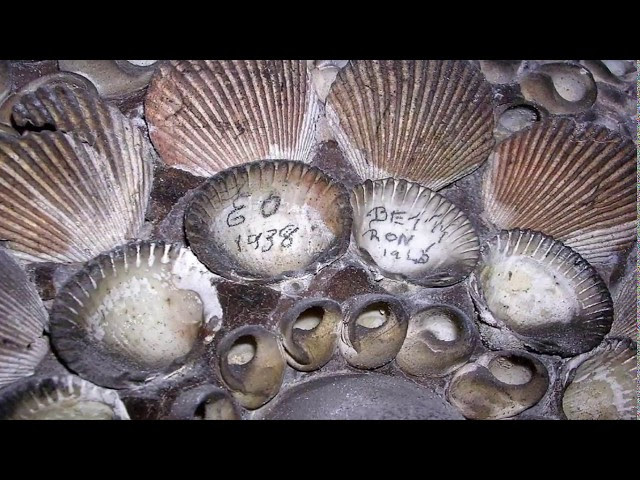 Published on May 30, 2017
In 1835, an unknown labourer in Kent, the UK, was doing his usual field work. when he struck the soil in what could be classified as a lucky spot. Upon impacting the ground his spade disappeared into the Earth, breaking a doorway into an underworld like no other.
The lad soon realised that he was standing on an entrance to hollow underground caverns, that from the surface could not be seen.
Word quickly spread regarding the find, and the curiosity to see what was actually down there soon began to boil over, a local schoolteacher, kindly volunteers his young son Joshua, to make the dangerous trip down beneath the ground to see what was actually down there.

When Joshua was luckily pulled out alive, he described rooms encrusted with millions of carefully arranged shells.
People were obviously a little sceptical regarding the claims initially, yet when the hole was eventually widened, allowing all to see for themselves, they were stunned when the boys accounts were confirmed as completely true.
Now known as the shell grotto of Margate, its origins or purpose still remains a complete mystery to this day.
Almost all the surface area of the walls and roof are covered in mosaics created entirely out of sea shells, totalling about 190sq metres of mosaic, calculated to be around 4.6 million shells.
The underground caverns consist of a passage, a rotunda, and even an altar chamber, the whole thing completely covered in a mosaic of shells.
Several questions obviously, arose from this astonishing discovery under a field in Kent, firstly, how old could shell grotto actually be?
Who could have built such a thing, and why bury it hidden underground?
And probably the most important of questions, where did you get 4.6 million sea shells from?
Steps at the upper end of the grotto lead into a passage about 1.07 metres wide, roughly hewn out of the natural chalk, winding down in serpentine fashion until it reaches an arch, the walls and roof of which here onward, are covered in the shell mosaic.
various hypotheses have dated its construction to any time in the past 3,000 years.
Theories have included that it was an 18th or 19th-century rich man’s folly, that it was a prehistoric astronomical calendar, and even that it could be connected to the Knights Templar.
Interestingly, No publicly known scientific dating of the site has yet to be completed…
The most frequently used shells throughout the mosaic – mussels, cockles, whelks, limpets, scallops and oysters – are largely local. They could have been found in sufficient numbers from four possible bays: Walpole Bay in Cliftonville; Pegwell Bay especially at Shellness Point, Cliffsend, near Richborough; Sandwich Bay, Sandwich; and Shellness on the Isle of Sheppey. Yet the majority of the mosaic is formed from the flat winkle, which is used to create the background infill between the designs…
However, this shell is found only rarely locally, so would have been collected from shores west of Southampton.
Shell grotto is certainly an amazing, yet not very well known find, more scientific research is clearly needed if we are to unravel the mysteries of its incredible construction.

OUT OF MIND » TRUTH IN CONSPIRACY THEORIES? » HISTORIES MYSTERIES » Farmer Makes Amazing Discovery Under His Field