streak of light circling over the National Trust owned land...

The video, taken by a Frome resident, shows a streak of light circling over the National Trust owned land in Corsley.

A UFO has been videoed hovering over Cley Hill near Frome.

Located at the edge of the Longleat Estate in Warminster, Cley Hill has long been thought of as a hot spot for UFOs.

The resident who took this video believes this streak of light could be one such UFO – although he is a little sceptical.

Speaking to Somerset Live, he said: “I took this video from my house in Frome last night. It was over the Cley Hill area I think, which is always a hotspot for UFOs.”

“Probably a drone with a fancy flame effect tail or something. It's been spotted a few times locally.”

For more than 40 years, this lofty hilltop has been a meeting place for UFO spotters, all drawn by talk of lights, flying objects and what have been described as ‘other unidentifiable oddities’.

Nigel Vile, a local rambler, regularly goes on walks around the area.

Speaking of the hill, he said: “Some experts have gone as far as to describe the nearby town of Warminster as Britain’s UFO capital on account of a phenomena first encountered in the mid-1960s that became known as the ‘Warminster Thing.’

“Strange noises were heard in the skies above the town, and an equally strange shimmering light was observed in the vicinity.”

It’s not just in Warminster that these UFOs are spotted, however. There are many towns around Frome that have similar experiences.

Mysterious projectile shooting from a storm cloud towards UFO over Texas

On May 24, 2017 a thunderstorm was in progress in a Texas City. The man who posted the video to the MUFON case management system received the video from a friend. 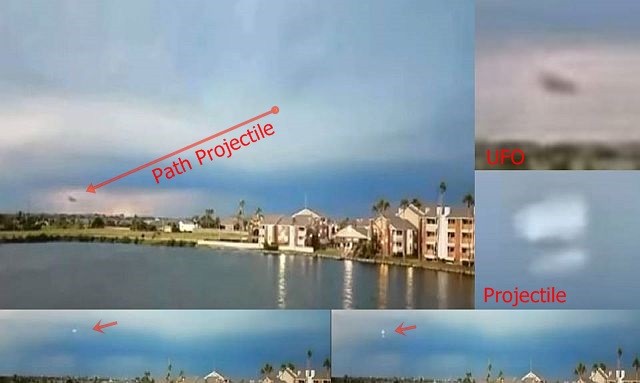 What attracted the videographer was when reviewing the footage he spotted a white flash going from his right to left.

Further analysis led him to discover an unknown object on the far right of the view.

It is difficult to see all of the activity, so we enhanced the video to give the best view. Be patient and you will see the UFO and the projectile being shot which is very easy to spot.