OUT OF MIND » TRUTH IN CONSPIRACY THEORIES? » HISTORIES MYSTERIES » The Secret Missions Into The Great Pyramids

The Secret Missions Into The Great Pyramids 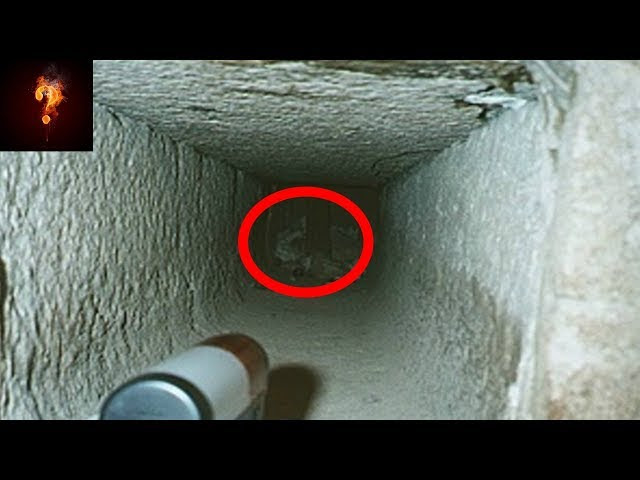 Published on Jun 1, 2017
The Queens chamber, which lays within the great pyramid of Khufu, more commonly known as Cheops, has astonished, shocked, and mystified Egyptologists since its mysterious existence was discovered.
The intrigue into this illusive chamber, along with its mysterious adjacent shafts, comes as no surprise once one understands the anomalous characteristics of their construction.
As we have already covered before massive cover ups have been suspected as taking place surrounding this mysterious chamber, since its discovery. strange shaft tunnels set at a 40 degree incline no larger than 20 cm in diameter run away from this room and no one seems to no why.
Not only would these ancient shafts required being hermetically sealed during the pyramids construction, to stop them from becoming blocked, but the excruciating effort that would have gone into Making them, becomes all the more of a confusing undertaking, once you realise they were not even connected to the chamber, but hidden 40 cm away from entering the tomb within the walls, completely invisible from the inside of the burial room located deep within the structure.
A total of 5 shafts exit the surface of the structures faces. Cheops notably being the only pyramid to ever have been constructed with such shafts, making their addition a popular mystery within Egyptian history.
1 leads out from the subterranean chamber, 2 lead out from a termination point some 40 cm from the walls of the so called queens chamber, or now popularly suspected to be that of an alien tomb among ancient alien specialists, and 2 from the kings chamber above.
Here is where our story becomes interesting, Rudolph Gantenbrink, famous for actually discovering the blocking door within one of the queen’s chambers shafts, which could lead to an as yet undisclosed tomb, has also made other curious discoveries within the great pyramid.
Discoveries which could only be explained by modern, covert explorations of tunnels that were supposedly to that point, unexplored.
Gantenbrinks cache being but one example of these mysterious finds, deep within tunnel systems in the royal chamber, at a 90 degree turn going vertically upwards, a pile of papers, possibly wrapped artefacts, weighted down with a small piece of timber or stone, possibly another artefact, was discovered by Gantenbrinks robot.
Also, during initial location attempts to find access tunnels leading to the queens chamber, several blocking stones required removal, after the removal of the seventh block, a modern era, hexagonal steel rods were discovered discarded upon the tunnels floor…
Each section of the hexagonal iron rods measures 2.7 meters in length, and was fitted with a round socket, which allowed them to be joined to the next section.
In one of the lower shafts In 1872, Waynman Dixon found three more objects which could be considered proof of prior covert exploration of the mysterious northern shafts… A copper "grappling hook" about 5 centimetres in length, accompanied by a small, gray-green stone ball, and a broken-off piece of a square wooden slat or rod, about 13 centimetres long, the wood would today be the most intriguing of his finds, these artefacts suspected to be remnants of the grave robbers tools, could have been carbon dated, yet this fragment is the only one of the three to now be missing out of the London museums collection. Unfortunately, in his writings, Dixon doesn't say in which of the two lower shafts he actually found the objects, but he mentions them in connection with a northern one.
Not only did these obviously highly intelligent people leave evidence of how they must have got in, but also traces upon the previously untouched ancient walls of the shafts within Cheops, clearly left by their previous robotic technologies.
Other, square, metal rods have been recovered, along with other artefacts discarded within some tunnel systems deep within the ancient structures.
Meaning these guys got to the treasures way before we did.
Interestingly, reported evidence of covert excavations continues to this day, heavy duty electrical supplies discreetly running into, and trailing deep into the pyramids, have been noticed and photographs by some of the more astute tourists.
Witnesses to the sounds of heavy machinery being used beneath the site is also frequently reported, yet rarely followed up….
It seems its not a question of whether brilliant minds have achieved the seemingly impossible, in penetrating these secret layers, but more a question of how and what astonishing finds have possibly been kept concealed.

OUT OF MIND » TRUTH IN CONSPIRACY THEORIES? » HISTORIES MYSTERIES » The Secret Missions Into The Great Pyramids