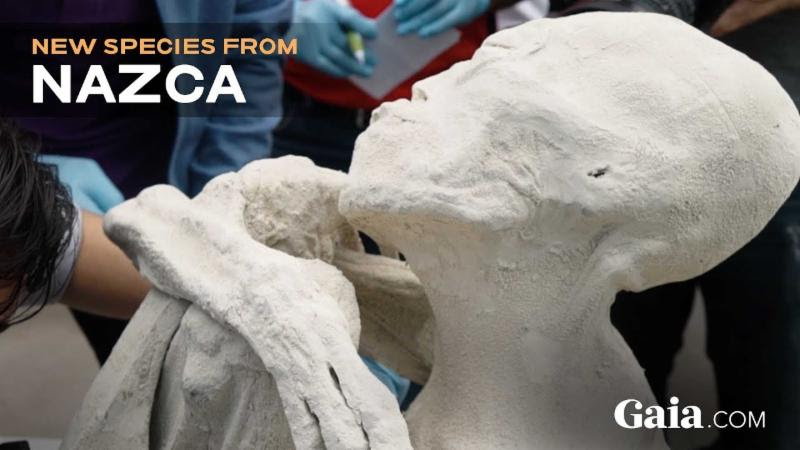 
How many bizarre humanoids have been found in Peru, anyway? There’s Ati, the 6-inch long creature featured in Dr. Steven Greer’s documentary, ‘Sirius’, there are the Paracas mummies curated by Brien Foerster – and now this. For whatever it’s worth, the three-toed alien from Nazca does not appear to be a hoax, at first blush.
There’s something unusual about a large corporation promoting non-mainstream material, such as Gaia’s new series investigating a three-fingered and -toed mummy unearthed in Nazca, Peru. One wonders if this might be some kind of controlled ET disclosure?
Granted, with a net annual income of negative $27 million, Gaia isn’t anywhere near as huge as The Walt Disney Company, with $22.45 billion in media revenue, Comcast/NBC with $19.72, 21st Century Fox with $18.67 billion, Bertelsmann with $10.04 billion, Viacom with $9.61 billion or as the “tech” giants, which evade calling themselves media conglomerates, Facebook with $11.49 billion and Alphabet (Google) with $59.62 billion in media revenue.
Gaia is a very atypical company. It was founded by an atypical man, Jirka Rysavy who bench-surfed US airports, bus stations and parks for three months before defecting from his native Communist Czechoslovakia with his sports visa, as a member of that country’s Olympic Team.
“I knew nothing about business,” he says. “In Czechoslovakia, private business was called ‘illegal enrichment’.” However, his math and engineering background enabled him to become rapidly successful in several businesses, founding Gaiam Entertainment from his Boulder, Colorado headquarters in 1988.
In 1995, Inc. Magazine named Rysavy “Entrepreneur of the Year runner-up”, when he grew his office supplies company into a $1-billion business. In their profile, Inc. listed among his hobbies, “…meditation; pursuit of spartan life in mountain home (only available water must be fetched from spring, even in winter; often cooks and sleeps outdoors).”
In 2012, Gaiam acquired a DVD distributor from Universal Music Group, a subsidiary of the financially-beleaguered French media behemoth, Vivendi and merged it with its home entertainment division, forming Gaiam Vivendi Entertainment. The following year, this was in turn acquired by Cinedigm, a company which was a pioneer in networked, digital projection when the film industry moved away from 35mm film projection. Cinedigm immediately sued Gaia for inflating the value of their WWF division, prior to the sale. Yes. Gaia owns the World Wrestling Federation!
Cinedigm is over $172 million in debt. Gaia has next to no budget for its content production arm. One wonders whether they are compromised by this and if a certain desperation underlies their promotion of David Wilcock and Corey Goode…and the three-digited humanoid?
The reason I know about any of this is because Gaia “bought” the distribution rights to my film 2 years ago and will continue to own them for the next 5 years and I have yet to see a dime (no pun intended).