The Mother of All Rabbit Holes

The Mother of All Rabbit Holes [videos] 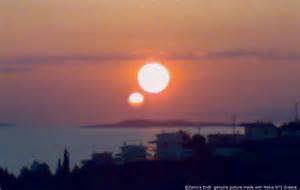 Honestly, I hardly know where to begin, so I’ll just say that over the past week the sun has been different here in the Valley of the Sun near Phoenix, Arizona, and this lends credence to some information I came upon by accident today.
Normally in the summer the sun and the glare are so bright I can’t go outside without squinting. It’s almost blinding.
Recently, although the sky appears blue and cloudless, the sun seems filtered. It’s not as bright. It’s hot here—120 degrees F this week—but the sun is not of the same intensity as before.
On a day with a bright blue sky, it was as though there were an almost imperceptible mist making the sky a less saturated blue and I’d seen no chemtrail spraying. It’s just been weird and it’s difficult to explain.
I landed on YouTube this morning and happened to see a video from Cindy Kaye Currier about a Live Earth Simulator. That was the first I’d heard of that; and several others were listed about a sun simulator.
Perfect timing. I wanted to see what others had to say about the sun because you’ve no doubt seen the many images people across the world have captured of what appears to be two suns, the sun rising or setting in the wrong place, the sun going down and then rising again, etc. Something is just not right in the ‘hood these days.
I’ve also shared a video of the moon with what appeared to be “waves” running through the image as though it were an old TV set where the signal wasn’t coming through properly and the picture was “flipping”, as we used to call it.
There has also been video and accounts from people who witnessed it, indicating the sun has been “flickering”.
And we’ve also heard that Earth was destroyed a long time ago and we are enroute to our New Earth in a simulation like a holodeck on a ship.
Yellow Rose for Texas told us “Ed is dead”. “Ed” is the sun, and we’ve seen Rose’s images from NASA cameras showing it smoking and flaring and “gears” sticking out after the Light forces attacked it.
Below are a few videos from folks who did research on the sun simulator or live earth simulator. They don’t answer all our questions but it’s a start as they do address many of the clues dropped for us like breadcrumbs along the path.
They show us proof the technology exists in documentation, and your eyes can see the video evidence.
Cindy Currier mentions a theory that we were put into these bodies until we could be freed. We’ve also been told that clones break down over time and can’t maintain the corporeal body indefinitely. What happens to Humans over time? We break down. Just sayin’. We need to get our Lightbodies.
The theory surrounding this is really out there—but we also know that from what Thomas Williams has said, the truth about our situation is so extreme, panic would ensue should anyone tell us the reality of it. “What difference at this point does it make?” Perhaps that was a very telling question from Hillary Clinton.
By the way, Thomas will be hosting his weekly Truth, Honor and Integrity Show today at 4:30 Pacific, 7:30 EDT. If I’d had more time after learning about this fascinating conundrum I would have submitted a question or two about this.
From all the vague intel and unverifiable details we’re given via multiple sources, it certainly does seem the outrageous truth simply can’t be revealed because they believe we can’t handle it.
Until such time as they figure out a way to get us where we’re meant to be, and we’re free, we have no choice but to be lead along, all the while wondering just what could be so outside our ability to accept it that we would all go sideways if we knew the reality.
Enjoy the videos. I’m sure they’ll raise a few Spockian eyebrows. Cindy’s is a very good overview or starting point.
No question, this journey we’re taking on Starship Earth is an epic one, and our destination will mean Heaven on Earth. Oh—and it DOES appear that it’s important we keep a positive attitude. Cheerio.  ~ BP
Cindy Kay Currier on the Live Earth Simulator
https://youtu.be/YQL23J9LNIY?t=175
Richie From Boston
https://youtu.be/PV7d79tmImg
https://www.youtube.com/watch?v=jZJcSzO9viU
Joanne Steen
https://youtu.be/2GSiPBqeuJM
Jeff P
https://www.youtube.com/watch?v=KgXv9dhEfqw