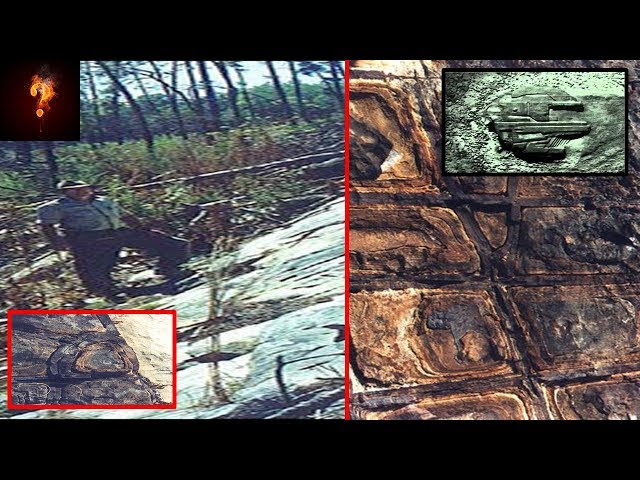 Published on Jun 25, 2017
The following amazing story was published by a David Campbell, on a site known as viewzone, it was a report regarding an incredible find within Oklahoma, subsequently chased up by David and his wife on location.
Although the story gained very little media attention, the details along with the photographs of the event, we found have extremely interesting,
Especially when we took into account our previous research done regarding the strange ancient anomaly, known as waffle rock. A half buried, suspected fragment of a once larger object of possible alien origins, which has remained half buried, resting where it struck the earth all those years prior. Noe submerged under water as the result of a controversial reservoir project which swallowed the stone and the town which had built up around it.
David recalled the event with his wife on the site, they had just returned from a weekly 600-mile distribution route to find a somewhat urgent message from a reader in Colbert, Oklahoma. When they returned his call, he told them about him meeting a man while he was out looking for old arrowheads in the Kiamichi Mountains. This man had found stone tablets with some form of alien writing on them, he seemed eager to go investigate these caves with quote, "little people’s skulls and bones found with the tablets. The caller gave some extremely vague instructions on getting to the place, no names and no call back details, intrigued by the story, they figured the worst that could happen was that they would have a nice Sunday in the mountains.
After getting to the vague location given and after several hours of searching the woods, they eventually came across an extremely peculiar looking, possibly cyclopean wall.
Their initial investigations baffled them, they had never seen ancient stone structured in such a way, they highly suspected that it was of artificial origin due to the small apparent stones, tightly interlocking which made up its structure, it wasn’t until they climbed atop that they must have realised the true scale of their discovery.
From the other side, the stones appear to be a highly complex arrangement of interlocking different mineral or metallic compounds, often displaying a honey comb structure, the layers of which a result of highly accurately cast layers stacked together to make inter connecting blocks of iron like stone.
Sue photographed the wall and cells while David climbed over two more "parapets" to the summit. He recalled on the site, quote, What I saw there began to seep into my brain like ice water. Jumbled about in a haphazard fashion were acres of squared, dressed and notched stones. It was eerie standing on those shattered ramparts with all those tumbled stones like a desecrated cemetery. End quote
Were these strange fragments, possibly once a single and very large object? They clearly share similarities with waffle rock which is located in West Virginia
Are both these anomalous items connected? were they once a part of a very old, and now semi fossilized alien craft?
Many have argued that waffle rock is a natural formation yet others, have always attested to it having alien origins.
What David has discovered may be another piece of the puzzle regarding the waffle rock mystery.
Often cases of strange rocks made up of strange metals are attributed to Furness activity, yet I hope more investigation into this clearly huge and perplexing site is undertaken, and more detailed studies into its clearly complex makeup are completed.
How could this strange object possibly have come to be resting, broken into fragments within an Oklahoma forest.
another strange object made from a similar anomalous mineral, metallic like material is the ancient Baltic sea anomaly, are both of these strange artefacts ancient spaceships? More details regarding David and Sues curious discovery is clearly needed, we will keep you posted.
http://www.viewzone.com/sender.html