» Max Igan - WAKE UP! We're All Being Played

June 27, 2017
Mehran Tavakoli Keshe’s big court case just happened in Kortrijk Belgium on Monday June 26, 2017, and he and his wife Carolina De Roose may be facing jail time for fraud and human experimenting. We are waiting for the verdict said to come from the judge on August 7, 2017.
During the court case Keshe’s lawyer was defending Keshe against illegal medical practices that Keshe had been performing and charging patients for.  Keshe claims to have paid everyone back, but Dirk Laureyssens a former working partner turned whistleblower attended the trial and testified that Keshe did not pay back the money and continues his illegal practices on an international level.  While Keshe claims to have millions of supporters, only around 6 people actually showed up to support him at the trial. There is another court case against Keshe being filed by Dirk Laureyssens who will be going after Keshe for as much as 10 million Euro in damages. 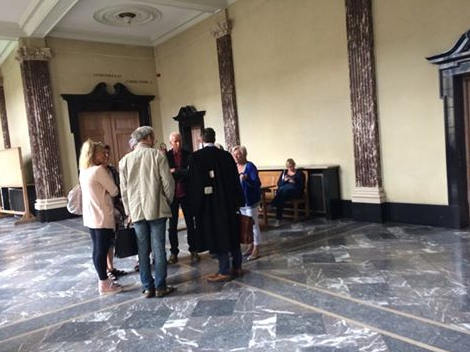 Picture from Keshe’s court case in Belgium, courtesy Keshe Victims FB group.
For those who are just tuning in to the saga, allow me to provide a little bit of background from our perspective. Last year Tivon and I did an honest inquiry into Keshe plasma Technology. We set out with the best of intentions, coming from a professional engineering background, we were hoping to be able to summarize a great technology and to present it in a good light. Unfortunately it did not turn out the way we planned. Soon after we started investigating Keshe tech, we found A LOT of problems with the technology. Also ,we were presented with testimonies from people calling themselves “Keshe Victims” some of the stories were just horrifying. To top it off we were sent a copy of an arrest warrant for Keshe and learned that he’s wanted for fraud and human experimentation.
Regardless of these revelations, we still tried to be neutral and give Keshe a chance to explain his side of the story.  When we approached the “Keshe Spaceship Institute” and started asking a few questions about such accusations, we received an outlandish threat from Keshe’s wife Carolina de Roose, threatening to fabricate a story that would label me as being a pedophile in charge of a child sex trafficking ring.  Such threats were ludicrous and I felt, were coming from a rather unhinged individual. Nevertheless, Keshe followed through with his threat and made videos and publications accusing me and my organization of such things.   I would later learn that this is Keshe’s motus operandi. There is a definite pattern with Keshe and his wife. This being, the moment they are questioned about their technology or exposed as frauds, they will call you a pedophile as their main defense. Plus, they appear to have an extensive and well funded network of fake news reporters and online propaganda dis-info agents to help carry out such defamation campaigns. Keshe and his wife have done this to dozens of people, many of whom can be found in the “Keshe Victims” group.
We did an investigative report on Keshe and put all the evidence that I had found out on the Hopegirl blog and in an extensive 3 hour show. We reviewed the technology, the medical cases where Keshe was accused, the millions of dollars in fraudulent sales he’s acquired from people who want their money back, the arrest warrants… everything. In response to all of this evidence I was continuously attacked.  I ended up pulling all my Keshe articles and videos because it just wasn’t worth it to me anymore. We live in a time where people will choose to believe a lie, so I figured I would just let them. Heck, I tried.
Keshe’s  loyal disinfo propaganda supporters/promoters include Kerry Cassidy, Sean Maguire and Gordon Duff from Veterans today.  To add to this, there are many new age zealouts out there who continue to promote Keshe despite the growing mountain of evidence against him.
It looks like the prison sentences will be 30 months for MT Keshe and 24 months for his wife Carolina De Roose. Many of the victims of Keshe’s fraud and illegal practices don’t feel that this is enough time. I guess we’ll all just have to see what the verdict is.
Join the Keshe Victims Facebook group for updates, and check out the keshefacts blog.