You can support Victurus Libertas on Patreon at .... https://www.patreon.com/victuruslibertas 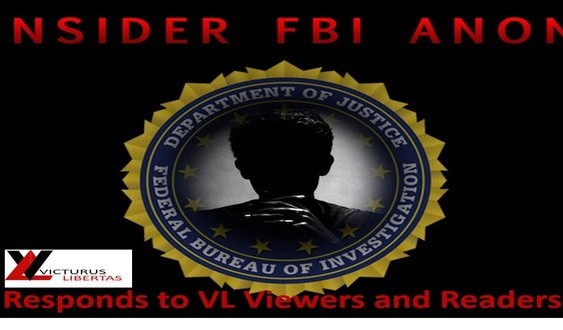 A few of our loyal viewers and readers at Victurus Libertas know we are sometimes able to get in touch with FBI Anon.  It had been a while since we heard from our friend, so a  few of our followers have been periodically sending me emails, asking me to forward questions to FBI Anon.  I have been saving and collecting the questions along the way and I did get in touch with the now famous FBI Anon.  The questions, along with responses are as follows:
Q:  Do you think Trump is part of the swamp now that arrests have not happened and it is know that Trump took Soros money?
FBI Anon: It’s clear Kushner has done deals with Soros, including a large loan. Trump’s ties to Soros have not been a subject I have investigated.
Q:  Were you, or other FBI patriots, behind the recent FBI Twitter Vault tweet about corrupt FBI Director Hoover, while Sessions was testifying about corrupt FBI Director Comey?
FBI Anon:  This was a bit of fun we engaged in. Not myself, but others who are among dozens of agents assigned to post on our social media platforms.
Our old guide use to instruct “They should refrain from disclosing on any section of their user profiles that they work for the FBI or the Department of Justice,” the guide states. “FBI personnel must also consider each word that they post, as these posts will remain indefinitely in cyberspace.” But with the West getting wilder, certain agents go “rogue light”, as was the case with those tweets.

Q:  How do you guys get away with these tweets when traitors like Comey and McCabe are in charge, and the Inspector General is investigating these tweets
FBI Anon:  We have our own tool kits, like Socio-Spyder for instance, We realize the bureau is under increased scrutiny;  most of us feel like we should not be painted with the same brush being used on the top brass. We are well embedded on all the platforms. We can LARP with the best of them. But we are also feeling that the public has a right to demand arrests of people in high position who have committed crimes. No man is above the law. But, most Americans rightly feel talk is cheap.  It’s time to bring down the pond scum on the top of the swamp and work our way down to the monsters underneath.  As I said a year ago, how can you expect a corrupt Government to self investigate?
Q:  When is the “leave of absence” going to happen for Kushner?
FBI Anon:  It’s being arranged. Kushner has hired criminal defense attorneys – good ones. As long as they keep to Russia, and do not look too deeply into his ties with AIPAC and Mossad, he will be okay.
Q:  How likely is an American Revolution this summer?
FBI Anon:  Not likely. If anything, expect more riots, soft terror, and an Israeli lobby drumbeat to attack Iran, and overthrow Assad. But, the American people are waking up to the plans unfolding. The sudden arming of Saudi Arabia and the so called “rebels” in Syria are upsetting to Americans, who generally do not trust the Saudi government and are increasingly suspicious of Israel’s motives. Anytime you hear “Russian leaks” from main stream media, replace the word Russian with Israel. Israel wants Russia and America to be in a war stance. In this scenario, Israel gets to shoot down Syrian jets, America gets to increase arms to Saudi Arabia, and US operatives, directed by John McCain, gets to re-arm Isis. The goal is to remove Assad, build a pipeline with Saudi funding, and ultimately leave Iran and Russia vastly weakened. A true revolution will occur when the citizens take a little time to study the French revolution.
Q:  Why won’t the government stop the corruption within the unconstitutional family courts and CPS?
FBI Anon:  Because its a money making racket. It’s a sore spot with me, because the abuse is rampant throughout the nation. Children are kidnapped by the State. Parents arrested and courts intercede on behalf of CPS to keep parents and children separate. In California, it’s horrible. The criminal justice system in both New York and California is broken, crooked, and criminal – beyond belief. We took down the Los Angeles Sheriff a couple of years back. We have eyes on a number of small towns where public corruption has existed for decades.
You can expect some news this year when we submit our findings to DOJ. Expect news also regarding Loretta Lynch, and John Brennan. There are more names, but I am not at liberty to mention them.
Posted by enerchi at 6/29/2017 12:42:00 PM