OUT OF MIND » THE INSANITY OF REALITY » CERN LHC » CERN Breaks Particle Collision Records; Switzerland Hit by Swarm of 73 earthquakes…Coincidence? 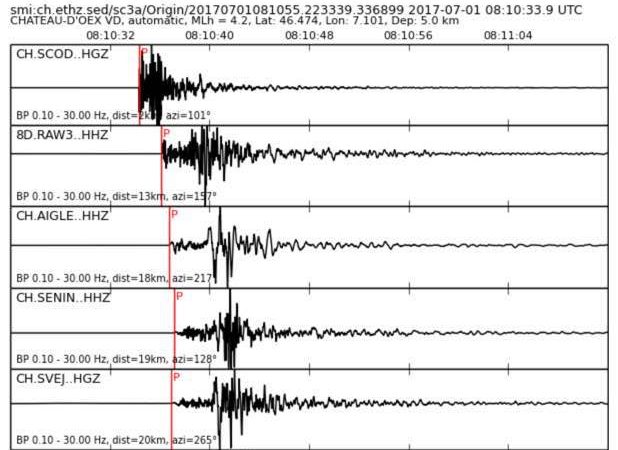 A swarm of earthquakes hit Chateau d’Oex in Switzerland on July 1 2017. Is it linked to or enhanced by CERN activity?
Just for FYI, here is a quick and basic description of the record CERN broke on June 28, 2017: “On Wednesday 28 June 2017 the LHC established yet another record-breaking high, with 2556 proton bunches circulating in each direction of the accelerator. That’s an unprecedented number of particles reached in record time.”
While I cannot be sure there is a connection between the activity at CERN and the earthquake swarm that is currently hitting Château d’Oex…it is strange, really strange!
strange soudns reports:
More than one hundred earthquakes are shaking Switzerland since the CERN ramp up over last 48 hours. Only today, about 73 earthquakes shook Château d’Oex, with a M4.2 quake that was felt over a large part of Switzerland.
Following the M4.2 earthquake, some people reported noises and booms after the shaking that lasted between 2 and 10 seconds depending on the location.
On June 28, 2017, the CERN broke a new luminosity record for the LHC, in other words, the number of potential collisions per second and per unit of area.
Did this enhanced activity at CERN trigger this quake swarm?
The LHC, run by the European Organisation for Nuclear Research (CERN), is the world’s largest and most powerful machine and used to collide particles at close to the speed of light in a bid to discover more about physics and the possibility of parallel universes.
Some have already hpothesized that new super high-energy experiments at the CERN Large Hadron Collider (LCH) could have been responsible for the huge earthquakes that struck in Italy in August and this month.

It looks like CERN is purposely trying to create a stargate, but the planet will suffer earthquakes in their failures.
Here are some of the sounds CERN accelerator makes:

*Reminds me of a bit of 90’s Techno music sounds.. strangesounds

I found this on what appears to be a reputable site and many other quake sites corroborate the information. There was 1 not 73 quakes in Switzerland so far in July.

[size]
We are spiritual beings evolving and TPTW are doing everything to prevent our evolution. Total BS IMHO. We're either told the galatic cavalry are coming so we can sit back and do nothing or the galactic cavalry are being wiped out, in which case we once again sit back because all is lost and we can do nothing. Either dumbing down or fear porn and everything in between but IMO the main purpose of all of this is sit down and do nothing. I think very, very few people working at or affiliated with CERN actually know what's going on there. As is probably the case with much of what goes on in the world today. So much IMO is a total circus and so many are the clowns and performing animals in this massive circus. IMO there is a little (very little) truth in fulford, sorcha, mount, keenan, etc. to make them appear relevant. Meanwhile their main focus is to put our spiritual search and evolution on hold and I am not buying that. Through the recent loss of a loved one I am seeing things I've never seen especially the beauty and power of the human spirit. It saddens me to see how this beauty and power are being ignored, mocked or attacked all IMHO to keep us in darkness when in reality we are surrounded by brilliant light and love. Just my opinion.[/size]

OUT OF MIND » THE INSANITY OF REALITY » CERN LHC » CERN Breaks Particle Collision Records; Switzerland Hit by Swarm of 73 earthquakes…Coincidence?