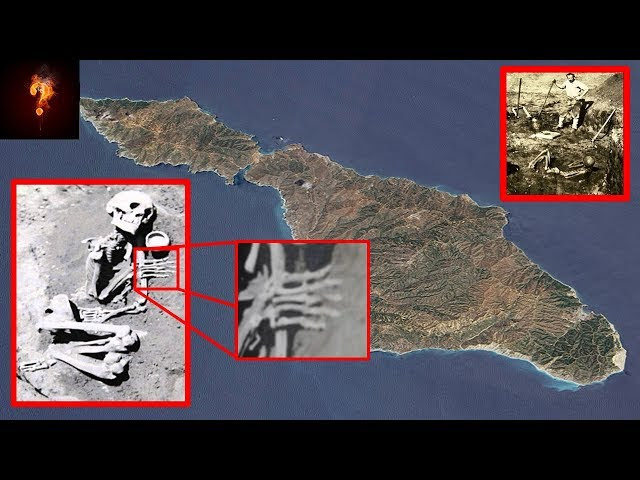 Published on Jul 3, 2017
Ralph Glidden has a rather interesting story to tell, a story which he continued to tell well after his death from beyond the grave...

While digging on Catalina Island in the Gulf of California between 1919 and 1928. He found, according to him, and numerous newspaper articles from the time, numerous skeletons, but what made his claims particularly interesting however, was the claim that their average height was around 7 to 9 feet.
The question arrived at, by all those who have heavily researched his story is, where are these skeletons today?
Could it really have just been a publicity stunt? - or did Glidden actually, somehow, find the remains of a lost race of giants?
Santa Catalina Island, also just known as Catalina Island, is one of the Channels Islands off the coast of California in USA.
The Channel Islands holds the title as the location of the earliest evidence for seafaring in the Americas, and also the earliest evidence of humans in North America.
Ralph Glidden who worked on the islands for several decades, was an amateur archaeologist who successfully uncovered ancient burial sites on Catalina Island.
From 1919 to 1928: it is said that he excavated more than 800 grave-sites from about 100 individual locations around the island.
In addition to finding thousands of artefacts he also stated that he dug up almost 4000 human skeletons, a claim which has often received allot of negative attention, many claiming he lacked respect for the dead.
However, his reasoning was quite profound, He claimed that there once lived an advanced, ancient race of tall, fair haired Indians on Catalina Island and the adjacent islands.
With the male adults around 7 feet in height, the largest skeleton he claimed to have found being that of a towering 9 feet 2 inches tall being. Glidden lost his sponsor after digging for almost 10 years and the general opinion today is that he was just bluffing about finding giant skeletons, with the motive of creating interest and making money.
however, he never made much money from his finds, and received little financial attention. Additionally, Ralph Glidden was not the first to find a giant skeleton on Catalina Island. According to Pittsburgh Press July 20, 1913, and also the Daily Telegraph on July 26; a German naturalist named Dr. A.W Furstenan unearthed an 8-foot skeleton on the island. The skeleton was found with artefacts such as mortars, pestles and arrowheads; all different from the ordinary Indian burials, Plus a strange, flat stone, bearing unknown symbols. Furstenan had, while in Mexico, heard the legend regarding the noble race of giants that had once lived on Catalina Island, long before the white man had arrived. He would find the skeleton along Avalon Bay, in black, hard sand, yet alas, the remains have since vanished.
It is not only on Catalina island that giant skeletons have been found, all over the islands there are countless reports. According to several newspaper articles, Santa Rosa Island was the site of a dig in 1959 where they discovered several skeletons more than 7 feet tall. The tops of the skulls were painted red, and the skulls were described as having sloped foreheads. On San Nicolas Island west of Catalina in 1897, a party of relic hunters stayed three weeks on the barren island and Newark Daily Advocate, would subsequently tell of them finding "Bones of a Giant Race on San Nicolas Island" whether these bones finally, made it into private collections is unknown.
In 1930 Glidden was ready to sell his collection including his whole series of secrets regarding the island. In return, he requested an annual annuity for life, funding for five expeditions, and the necessary financing for various planned publications that included a large monograph chronicling all of his excavations. But it seems, sadly, regardless of Gliddens confidence, nobody wanted to buy his miraculous finds, and in 1962, at the age of 81 years old, he sold his collection for a mere $5,000.
Just 6 years later Glidden died.
However,,
In March 2012, an unlabelled box was discovered, resting deep within the Catalina Island Museum archives. In this box, was Gliddens collection of secret records.
Among which, was, most importantly, a series of unique photographs showing Ralph Gidden indeed excavating one of his authentic, giant, and very ancient skeletons.
http://www.sydhav.no/giants/catalina_...

» THE GIANTS OF THE SOLOMON ISLANDS AND THEIR HIDDEN UFO BASES
» Swallowed by the Sea: Gone Are 5 Islands of the Solomon Islands
» Three-Fingered Mummy Update: They Were Once Alive
» Strange Discovery: Three-Fingered Alien-Looking Hand Found in Peru
» Jeff Rense & Jay Weidner - 3 Fingered ET Mummy Found In Peru