Update: Neighbor testifies they heard screaming just before the ‘jumps’ according to the Heavy…
At about 5:45 AM, Friday July 28 just before dawn, a well known holistic Manhattan doctor and his wife allegedly jumped to their deaths, leaving typed, separate suicide notes in their pockets sealed securely in ziplock bags. (You get to decide how you feel about that. Also, can you think of the last time the news published a picture of a suicide note? Me either.)

Glenn and Patty Scarpelli in happier times – credit FACEBOOK
They were found on the street shortly before 6am by a shocked woman who worked at nearby store.
At the bottom of the page you will find a GOFUNDME link for their children, who were upstairs when they allegedly jumped from their deaths from their holistic clinic building in the middle of Manhattan.
We find it interesting (if not absurd), that the few mainstream outlets who reported the news initially stated they killed themselves over Obamacare which wasn’t repealed a few hours earlier. Then we watched some of the headlines change (ours never did) as they switched the narrative to say it was because of financial woes as described in the typed notes.
An initial article which was commonplace as many scrambled to change their titles: 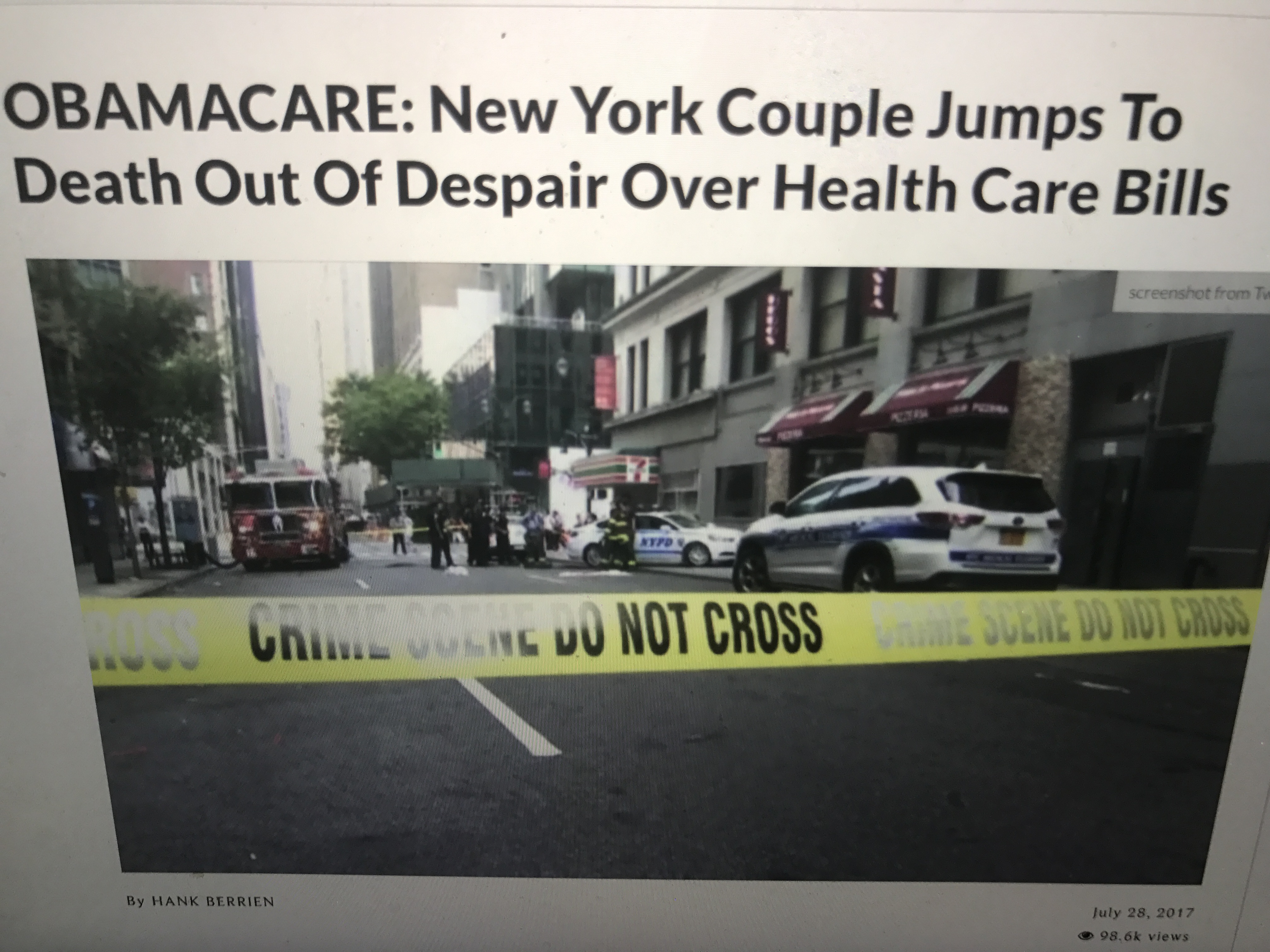 “The bodies of 53-year-old famed chiropractor Dr. Glenn Scarpelli and his wife, 50-year-old Patricia Colant, were found in the middle of the street on 33rd Street between Park and Madison avenues in Murray Hill after the pair jumped from the ninth-floor window of a 17-story corner office building on Madison Avenue at about 5:45 a.m., police said.
Glenn, whose office was on the same floor of the building where the couple jumped, titled the suicide note found in his pocket, “WE HAD A WONDERFUL LIFE.” It was typed on a piece of white paper.”1

His wife also had a suicide note in her pocket asking that someone take care of their children who were upstairs.
And speaking of their children, what – do you suppose- was the reason they would leave their children and jump to their deaths? Debt. They were in debt. Allegedly.
Those who were in the area after the couple jumped were stunned. One woman who works at a nearby 7-Eleven said, “When I got here at 6:05 a.m., I walked by dead bodies on the ground. I was scared. I’ve never seen dead bodies before.”2

We don’t know much else at this time but had many friends in common with Dr. Scarpelli and our heart goes out to their family. We will update you as soon as more information becomes available. HERE IS THE GOFUND ME for the kids – we always share these for the families and thank the thousands who have donated because of them. XO Erin