OUT OF MIND » TRUTH IN CONSPIRACY THEORIES? » HISTORIES MYSTERIES »  Nazca Mummies Maria and Victoria An Analysis by Eric

Nazca Mummies Maria and Victoria An Analysis by Eric

Nazca Mummies Maria and Victoria An Analysis by Eric

July 27,2017: This article has been updated to include a hypothesis based on results of carbon dating. 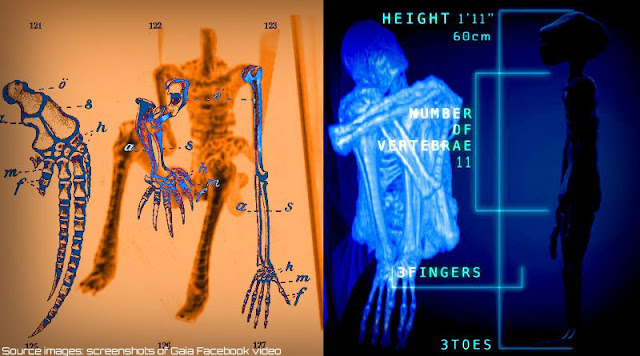 (Eric) The discovery of Maria, a highly unusual three-fingered and three-toed Peruvian mummy, created a stir in the paranormal field. Maria was reportedly discovered in an underground area with smaller bodies which were also three-fingered and three-toed. Gaia’s research team was not initially permitted to take samples from any of the smaller bodies. However, in July, the team was given access to one, from which they were allowed to take samples for carbon dating and DNA testing. This smaller body was given the name Victoria by the researchers.

At a casual first glance, Victoria seems to be a smaller version of Maria except that it is missing its head. However, my closer examination of the publicly available data leads me to believe that Maria may once have been a genuine non-human living being, but that Victoria might have been expertly constructed. If this is true, the actual situation may be even more intriguing than if both Maria and Victoria were once living beings or products of human hands.

Be Fearless and RUN at the Truth!
The following is my analysis of the current publicly available information on Maria and Victoria. I am comfortable with being wrong as I never make any claim of having the truth — just that I am doing my best to find it. I believe that the fear of being wrong is used as a control mechanism against truth seekers. It is spread throughout the paranormal field like a cancer. I constantly see comments like “how dare you make the suggestion that Maria might be real. If it turns out to be a fake, it will set the ufology field back decades.” So what if you are wrong?—keep on going in earnest and eventually, you will be right. Are we still children in fear of what our classmates might think? There must be an open conversation and sharing of ideas without fear. The fear of being wrong is used to slow down investigations to a speed that the cabal can direct through embedded agents. I am completely comfortable being proven wrong on every single point in my analysis of Maria and Victoria. Each time we are proven wrong, we take a step. We must take many, many steps to reach the destination of the truth, and no one will win a race by being timid of each step. RUN that race!

Maria appears to be a genuine mummified body. Evidence for this includes the apparent uniform largely unbroken skin which folds, wrinkles, and hangs naturally without being too loose or too tight in any one area.

The bone proportions and shape are also consistent with a genuine skeleton. The overall form of the skeleton is harmonious and does not appear unbalanced which would be the case if the body was made by piecing together bones from multiple bodies. The seemingly unbroken skin covering the skeleton also goes against that possibility.

CT scans show that Maria’s inner organs are still intact within the body. If someone were to “fake” a mummy, I believe they would likely remove the inner organs because leaving them in would increase the body’s rate of decay and make a successful mummification less likely. Also, notice the clearly visible tibia and fibula bones in the lower legs and radius and ulna bones in the forearms. I will discuss their importance later when comparing Maria with Victoria.

Analysis of Victoria
Compared to Maria, Victoria’s body seems stiff, unnaturally posed, and unbalanced. It looks like something put together by human hands. The skin does not hang or wrinkle in the natural way that Maria’s does.

The fibrous “tendons and arteries” in the area of Victoria’s neck appear more like plant fibers to me but I could very well be wrong. Gaia seems to be investigating this responsibly and has sent it to a laboratory for analysis. The following picture is of Victoria’s neck on the left and a baked Japanese sweet potato on the right.

This next image comparing Victoria on the left with Maria on the right highlights the difference between their rib cages. Maria has a sternum (easier to see in other publicly available pictures) and her ribs beautifully curve in to reach it. I do not see a sternum in Victoria and her ribs appear to be unnatural flat bands which continuously encircle the body with no beginning or end.

The first thing which struck me as odd about Victoria was that it did not have tibia and fibula bones in the lower legs or radius and ulna bones in the forearms. Tetrapods (four-limbed vertebrates including primates, humans, reptiles, birds, frogs, whales, etc.) have those bones or bones homologous to them. In rare instances, like in the case of frogs, they are fused together.

Hominid wrist rotation comes from the radius and ulna twisting and untwisting around each other. Without this dual bone structure and the ability to rotate our wrists, we would not have survived as a species. With Victoria’s single bone forearms, it seems it would be unable to rotate its hands either to face toward or away from its body. Victoria would be unable to perform simple tasks such as feed itself, grab a vertical object like a hanging rope, wash itself, or make or use tools.

Different Periods
According to Gaia’s third update to their investigation, two samples taken from Maria were independently radiocarbon dated with almost identical results. She was from around AD 245-411. In the same update it was revealed that samples from the smaller body, Victoria, were dated to be from a more recent time of AD 987-1145. This means that Victoria is from a period about 740 years later than Maria.

Pre- and Post-Muhammad Accord
The carbon dating results for Maria and Victoria have an intriguing relationship to the Muhammad Accord. Corey Goode stated that in the past, various extra-terrestrial and advanced Inner Earth beings were openly interacting with surface humanity and sometimes battling against each other in the skies. However, in the mid-7th century, several of the non-human groups determined that this was detrimental to humanity’s development. A treaty was signed agreeing to remain hidden from humanity and to only manipulate its leaders. This treaty is referred to as the Muhammad Accord because it was agreed to shortly after the lifetime of the Prophet Muhammad. Many ancient myths, legends, and religious texts from the period before the alleged signing of this treaty contain information which may be interpreted as evidence of open non-human interaction.

Maria, which appears to have been a genuine living being, is dated to a period well before the Muhammad Accord. It is possible that during that time of open extra-terrestrial contact, Maria was interacting with surface humanity. She may have been given a burial in a protected underground tomb out of respect for her. However, Victoria is from a period about 400 years after the Muhammad Accord. During this time, people may have longed for the interaction that their ancestors once had with extra-terrestrial beings like Maria. Great care and craftsmanship would have been needed to construct Victoria. Perhaps it was made as a sort of religious relic related to the honoring of Maria. The practice of preserving and sometimes fabricating religious relics is found throughout the world, so it is possible that the ancient peoples of the Nazca region also did so. [Note: relics can be gruesome, so please do not click on the following links of examples if you are of a sensitive nature.] One example of likely constructed relics are the Shinto and Buddhist cryptid relics of Japan. There are other examples, both genuine and of questionable authenticity, related to other religions like Christianity and Islam.

From the available evidence, I believe that Maria was once a genuine living being from over 1,600 years ago. I believe that Victoria was not a living being and was constructed at a later time, perhaps to somehow honor Maria. However, I fully expect for new evidence to cause me to alter those beliefs. I look forward to further updates of Gaia’s investigation into these unusual ancient bodies. May my preliminary analysis be proved right or wrong; we will be closer to the truth. Until then, keep running fearlessly ahead.

Photo by Michael Warren / CC BY 2.0 / cropped and vibrance increased
http://disclosurebackpack.com/nazca-mummies-maria-victoria-preliminary-analysis/
Posted by enerchi at 7/28/2017 11:17:00 PM

OUT OF MIND » TRUTH IN CONSPIRACY THEORIES? » HISTORIES MYSTERIES »  Nazca Mummies Maria and Victoria An Analysis by Eric