OUT OF MIND » CONSPIRACY THEORIES & ENDURING MYSTERIES » HISTORIES MYSTERIES » What Is The Smithsonian Hiding?

What Is The Smithsonian Hiding? 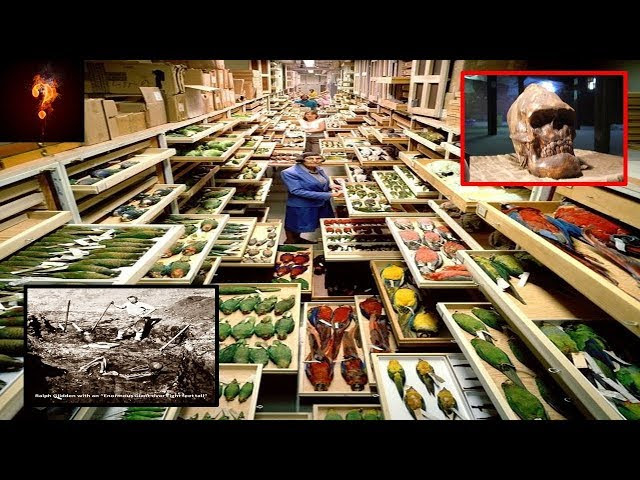 Published on Jul 31, 2017
Just what could The Smithsonian be hiding?
Established in 1846, it is a tightly knit network of museums and research centres exclusively, and uniquely funded by the united states Government
Nicknamed "the nation's attic”… and for good reason.
Made up of nineteen museums, nine research centres, and even a zoo, It is the official resting place for over 154 million historically valuable items,
With an annual budget of around 1.2 billion public dollars, two thirds of which, coming from annual federal appropriations… It is safe to say that if the institute needed to hide something, it would undoubtedly have the financial clout to do so.
Through the years the meddling in which the institute has been reportedly involved in, can be seen as not only overwhelming, but condemning of a hidden agenda.
During our extensive research into alternative and controversial historical discoveries, we have often been confronted with such statements as;
“The Smithsonian people will be highly pleased to get their hands on this.”
Though unfortunately, these sorts of condemning phrases have all but disappeared from main stream media as the years have passed, they still do indeed exist within newspaper archives, stored within the libraries of earth, and thankfully, there are many of them.
As time has passed, reports of this involvement have become more and more elusive.
This could be seen as a direct correlation with advancements within modern communications, the birth of the internet, along with many other modern forms of learning.
Subsequently aiding in the distribution of said information, growing awareness of these reports exponentially.
However, as a result, more in-depth and heightened understandings of evolution theory, and the protection thereof, becomes more developed, and entwined with such institutions.
Profiteers from these lies become guardians of secrets which could destroy their status, clearly lending to the possibility, and motive for a cover up.
Although reports which hit the internet in 2014, claimed a freedom of information act had revealed that the Smithsonian had covered up the remains of thousands of giants, was eventually debunked.
The flurry of attention it has created surrounding the topic, an allegation which we personally know to be accurate, has aided tremendously in the search for the truth surrounding these accusations.
A source we highly recommend, is a book by Richard J. Dewhurst.
Titled, “The Ancient Giants Who Ruled America, The Missing Skeletons and the Great Smithsonian Cover-Up.”
It can not only be seen as a go to resource for evidence of a race of ancient giants, but it also details the thousands of giant skeletons that have been found, particularly within the Mississippi Valley, as well as within the ruins of the giant cities over the past few centuries.

It reveals that not only was North America once ruled by an advanced race of giants, but also that the Smithsonian has been actively suppressing this physical evidence for nearly 150 years.

Dewhurst shows how this suppression began shortly after the Civil War and transformed into an outright cover-up.
This being due to Major John Wesley Powell, who was appointed Smithsonian director, a strict pro-evolutionist.
And finally, the 1920s’ discovery on Catalina Island, a megalithic burial complex with 6,000 years of continuous burials, involving over 4,000 giant skeletons, including a succession of kings and queens, some more than 9 feet tall.
The evidence for which, he claims, and with good reason, is hidden in the restricted-access evidence rooms, at the Smithsonian.

OUT OF MIND » CONSPIRACY THEORIES & ENDURING MYSTERIES » HISTORIES MYSTERIES » What Is The Smithsonian Hiding?