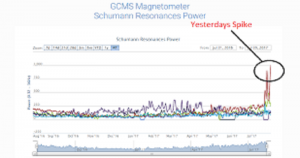 There has been a spike in the power of the earth’s geomagnetic field affecting the schumann’s resonance: reaching a 15 month high.


According to a real time graph from Heart Math there has been a spike in the earth’s geomagnetic field, the data only goes back 1 year, but I managed to find data going back to April 2016, meaning it could actually go back further than 15 months.
The Spike
The spike was recorded by the Global Coherence Monitoring System from the Heart Math institute:
The Global Coherence Monitoring System has been in operation since 2015 and uses state-of-the-art sensing technology to detect changes in the earth’s magnetic field. They have 6 systems based in

Going back for the 15 months I have data for the there have been Schumann Resonances Power lows of 15 and highs of around 360. With the field for the most part sitting between 80 and 200 dependant on the location. In the last 10 days it reached a high of 538.83 in Alberta, Canada and then continued to fluctuate in the successive days, reaching a peak yesterday of 1006.6. Peaks have also been reached in California, Lithuania and New Zealand over this period.
What Caused The Spike?
It is hard to say for certain what has caused this spike, but the geomagnetic field can be influenced by solar activity, the moon’s rotations and interplanetary activity.
What Is The Geomagnetic Field?
The Earth’s geomagnetic field is the magnetic field surrounding the planet that extends from the Earth’s core to outer space, where it comes into contact with solarwinds which are a stream of charged particles emanating from the Sun’s rays.
The geomagnetic field has 2 poles (north and south) which are different from geographic poles and can shift as much as 55 kilometers every year.
The geomagnetic field is vital for our survival and protects the earth’s atmosphere from otherwise catastrophic solar activity which would destroy the earth’s ozone layer.
Many species of animals detect the Earth’s magnetic field and it is used for navigation when migrating. It has also been shown that cows and deer align themselves to the earth’s magnetic field when grazing.
The Difference Between The Geomagnetic Field And The Schumann Resonance
There has been a lot of confusion in recent times (myself being included in this confusion) with the Geomagnetic activity and that of the Schumann’s resonance. The Schumann’s resonance does not fluctuate much, but has 8 different frequencies ranging from 0.5Hz to 45Hz. However the geomagnetic field does fluctuate, this video from Rajie Kablie and Rollin Mccraty of HeartMath clears up some of the misconceptions:


What Does This Flare Mean?

The flare is an indication of recent strong solar activity; a recent study called Synchronization of Human Autonomic Nervous System Rhythms with Geomagnetic Activity in Human Subjects showed
“Human regulatory systems are designed to adapt to daily and seasonal climatic and geomagnetic variations; however, sharp changes in solar and geomagnetic activity and geomagnetic storms can stress these regulatory systems, resulting in alterations in melatonin/serotonin balance, blood pressure, immune system, reproductive, cardiac, and neurological processes.”
From the heartmath website:
When the earth’s magnetic field environment is disturbed it can cause sleep disturbance, mental confusion, unusual lack of energy or a feeling of being on edge or overwhelmed for no apparent reason.
They are also investigating if changes in the earth’s magnetic fields happen before natural catastrophes such as earthquakes, volcanic eruptions and human initiated events such as- riots, social unrest and terror attacks.
Solar activity has not only had negative affects of society, but has also been associated with collective growth and development such as architectural, artistic and scientific breakthroughs, as well as positive social change.
It has also been hypothesized that there may be a link between both human consciousness and the geomagnetic field: meaning the frequency that we emit, could well affect the geomagnetic field, as much as it affects us.
Relationship To The Heart
From all of our organs, it is the heart that generates the largest electromagnetic rhythm. Creating a field that is approximately 100 times stronger than that of the brain. With the right equipment the heart’s electromagnetic field can be detected several feet from the body.
During quiet magnetic periods, Schumann resonance power (SRP) “appears to play an important role in synchronizing people’s slow wave heart rhythms. The potential importance of these rhythms is currently unknown, but (eventually it) may be important to better understand human health and well-being.”
This is a big moment and only time will tell the affect it has on us collectively, but an understanding of an event can often help you to avert disaster. So stay conscious of your actions! Please share this article!
You can also listen to a harmonic 3 minute clip of the Schumann resonance in the audio here:
I am Luke Miller the author of this article,
I am Luke Miller the author of this article, and creator of Potential For Change. I like to blend psychology and spirituality to help you create more happiness in your life.Grab a copy of my free 33 Page Illustrated eBook- Psychology Meets Spirituality- Secrets To A Supercharged Life You Control Here
By Luke Miller Truth Theory
I am Luke Miller a poet, writer and deep thinker! Everything I do is centred around the rebalance of the power structure to one that is harmonious, loving and benefits humanity in its entirety. We are entering a new age of love and I am here to encourage others to be a part of it! (Rev)olution R(evol)ution R(evolution) Revolut(ion) R(evolve)ut(ion) Read More stories by Luke Miller