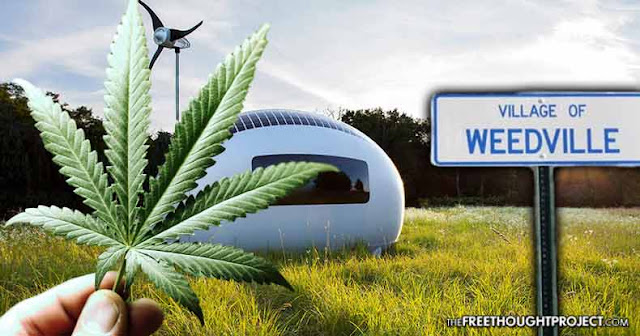 (Matt Agorist) A revolutionary new vision has just been set in motion to create a cannabis friendly town that will be energy independent. Welcome to Weedville.

Related 4 Ways Hemp Can Save the World

In an unprecedented and highly unusual move, American Green Inc., a cannabis grower and product maker, plans on attracting new customers in California — by buying an entire town.

The tiny desert town of Nipton, California was acquired by the company for $5 million. According to the company, they plan on investing an additional $2.5 million in the town to turn it into a pot-friendly tourist destination. Among other smaller buildings, the town includes 120 acres of land, a general store, a hotel, a school, and mineral baths.

According to a report out of Bloomberg:

American Green, based in Tempe, Arizona, will use the existing structures and build new ones — powered by renewable energy — to revitalize the town, said project manager Stephen Shearin. Ideally, the outpost will spawn imitators, he said.

“We thought that showing that there was a viable means of having a cannabis-friendly municipality and further making it energy independent could be a way of really inspiring folks to say, ‘Why can’t we do that here?’” he said.

The move shows how far marijuana has moved out of the shadows despite an uncertain federal policy outlook. With pot now legalized for recreational and medical use in California, Nevada and six other states, one in five American adults can consume the formerly taboo plant as they please. That’s created an opportunity for companies to try to make cannabis a more mainstream product.

The notion of pot growers and the cannabis industry helping the environment and creating and fostering sustainable products is nothing new. However, the idea of turning entire towns into off-grid marijuana-friendly communities is certainly revolutionary.

Pamela Johnston, senior vice president at Electrum Partners, a cannabis industry advising and consulting firm, said restrictions on pot use and availability have limited tourism-related activities, but predicted it will be on par with other types of travel, according to Bloomberg.

However, with legal weed expanding throughout the country, marijuana tourist destinations will likely flourish.

“But before we blink, it will soon outpace other niche affinity travel” like wine, Johnston said.

Unlike, wine, however, cannabis has other uses outside of recreation. Some of the 120 acres of the town’s property could be used to farm hemp which could then be used to create sustainable products like hempcrete and hemp plastics.

Given the amount of petroleum based plastics currently wreaking havoc on the environment, the idea of off-grid, self-sustainable towns popping up to produce environmentally friendly products with no footprint is inspiring, to say the least.

“We are excited to lead the charge for a true green rush,” American Green’s president David Gwyther said in a statement to Time.

“The cannabis revolution that’s going on here in the US has the power to completely revitalize communities in the same way gold did during the 19th Century.”

Nipton — which boasts a population of around 20 people — sits on the edge of California on its Nevada border. It was founded and built during the gold rush.

“The gold rush built this city,” he adds. “The green rush can keep it moving the way people envisioned it years ago.”

However, just like all peaceful and sustainable movements to move off-grid and function outside of the federal government’s grip on society, there is a very real risk of the drug warriors moving in to stomp it out.

Even though Obama promised that the federal government would stop the crackdown on states with legal pot, it still happened. Now, with Jeff Sessions, tyrant extraordinaire, as the Attorney General, things appear to be even more bleak, as this insane pot nazi is attempting to blow new air into the already dead and deflated war on drugs.

However, American Green is not going to take it lying down and plans to move forward while hoping for the best.

As the Free Thought Project reported today, Americans are on their side and Jeff Sessions is a dinosaur. A paradigm shift, according to a new Harvard-Harris Poll, is taking place in the country. For the first time, 86 percent of Americans approve of some form of legal cannabis.

Soon enough — as long as good people continue to break bad laws — we could be making that weekend drive to Weedville in our cars made out of cannabis.

Matt Agorist is an honorably discharged veteran of the USMC and former intelligence operator directly tasked by the NSA. This prior experience gives him unique insight into the world of government corruption and the American police state. Agorist has been an independent journalist for over a decade and has been featured on mainstream networks around the world. Agorist is also the Editor at Large at the Free Thought Project. Follow @MattAgorist on Twitter, Steemit, and now on Facebook.