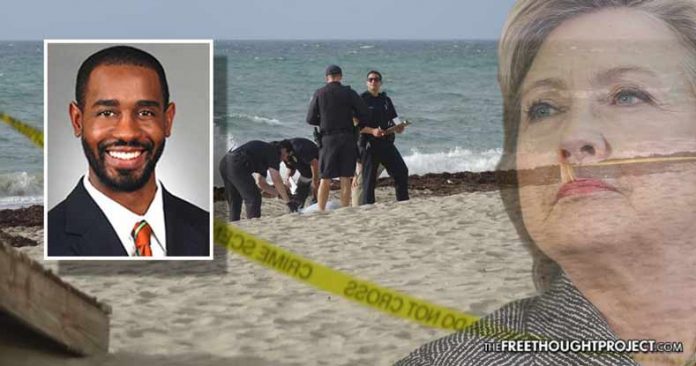 Possibly 2017’s biggest story is the lawsuit Bernie Sanders’ supporters have brought against the Democratic National Committee (DNC) alleging the DNC committed fraud when it favored Clinton over Sanders in the primaries.
Arguably, however, most Americans have never heard about the DNC voter fraud, mainly because the mainstream media is camped out on the alleged collusion between Trump’s campaign and Russia. Shrouded in mystery, one of the DNC lawsuit’s most jaw-dropping events occurred May 24, when the body of U.S. District Attorney Beranton J. Whisenant, Jr. was found on a Hollywood, Florida beach.
When his body was originally found, police announced they were investigating Whisenant’s death from a head wound as a homicide, but detectives and the medical examiner reported this week that the married father of three “had shot himself in the head,” according to The Sun Sentinel.
Jared Beck, husband of Elizabeth Beck (principal lawyers in the lawsuit and founders of JamPac, the group suing the DNC and Wasserman-Schultz), also made a bombshell admission in June, noting that he feared for his life due to the suspicious nature of all the deaths surrounding those working on exposing the DNC fraud. Whisenant was one to the people mentioned by Beck.
In a Facebook livestream, Beck issued the following statement:

After much consideration and deliberation, we have concluded that it is time to bring these concerns to the court’s attention. As such, today we filed a motion asking judge William Zloch to issue an order providing protection of the plaintiffs, their counsel and their families, as well as all potential witnesses in the DNC Fraud lawsuit. In support of this motion, we have cited the following events: the untimely death of our process server Shawn Lucas, the unsolved murder of DNC employee Seth Rich. We believe Mr. Rich might have been a potential witness in this case. We’ve also cited the recent untimely death of federal prosecutor Beranton Whisenant of South Florida. Also recent bizarre and disturbing conduct including threats that has been directed at plaintiffs their counsel and employees, and we’ve also cited an offer to provide security by the Oathkeepers and it’s president Stuart Rose.

Now, investigators have concluded their investigation into Whisenant’s death and they’ve ruled it a suicide. Whisenant’s body was found shortly before 6:30 pm on the 24th of May by a random stranger. At the time, police were trying to determine if his death was a suicide, homicide, or something else. All that has changed now with the department ruling Whisenant’s death a suicide, but in doing so, an even greater mystery has emerged. Police did not find a gun.