Americans are Rapidly Descending Into Madness 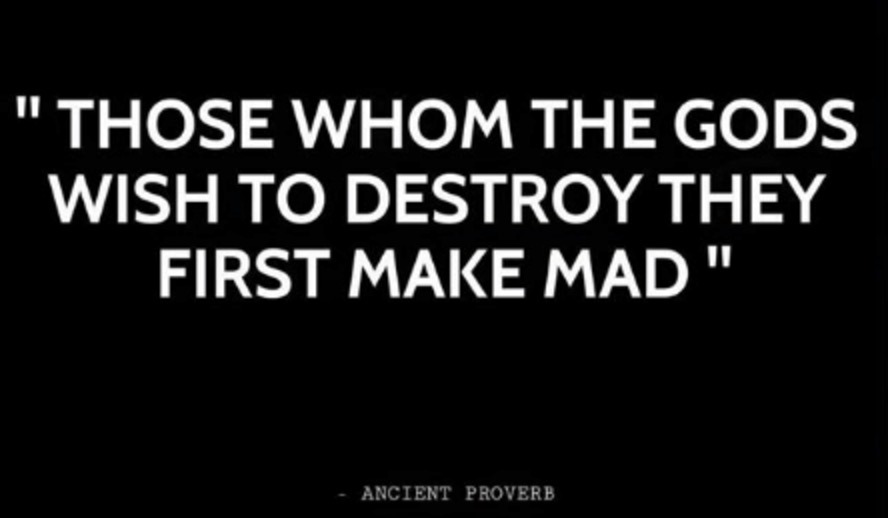 I don’t live in an echo chamber, partly because there aren’t enough people out there who think like me, but also because I constantly and intentionally attempt to challenge my worldview by reading stuff from all over the political map. I ingest as much as I can from a wide variety of intelligent sources, picking and choosing what makes sense to me, and then synthesizing it the best I can.
Though I’m certainly grounded in certain key principles, my perspective on specific issues remains malleable as I take in additional information and perspectives. I try to accept and acknowledge my own ignorance and view life as a journey of constant mental, emotionally and spiritual growth. If I’m not growing my capacity in all of those realms until the day I die, I’m doing it wrong. Life should be seen as a battle against one’s own ignorance, as opposed to an obsession with the ignorance of others. You can’t legislate morality, nor can you legislate wisdom. The only way the world will improve on a long-term sustainable basis is if more of us get wise. That’s a personal journey and it’s our individual duty to accept it.
While I’m only in control of my own behavior, this doesn’t mean that the behavior of others is irrelevant to my life. Unfortunately, what I see happening to the population of America right now seems very troublesome and foreboding. What I’m witnessing across the board is hordes of people increasingly separating themselves into weird, unthinking cults. Something appears to have snapped in our collective consciousness, and many individuals I used to respect (on both sides of the political spectrum) are becoming disturbingly polarized and hysterical. People are rapidly morphing into radicalized mental patients.
What’s worse, this environment is providing a backdrop for the most destructive people of my lifetime — neoconservatives and neo liberals — to preen around on corporate media as “the voices of reason.” This is one of the most perverse and dangerous side-effects of the current political climate. As I noted earlier today on Twitter:

If in your disgust with Trump, you’re willing to run into the cold embrace of these destroyers of the middle class and the Middle East, you’ll get what you deserve. In contrast, if we really want to deal with our very real and very systemic problems, the last thing we need is a population-level mental breakdown that leads to a longing for the criminally destructive political status quo, yet that’s exactly what seems to be happening.
Ok fine, so everything seems to be rapidly collapsing, but what are we supposed to do? First of all, don’t lose your minds.
As I suggested in February’s post, Why Increased Consciousness is the Only Path Forward:

As noted earlier, Wilber thinks 10% is a key tipping point. In other words, if we can get 10% of the population to center around a yellow second-tier level of thought, which consists of a momentous leap in consciousness, the entire world will change for the better. I agree. I’m not here trying to sell you a seminar on how to expand your consciousness; rather, I think these article can help spark some sort of revelation in the minds of many of you who are already at yellow, or at least at the cusp of such a transformation. Since consciousness can and does regress under conditions of stress and fear, it’s extremely important to be conscious of your consciousness so that you don’t fall back into lower states.
Unfortunately, I see many people regressing at the moment, and I see the media as an intentional force in trying to get people to lower their consciousness. A perfect way to tell if someone is operating at a low level of consciousness is if they’re constantly placing tens of millions of their fellow citizens into an outside group they subsequently demonize. It’s perfectly fine and healthy to harshly criticize the system itself and the many powerful individuals doing awful things within it, but once you start dehumanizing large swaths of the population as a matter of your worldview, you are most certainly on a very counterproductive path that will lead to merely a blackhole of nothingness for society.

Beyond maintaining one’s sanity, it’s imperative that conscious humans create systems and communities that have as little connection as possible to the existing and rapidly disintegrating paradigm. This will create “anti-fragile” units of strength within the collapsing Potemkin village socio-economic structure that dominates our culture right now. Some of these projects need to be local, while others can be global. Community farming/food production is a great example of a local initiative, while Bitcoin (and cryptocurrencies in general), represent global initiatives to replace the hopelessly corrupt and archaic entrenched financial system. While crazy, power-obsessed tribes focus on taking over the hopelessly corrupt centralized government in Washington D.C., we need to continue to build separate, decentralized paradigms — and there isn’t much time to waste.
Fortunately, there are plenty of very decent, very conscious people out there. I want this piece to provide encouragement to those of you already engaged in this invaluable work, as well as inspiration for those of you looking for an outlet for your creative and intellectual energies. It’s never been more important to keep our heads steady and not permit ourselves to be sucked into the mental sickness infecting so many of our fellow humans. It’s imperative that we vigilantly guard our wisdom and consciousness, because the best solutions will only come from a place of spiritual and mental health. If you descend into the gutter with everyone else, your output will also end up looking like trash. That’s the last thing we need.
Stay strong and stay conscious.
If you liked this article and enjoy my work, consider becoming a monthly Patron, or visit our Support Page to show your appreciation for independent content creators.
In Liberty,
Michael Krieger

Posts : 486
Join date : 2017-05-11
"Libertyblitzkrieg?"
Really? While trying to defend tRump?
Come on. I'm sorry you bought into the contrarian, "big government" is corrupt, he will save us trap, but he is a joke. No amount of moral relativism will excuse support for him. You were fooled. Get over it. He didn't end the Fed. He didn't end pedophilia. He didn't drain the swamp. He is a liar. He is a racist. He is a sexual predator. Call everyone who knew this "mad." We are. Mad that conspiracy theory drove many people to think this clown is anything but what he is, a greedy, selfish, man-child.