The Fake Eclipse Hoax: Another Psyop? 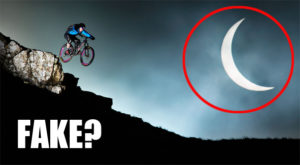 Now that a number of people have had the time to analyze the “eclipse”, it seems the event was not what it seemed.
Several say it WAS not and COULD not have been our moon that eclipsed the sun.
Our artificial construct appears to have delivered an artificial eclipse according to the math, home demonstrations, video evidence, etc.  And many have asked why the path of totality went from West to East, and why at that angle across the United States. We’ve shared videos about just what the path would entail from a mystic, occult perspective of the satan-worshippers. Do we really believe that’s a coincidence?
Some inquiring minds are even linking the inconsistencies to the Flat Earth theory, so that has not yet been put to bed either. Some think it was about Project Blue Beam. Some use terms like parabolic mirror, simulation, anomaly.
If we are at all observant, there must be things we have noticed that just aren’t right, and folks are talking about it and throwing their ideas out there.
I know that the faint “shadow” or dimming of the sun we experienced here in Arizona was the same dimming I noticed earlier this summer when there was no apparent reason for it. Something very odd is going on with the sun, the moon, etc., and when I walk out the door at 6 am at 85 degrees and smell rain and intense humidity in the desert when we haven’t had a drop of moisture for months—something is off. Where is that hot, baked smell I’ve grown so fond of that vanished overnight?
A couple of folks have reported they saw odd rays of light in their sky recently emanating from a mystery light source, like someone has been shining a flashlight into our little terra-rium, checking in on the science project. They need to replace that sun that isn’t working so well. When is the real one going nova?
If you’re at all inquisitive and have the time, you may want to take in a few of these videos. Some are technical, some mathematical, some photographic, some musings from the heart.
The emotions we get from these videos range widely. Some folks are disgusted, some intrigued, frustrated, angry, most are bemused. These media offerings aren’t slick, cointelpro productions. They’re from real Truthers who want us to know what they’ve seen and questioned. They’re just not buyin’ it.
Some are longer videos, some are short, but they DO provide many intriguing thoughts and postulations.
Thanks to L for the first one. I’ve watched a few others and listened to the longer audio from Sherry Shriner until I fell asleep late last night.
The nasty things the fear mongerers said would happen didn’t, of course—the psychopaths love to wind us up—but SOMETHING happened, and we’re not privy to that information yet. The dark was clearly planning something big, but their pathetic little scheme was thwarted.
I’d like to know what the hell was up with NASA using brainwashed university students to launch bacteria-filled balloons within the path of totality during the “eclipse”. I doubt it had ANYTHING to do with Mars, or Mercury, or any other research. Why did they need images of the “eclipse” on Earth from near space? Can’t they get those from the fancy plane they have up there which they included in the official NASA news feed during the event?
It’s just too hokey for words. NASA is a self-serving, rogue agency and never tells the truth about anything of real import to Humanity but they have no problem using taxpayer dollars to fund their “research” projects. 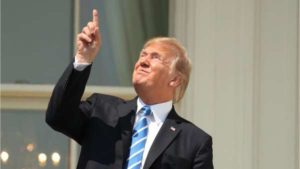 Also, why did President Trump look at the sun during the eclipse without the glasses? Did he know something we didn’t? That it was a hoax, perhaps?
What would have been really cool would have been a full-on Project Blue Beam alien display and with everyone wearing eclipse glasses that were actually 3-D glasses. Now that would have been an event to remember, but of course we can’t have the general public exposed to anything that will make ETs seem scary. That will not do.
Whatever it was that went down on August 21st, it was utilized by both the Light and the dark to achieve their objectives. I think the Light won, but it will no doubt remain a “coverup” until someone decides we can handle it.  ~ BP