NASA Satellite captured mysterious Black Planet ‘Rahu’ in the darkness behind the Sun?

NASA Satellite captured mysterious Black Planet ‘Rahu’ in the darkness behind the Sun? Fri Aug 25, 2017 9:50 am

NASA Satellite captured mysterious Black Planet ‘Rahu’ in the darkness behind the Sun?

What is going on with the SOHO LASCO C3 satellite? Images captured on August 23, 2017 show at one point complete darkness behind the Sun what looks like a giant planet in the dark that disappears immediately. 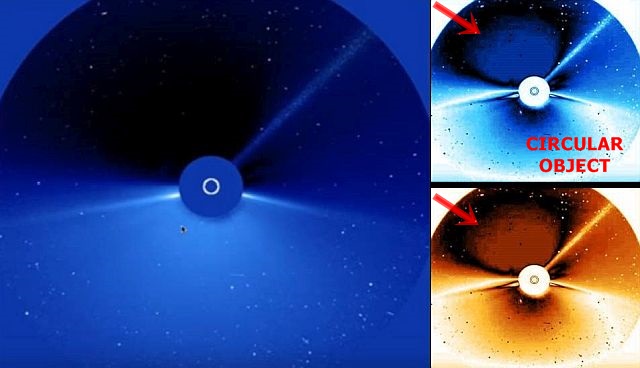 Could it be the black sun ‘Rahu’? According to ancient myths ‘Rahu’ is the third celestial body that eclipses the sun and the moon.

Ancient civilizations knew what this phenomenon was by observing the stars but in modern times it is said by some people that it has been kept secret by the governments.

According to Vedic Astronomy, the most ancient and accurate system of astronomy on the planet, ‘Rahu’ is one of the navagrahas (nine planets) and solar eclipses are not caused by the moon coming in front of the sun as astronomers believe, rather at the time of a solar eclipse the dark planet ‘Rahu’ comes between the sun and the earth.

Whether the black planet ‘Rahu’ described in Vedic astronomy and in Hindu tradition, as a dark circle that swallows the sun causing eclipses, is a myth or not, the mysterious circular object in the dark behind the sun, captured two days after the total solar eclipse over America, certainly gives rise to the ancient myth.