by Cassius Methyl; The Mind Unleashed

The two galaxies closest to our Milky Way galaxy are called the Large and Small Magellanic Clouds. They are irregular dwarf galaxies both orbiting ours, actually set to eventually be swallowed by the Milky Way.

This is a picture of the two galaxies: 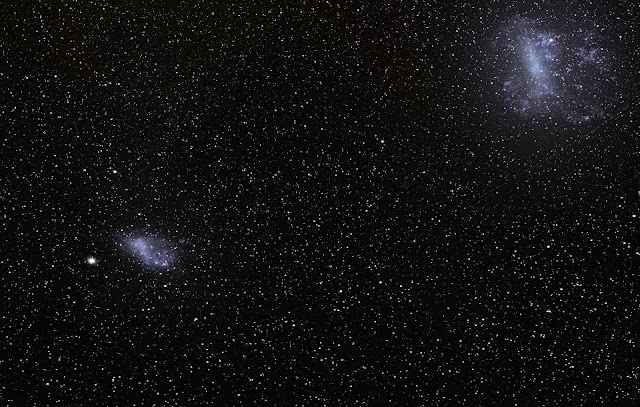 (Image credit: Wiki)
For the first time, astronomers have concluded that the bridge connecting these two dwarf galaxies is magnetic. The Magellanic Bridge was discovered in 1963, but now more is apparently known about magnetism between gigantic structures in the universe.

The discovery could provide insight into how the universe is full of magnetism and electric energy of various kinds. Despite unimaginably long distances, galaxies are now known to interact magnetically.

Jane Kaczmarek, a student at the University of Sydney made a measurement of the hydrogen bridge between the 2 dwarf galaxies, calculating a “magnetic field strength of 0.3 x10-6 Gauss.” How this calculation can be confirmed as accurate, I’m not sure.

“It’s only recently that we have become able to detect a field this weak. This is the first time [an astronomical] field has been detected not through magnetization’s effect on its own light.

We think the magnetic fields get pulled out of the clouds as well, this changes the alignment of the field, but the field itself stays.”

The calculation was published in Monthly Notices of Royal Astronomical Society.

According to Sky and Telescope, Australia is a place like no other to observe the phenomena because of its position in the Southern Hemisphere:

“For stargazers in the Northern Hemisphere, it’s easy to forget that the Milky Way is actively consuming two dwarf galaxies. Those in the Southern Hemisphere have a front row seat to watch our galaxy wreak havoc on the Large and Small Magellanic Clouds (LMC and SMC).

Now, for the first time, researchers using the Australia Telescope Compact Array radio telescope in New South Wales, Australia, have detected a magnetic field in the space between the Magellanic Clouds. Called the Magellanic Bridge, this structure is a 75,000 light-year long filament of gas and dust that stretches from the LMC to the SMC.”

In the 1950’s, our Milky Way galaxy was found to have a magnetic field, affecting solar systems and dust within certain regions. Eventually, the concept of a galaxy having a magnetic field became common.

It is believed that most galaxies have magnetic fields, and even more strange, clusters of galaxies share magnetic energy in ways that we don’t understand at all. Galaxies that are an incomprehensible distance apart can share magnetism.

I recommend a look at Thunderbolts.info and theories re the electric universe. Magnetic fields are indicative of electric current. These theories are not new. They are gaining support among scientists from many disciplines. Watch some of the conference videos. The idea that predictions can be made based on observation should be remembered as a pillar of the scientific method. Why are so many mainstream astronomers and astrophysicists constantly "surprised" and "baffled" by new information their instruments and probes report? Perhaps their models are wrong. Maybe CERN is a $13 billion boondoggle!
I'm an electronic engineer, not a scientist. I just find it fascinating. I've read books about physics and Einstein and Richard Feynman and followed along as best I can. The EU stuff is much more understandable. It scales from sub-atomic to galactic and beyond. I endorse it.

Admin
Posts : 100227
Join date : 2012-01-04
Location : Woodstock Nation
Welcome Roger! Thanks for joining and commenting. I love Thunderbolts Project! Thanks for the reminder.
It is very fascinating for sure! Especially the CERN info. My son is also an electronic engineer as is one of my son in laws. He is working with 3D printing now. Pretty cool.