Incredible footage captures the ground “Breathing” in Mexico after the earthquake

A road in Mexico appears to be ‘breathing’ after a 7.1 magnitude earthquake devastated the country on Tuesday!

The cracked road moves up and down as if someone from the ‘inside’ is breathing.

People were running down the road, but were fascinated enough to stop and film the moving road.

Locals from Morelos, Mexico gathered to watch the phenomenon. Many had second thoughts to cross it over, but some vehicles and pedestrians made their way across the damaged breathing tarmac. 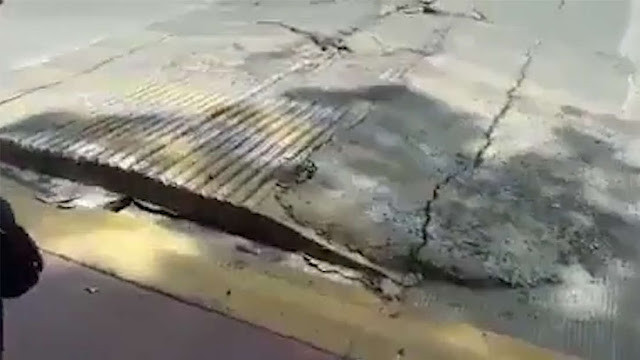 Earthquakes shake the ground, moving rocks, stones and earth which can sometimes create holes beneath a seemingly solid surface which can then fill with air or water.

The video immediately went viral online, and it triggered online conversations, with many people commenting what could’ve caused this phenomenon.

Scott Lenharth wrote: ‘They had something similar during the Japan earthquake in a park which caused soil liquefaction where water is squeezed out the cracks.’

Vickie Flores wrote: ‘I think that may be the ocean underneath the road. Be careful as it could collapse and become a very large sink hole!’

And Craig Valentine wrote: ‘It’s the tree swaying away from the crack and it’s roots lifting the road surface.’

Natural disasters, such as earthquakes can sometimes expose some weird and wonderful geological effects.

Check out the video bellow to see what the ‘breathing’ really was: