Photographs of catastrophes wrought by nature never truly encapsulate the despair and desperation of the people directly affected, but images of utterly depredated Puerto Rico in the wake of monster Hurricane Maria rawly depict an island in pieces — almost certainly years from substantial recovery — imploring the world for compassionate assistance.
Maria has now weakened significantly into a tropical storm, positioned off the Eastern seaboard around the Carolinas with winds sustained around 55 m.p.h., and is expected even now to erode fully 60 percent of North Carolina’s storied coastal sand dunes — damaging, or detrimental to the landscape — but a far cry from the tempest’s brute 155 m.p.h. winds sustained during its Category 4 landfall in Puerto Rico on September 20.
With little time to prepare, Dominica and Puerto Rico bore the brunt of Maria’s wrath — the latter, losing power to the entire island — causing a near instantaneous crisis for residents suddenly without clean water or electricity for basic needs. Indeed, TIME Magazine notes, Puerto Rico Electric Power Authority (PREPA) “was still working on restoring power to about 60,000 residents following Hurricane Irma” when Maria struck.

NOAA/NASA satellite image of Puerto Rico with power in August, prior to Hurricane Maria.

NOAA/NASA satellite image of Puerto Rico almost entirely without power after the hurricane made landfall.
Hospitals predict patients will begin dying forthwith should ample medical supplies — such as refrigeration-dependent insulin, dialysis needs, oxygen, blood, and much more — not arrive immediately.

Hospitals are in the grave position of running out of vital and life-sustaining medical supplies. (Image: Carolyn Cole/ L.A. Times)

Images of Puerto Ricans standing in hours-long lines to fill small containers with fuel, laboriously sorting through rubble of destroyed structures, gathered with arms extended around the few functioning cell towers, clamoring for scanty food and water rations distributed by officials, or simply sitting in the streets surrounded by almost nothing recognizable, reveal Americans tested to the limit — and months ahead where that limit will be tested.

A decimated grocery store in Guayama evinces the need for food and emergency supplies to reach the island. (Image: Carlos Garcia Rawlins/Reuters) 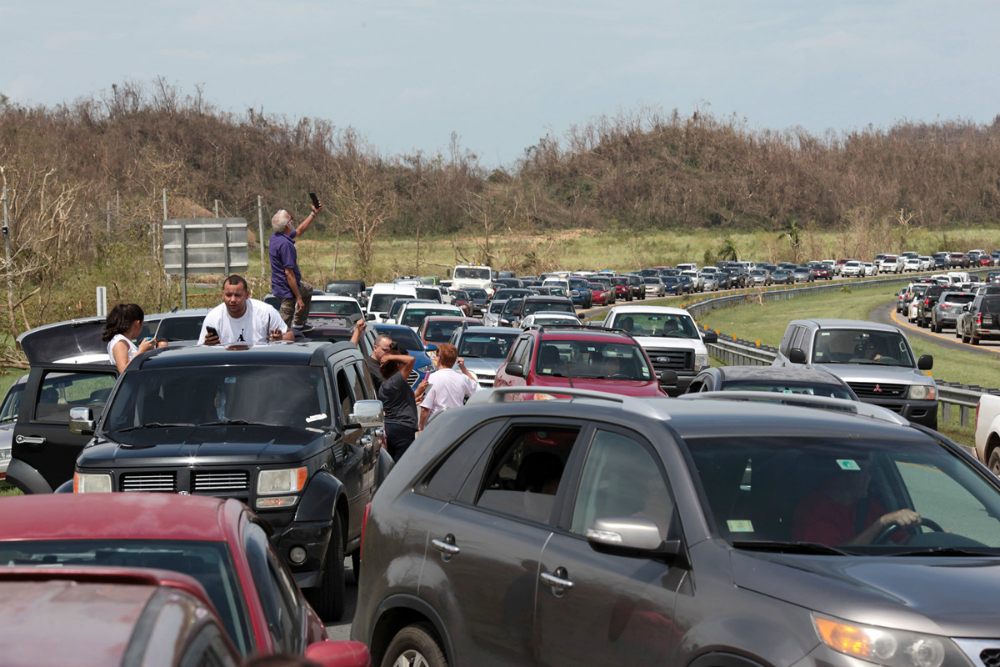 A road serves as a parking lot as people flock to a working cell tower for communication. (Image: Alvin Baez/Reuters)
“Most of the U.S. territory currently has no electricity or running water,” The Atlantic, which published a photo essay of the destruction, reports, “fewer than 250 of the island’s 1,600 cellphone towers are operational, and damaged ports, roads, and airports are slowing the arrival and transport of aid. Communication has been severely limited and some remote towns are only now being contacted. Jenniffer Gonzalez, the Resident Commissioner of Puerto Rico, told the Associated Press that Hurricane Maria has set the island back decades.” 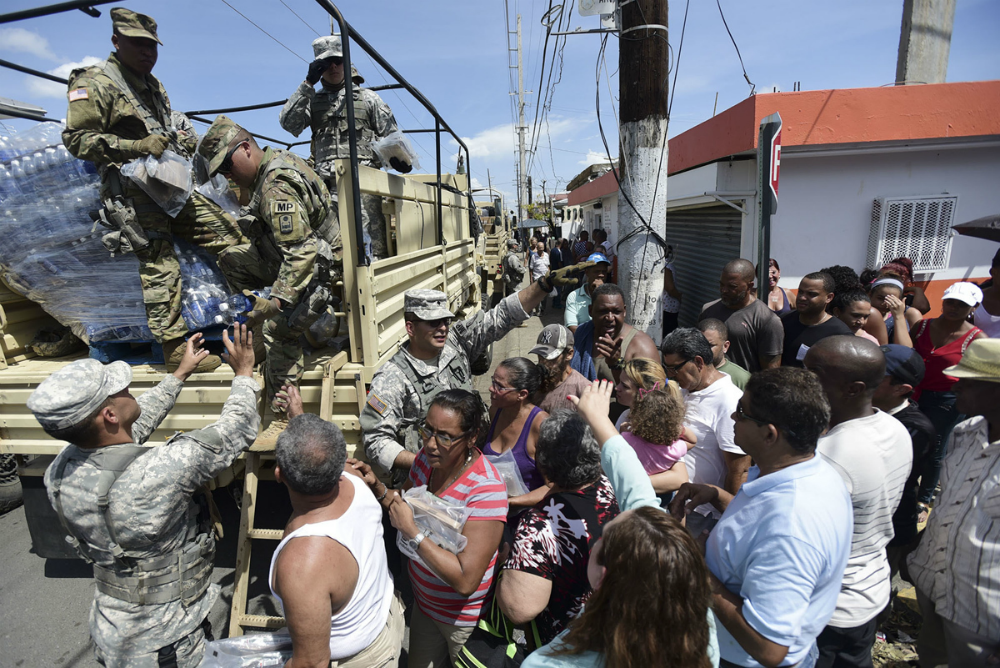 At Barrio Obrero in Santurce, the National Guard distributes water and food to hurricane victims who would have no other way to procure it. (Image: Carlos Giusti/Associated Press)

Water is collected from a natural spring — one of several created after landslides sent earth tumbling down hillsides — in Corozal. (Image: Ricardo Arduengo/AFP/Getty Images)

Trees tangled with debris must be extricated by chainsaw, in Yabucoa. (Image: Carlos Garcia Rawlins/Reuters) 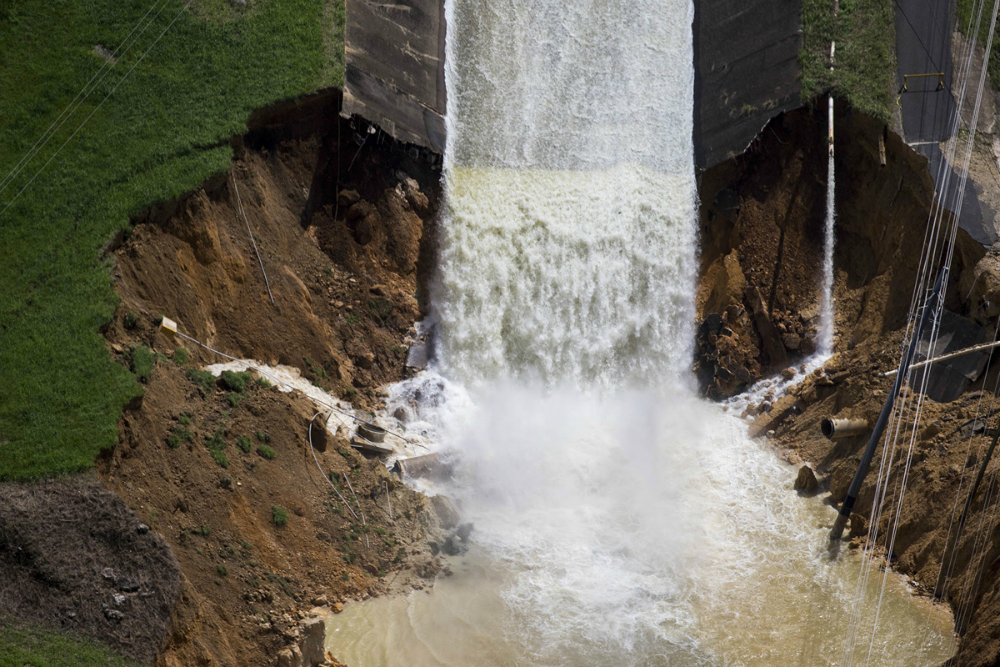 Guajataca Dam in Quebradillas began to fail on September 23, forcing officials to rush the evacuation of thousands. (Image: Associated Press) 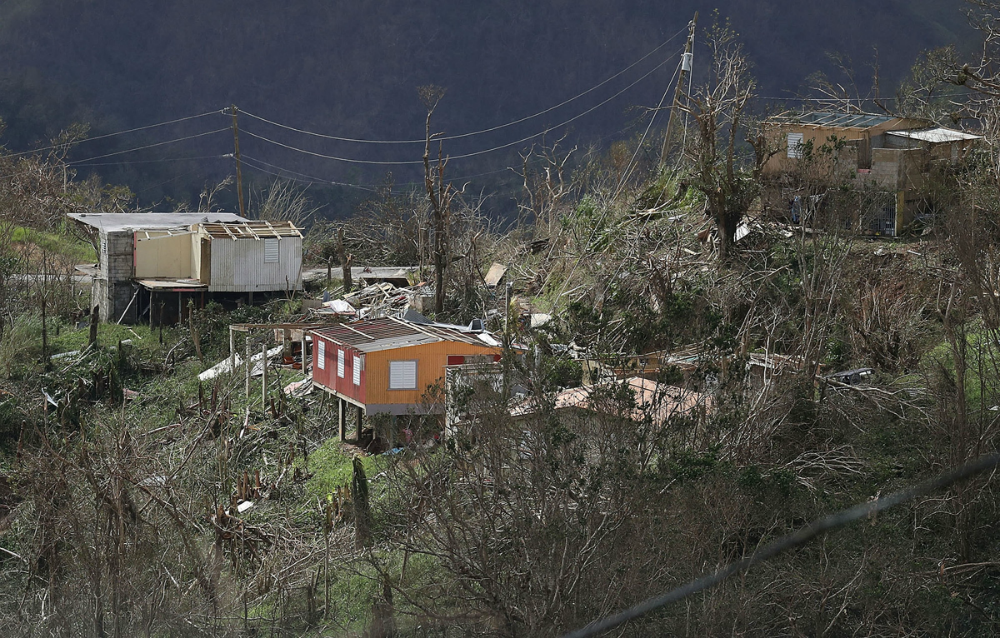 Myriad homes like these in Progreso Barrio Pulguillas have been all-but flattened, losing roofs, walls, windows, and some, plummeting to the valley in landslides. (Image: Joe Raedle/Getty)

Debris from a house in Corozal surrounds the crippled structure. (Image: Ricardo Arduengo/AFP/Getty)

In Toa Baja, a family sorts through the rubble of their wholly destroyed home. (Image: Ricardo Arduengo/AFP/Getty)