OUT OF MIND » THE INSANITY OF REALITY » JULIAN ASSANGE & WIKILEAKS & » Assange Warns About Vegas Shooting: ‘Almost All Terror Plots are Created by the FBI’

Assange Warns About Vegas Shooting: ‘Almost All Terror Plots are Created by the FBI’


Julian Assange noted that the FBI's business model is to stage terror plots so they can swoop in and save the day by foiling the plot they created. 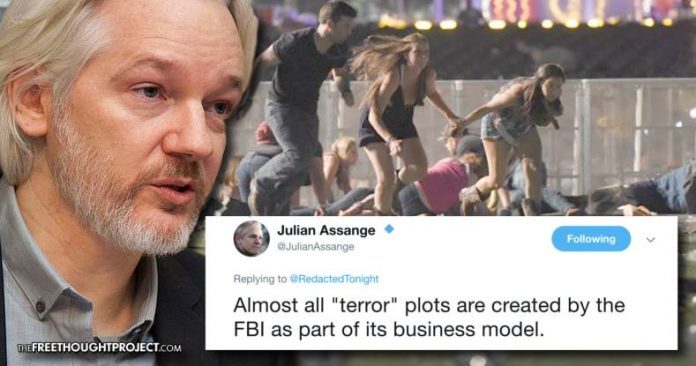 WikiLeaks founder Julian Assange weighed in on last Sunday night’s deadly mass shooting in Las Vegas, and he pointed out that the FBI has a sordid history of targeting mentally ill and emotionally unstable individuals.

“Almost all ‘terror’ plots are created by the FBI as part of its business model,” Assange wrote.

Arguably one of the world’s most respected journalists, whom members of the federal government want to label a spy, Assange linked his comments to a Business Insider story written by Caroline Simone titled, “The FBI is ‘manufacturing terrorism cases’ on a greater scale than ever before.” Simone wrote an echo piece from the New York Times which indicated that 67% of terrorism criminal cases also involved evidence provided by undercover FBI agents.

Advertisment
Sami Osmakac is one such poor and emotionally unstable individual, also referenced in Assange’s tweet, who the FBI groomed to be one of their nabbed terrorists. Democracy Now covered the Osmakac case and provided a synopsis:


“How the FBI Created a Terrorist.” That’s the subtitle of a new exposé in The Intercept by Trevor Aaronson, a journalist who investigates the FBI’s use of informants in sting operations. The article tells the story of Sami Osmakac, a mentally disturbed, financially unstable young man who was targeted by an elaborately orchestrated FBI sting in early 2012. The operation involved a paid informant who hired Osmakac for a job, when he was too broke to afford inert government weapons. The FBI provided the weapons seen in a so-called martyrdom video Osmakac filmed before he planned to deliver what he believed was a car bomb to a bar in Tampa, Florida. His family believes Osmakac never would have initiated such a plot without the FBI.


The F.B.I. has significantly increased its use of stings in terrorism cases, employing agents and informants to pose as jihadists, bomb makers, gun dealers or online “friends” in hundreds of investigations into Americans suspected of supporting the Islamic State, records and interviews show.

Unfortunately, the list of individuals the FBI has entrapped, as some have charged, also includes dozens of individuals who are either mentally ill or emotionally unstable.


“They’re manufacturing terrorism cases,” said Michael German, a former undercover agent with the F.B.I. who researches national security law at New York University’s Brennan Center for Justice. In many of the recent prosecutions, he said, “these people are five steps away from being a danger to the United States.

Critics such as Michael German should know, he used to work for the FBI as an undercover agent. German charges that if left alone, those so-called terrorists would likely not hurt anyone. However, the FBI disagrees. They contend if they wait around and do nothing, those individuals with terrorist leanings will act on their plans and impulses.


READ MORE:  BREAKING: Congressman Says Assange Could be Pardoned for Proof Russia Did Not Hack DNC


Ironically enough, Fox News’ Judge Napolitano agrees. He addressed the FBI’s controversial practice of latching on to emotionally unstable individuals, befriending them, giving them a terror plot to conduct, empowering them to conduct it, and giving them the final pushes needed to carry out those terror plots. Here’s the segment below:

Napolitano accurately reported that all of the attempted terror plots the FBI has interrupted, were, in his words, “created by the Feds.” In other words, they manufacture a terror plot, locate a willing participant to be characterized as the bad guy “terrorist,” and then foil the plot just as it is about to be carried out.

Do you remember the “shoe bomber,” the “underwear bomber” and the “Times Square bomber“? The individuals at the heart of those foiled terror plots were, in Napolitano’s words “bumbling fools,” or bad actors in the FBI’s planned foiled terrorist operations, but who were stopped concerned citizens—not the FBI.

But Napolitano calls the “more curious cases,” the ones who the FBI groomed, empowered and unsurprisingly nabbed just before they carried out their attacks. The judge charges the FBI “befriended, cajoled, and persuaded them” to attack Americans. Doesn’t that make them a State-sponsor of terrorism, albeit foiled terrorism?

Unfortunately, there is inherent risk involved with arming potential terrorists for a FBI-sponsored terror sting. Sometimes those plots don’t go as plan and there is always a potential for the bad actor to actually be successful with going through with the terrorist attack.


It is still too early to know if Paddock was one such bad actor in an FBI terror sting operation gone bad. According to the lead FBI agent in the “1-October” case, Aaron Rouse, the FBI is tracking down every lead both in the U.S. and overseas, and if people want to report any information, they should contact the FBI directly.

Taken together, Assange’s tweet, combined with the accurate reporting of left-leaning New York Times and right-leaning Fox News, a vivid picture emerges. The left, the right, and the independent are all becoming aware of just how dangerous the FBI’s anti-terrorism stings can be, especially if Paddock’s murderous rampage is revealed to be the work of an FBI sting operation gone bad.

Bad actors are needed, after all, to continue the endless War on Terror, and they are useful in creating revenue for the FBI, Assange contended. He wrote that they are especially needed for “taxes” and represent a “stable” and legitimate “threat.” Assange also added the plot, execute, intercept model the FBI currently uses is their “business model.” Without it, presumably, their business fails.

OUT OF MIND » THE INSANITY OF REALITY » JULIAN ASSANGE & WIKILEAKS & » Assange Warns About Vegas Shooting: ‘Almost All Terror Plots are Created by the FBI’