Testicular cancer may be one of the least-talked about cancers, but it is actually the most common cancer among men. This alone makes it worth conversing about. In the United States, an estimated 161,360 men are diagnosed with prostate cancer each year. While the survival rate is higher than most cancers (the 5-year rate for most men with local or regional cancer of the prostate is 100%; 10-year rate is 98%), there are no guarantees when dealing with the affliction, as the sickness stems from toxicity, acidosis and a backed up lymphatic system. If ignored, the root cause of the disease may manifest into more.
One individual who now knows this to be true is Tom Arguello. Four years ago, the Texas resident lived like the “average” American. He cared less about what he ate, he placed himself in toxic environments, and he rarely exercised. As a result, he suffered from obesity, stage II hypertension, high blood pressure, anxiety, depression and fatty liver disease. Two weeks before his 37th birthday, he learned he had testicular cancer, as well. He said during our interview: “When I was diagnosed, it was like a nuclear bomb went off in my life. Cancer wasn’t real to me up to that point. It was something that happened to other people, not to me. I was numb, dumb and in denial!” 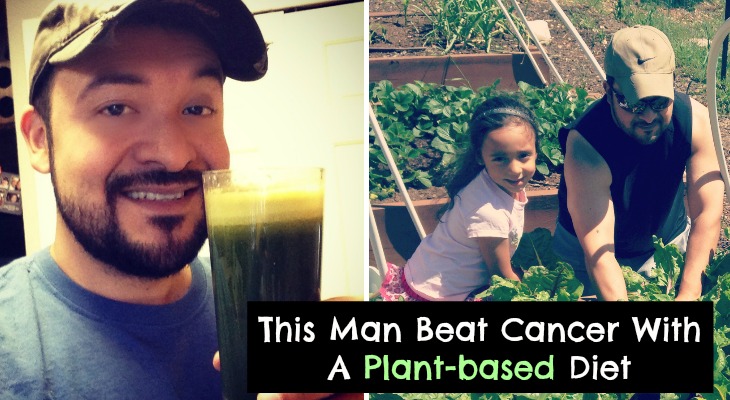 After coming to terms with his diagnosis, he decided to follow his Oncologist’s advice and look into traditional cancer and radiation treatments. After learning that his doctor gave no credence to nutritional therapy, however, he “walked out of his office.” In the interview below, Arguello mentions how he made a joke about eating McDonald’s, and the physician said “it would actually be a good idea.” The reality sunk in when he saw the entire hospital staff gorging on breakfast tacos and donuts. Said Arguello, “It was then that I realized that they couldn’t cure anyone if they were eating the cancer-causing food themselves.”
In the following months, Arguello dove into research of his own, fearful that if he didn’t take action his life would end prematurely. Book after book, he realized that many of his problems stemmed from mankind’s disconnect from nature. He said, “After my decision to treat myself holistically, I devoted every waking hour to researching natural cures.”

Tom with one of his children in the garden.
Credit: Tom Arguello

“I literally did everything imaginable to heal my entire life. The first thing I did was to completely eliminate all fast food, junk food, fake food and anything processed,” said Arguello. “I consumed over a liter of raw, homemade green juice every day without fail and began to eat clean, scratch-made meals. I also drank a ton of alkaline water and low-sugar kombucha along with  several tablespoons of apple cider vinegar per day. Essentially, everything I ate (or drank) was a superfood, but I would specifically cite turmeric and moringa as superfoods that I consumed regularly.” He also began running outside, as there are numerous benefits to obtaining enough vitamin D and oxygenating your cells. It makes “it harder for cancer to thrive,” he said.

Credit: Tom Arguello
The transformation wasn’t just physical. Upon adopting a plant-based diet, a “spiritual awakening” of sorts occurred, and a fondness for true holism was born. “Then I turned inward and worked on healing my mind and spirit. I had never been an overtly religious person and I felt that I needed to have some sort of spiritual practice to expedite my healing. I found meditation and immediately fell in love with it. I also maintained a positive outlook and mindset.”

An important part of the process was understanding that he alone was responsible for creating the cancer. As a result, he chose to give up phrases such as “fight cancer” and “battle cancer,” because he was mentally done being in a war with his body. “Words have power and energy. When you think or say low vibrational thoughts and words, you are essentially working out a negativity muscle. Do you really want that muscle to grow?” said Arguello.
To this day, Arguello continues to follow what he refers to as “The Kitchen Sink Method.” Essentially, if it’s unprocessed, unheated, untreated, and plant-based, he’ll consume it. He wrote via email, “I still make my own vegetable juice every day. That and meditation are non-negotiables for me. When I turned 40 years old, I decided to go 100% plant-based after several small flirtations with it. I have no plans to stop. I aptly nicknamed myself ‘The 40-year-old Vegan’.”


The Inclusion of Cannabis

Part of “The Kitchen Sink Method” was including CBD oil when he made trips to Colorado. He wrote,

“My experience with cannabis oil was extremely positive. I was amazed to learn about how we are essentially wired to consume this plant, and that knowledge just furthered my belief that we have a symbiotic relationship with nature. Not only did I feel better, but I thought better and clearer. I remain an ardent supporter of medical marijuana and long for the day that it is legalized nationally.”

When asked if he has advice for others who might be suffering from cancer, Arguello responded: “I would say that even though it feels like the walls are caving in and it seems as if all hope is lost, it’s not. Cancer is a messenger. It’s trying to tell you something. Maybe it’s that your diet and lifestyle needs to change. Maybe it’s that there’s another area of your life that needs healing. Whatever it is, be open to the message. Stay positive and don’t give into fear. You cannot heal with negativity. That’s like trying to bite your own teeth, it can’t be done!”

“Don’t “own” cancer. Reduce the amount of time you talk and think about it. Now I’m gonna say something antithetical to that,” he added. “Cancer is going to change you. That is indisputable. The only question is whether that change is for the better or for the worse. That part is solely up to you. Ultimately, cancer will become a part of your story, but not the whole chapter. Your book is far from over!”

Fortunately, Arguello’s experience has rippled out and positively affected others. Not only does his family regularly consume juice and healthy meals, too, his wife introduced scratch-made, unprocessed, organic food at the childcare center she runs. There, a 500 square-foot garden space is teaching children about the importance of healthy eating and connecting with the Earth.

Tom with one of his children, educating on the importance of natural, organic food. Credit: Tom Arguello
His experience also informed him of how broken the American healthcare system is. He said,

“My own health challenges highlighted that not only is our healthcare system broken in this country, but so is our food system. The Standard American Diet is truly sad. It is the single greatest contributor to disease in this country. We are in dire need of a paradigm shift. We need to shift from being consumers of convenience foods to growers of organic foods. What I tell people the most is this: You are the best healthcare provider. No one can ‘provide’ health to you but you. To say that we need to go outside of ourselves for anything is utterly ridiculous. Even animals know how to maintain health on their own, so why don’t we?”

Watch the interview below:

Arguello’s journey is inspiring and motivating for those who seek to better their lives through a healthy diet and a positive mentality. You can learn more by visiting The Green Health Project Facebook and Instagram, as well as the LilyPad Gardens School Facebook and Instagram. Check out his new project, the Talking Shift Podcast.