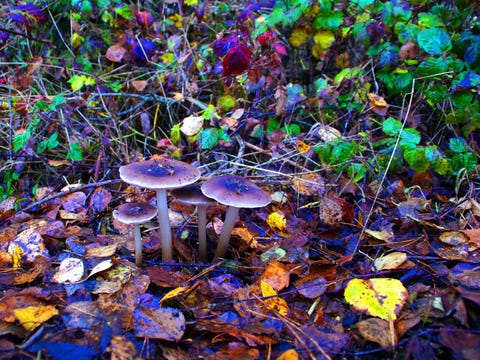 To be sure, of all the recent human trials to come out showing the promises of psilocybin – the hallucinogenic compound found in magic mushrooms – it’s only the scientists who are surprised by the stunning brain changes from psychedelics. (Then again, behold the results for yourself.)
That’s what happened when Robin Carhart-Harris of Imperial College London and his colleagues announced the good news today with their newly published study in Scientific Reports. They ran 19 depressed and treatment-resistant volunteers through a magic mushroom trial to look at the results in their brains. Previously, Carhart-Harris and his team ran 12 people through a similar trial and five months later, 5 of them were still free of depression. That report detailed the spiritual benefits of psilocybin for depression.
Today’s report however details actual brain changes seen on MRI scans. Science has shown great interest in overactive areas of depressed brains such as the amygdala – the almond shaped part of the brain that houses fear, stress and other emotions. It is implicated in flight-or-flight, and many psychiatrists and energy medicine healers try to extra hard to calm the amygdala’s stress response in trauma victims. Scans have shown increased blood to the amygdala and related areas of the brain. 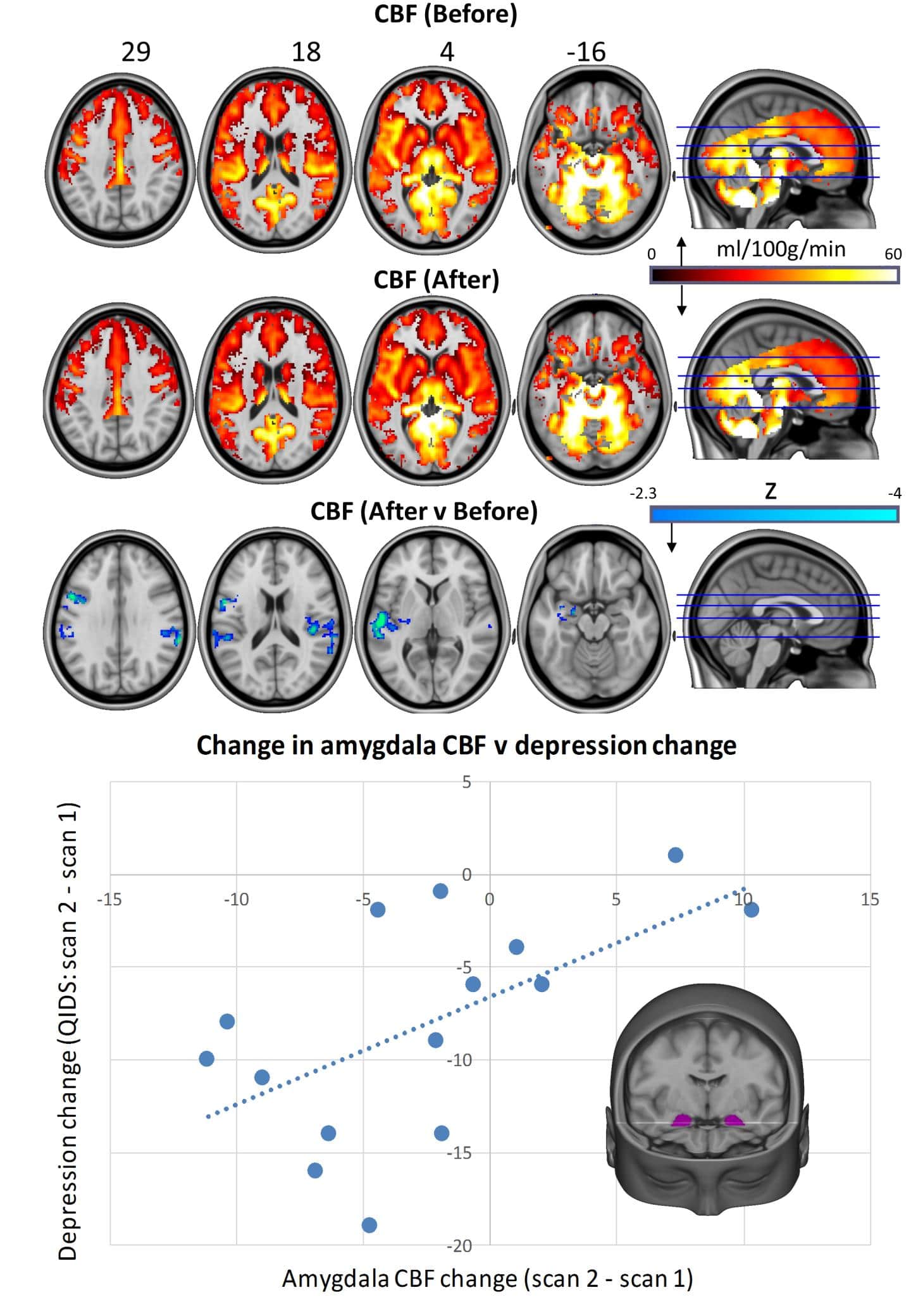 Amazingly, after the participants were given two doses of psilocybin (10 mg and 25 mg), with the second dose a week after the first – their brains showed pronounced, decreased blood flow to the areas of the brain implicated in depression. Researchers also found increased stability on parts of the brain related to depression – and these effects lasted up to five weeks.
The team described the immediate results of patients’ symptoms disappearing after the initial trip as an “afterglow” and a “disintegration” – with the compound also reintegrating brain networks afterward. The afterglow included marked improvements in mood and stress relief. Patients used a lot of computer metaphors to describe how their brains felt afterward – defragged, rebooted, and reset.
Dr Carhart-Harris explained:

Through collecting these imaging data we have been able to provide a window into the after effects of psilocybin treatment in the brains of patients with chronic depression. Based on what we know from various brain imaging studies with psychedelics, as well as taking heed of what people say about their experiences, it may be that psychedelics do indeed ‘reset’ the brain networks associated with depression, effectively enabling them to be lifted from the depressed state.

He told New Science, “We have shown for the first time clear changes in brain activity in depressed people treated with psilocybin after failing to respond to conventional treatments -Several of our patients described feeling ‘reset’ after the treatment.”

“This is further evidence that psilocybin may turn out to be effective for the most stubborn depression,” says Paul Morrison, of King’s College London. “Developments in this area are a priority in psychiatry. Some people can go through years of suffering, which resist all standard therapies.”
The researchers warn not to self-medicate as the experiment was set in the context of science with their own high-powered extracts. They would like to repeat these results but test them against control groups and current antidepressant treatments, which they plan to do in future.
About the Author
Heather Callaghan is an independent researcher, writer, speaker and food freedom activist. She is the Editor and co-founder of NaturalBlaze as well as a certified Self-Referencing IITM Practitioner.

» A single dose of psilocybin improves depression in treatment-resistant patients, but with adverse effects
» Psychedelic frees up depressed brain, study shows
» Magic Mushrooms Can ‘Reset’ the Brains of Depressed People
» Magic Mushrooms: New Research on Psilocybin and Its Benefits
» It appears the mainstream media is talking about a “Global Currency Reset”…. so I searched…