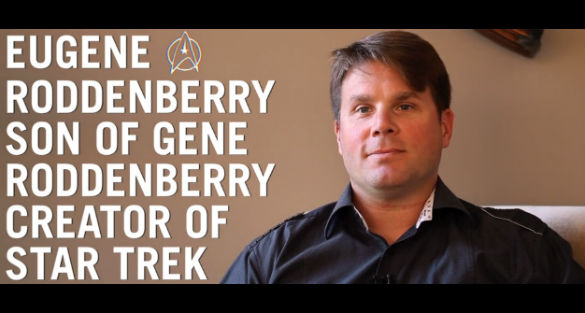 
In a newly released interview, Gene Roddenberry’s (creator of Star Trek) son, Eugene Roddenberry, discusses UFOs and aliens with investigative documentary filmmaker Jeremy Corbell. Eugene says neither he or his father, who passed away in 1991, saw a UFO, that he is aware of. However, he does believe in “life on other planets,” and he believes one day those who are searching for life elsewhere will find it.

EUGENE RODDENBERRY / speaks about Star Trek, extraterrestrial life, UFOs, advanced technologies and alien life forms from JEREMY KENYON LOCKYER CORBELL on Vimeo.
Eugene is a television producer and keeps his father’s work alive as the CEO of Roddenberry Entertainment. He is an executive producer of the franchise’s news series Star Trek: Discovery on CBS’ streaming service CBS All Access. 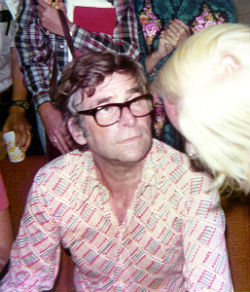 Gene Roddenberry listening to fans after his lecture at the Student Union of the University of Texas at Austin, Austin, Texas, United States. (Credit: Larry D. Moore CC BY-SA 3.0)
“I believe there’s life on other planets. I hope that they are super evolved and highly intelligent; and have chosen, not to interfere because there letting us evolve and make our own mistakes,” Eugene told Corbell. “I don’t have any fears about it. So many people will be like, oh, ‘I shouldn’t say anything because that UFO thing it’s shrouded in all this sorta like… all these crazy people talk about it.’ For me it’s very scientific and matter of fact.”
Although Eugene says he nor his father have seen a UFO, when asked if he would like to, he responded, “Are you kidding me? I’d wanna fly in one.”
Either way, he encourages those researching UFOs and alien life.
“The only thing I would wanna say to the people in this particular audience [those interested in UFOs] is, I am a believer that there is some sort of life out there, and my preference is intelligent life that’s evolved beyond ours. And I appreciate everyone who’s been out there, trying to find it, who’s been digging deep.” Eugene continued, “I do appreciate that there’s people out there who keep asking the question and keep knocking on those doors, and keep discovering things. I am excited, for you all to be vindicated. For us to meet that alien life form, or whatever it is. And for how ever many millions of you are out there, ‘See, we’re not crazy. There is life.'”

The first contact between humans and an advanced intelligent extraterrestrial species (Vulcans) portrayed on Star Trek: First Contact.
Watch the interview, and let us know what you think below. For me, I can’t help think about the scene when humans met extraterrestrials for the first time in the Star Trek franchise, which I believe was first portrayed in the Star Trek movie First Contact.
Some of you may believe such a meeting has already taken place. I am not so sure, but when it does I hope to be there. If there is any justice in the universe, one or more of us in the UFO field will be, and that will be one hell of a selfie!
For more about Jeremy Corbell, visit his website at ExtraordinaryBeliefs.com.