By Anna Hunt | Waking Times
Imagine being able to turn your food waste into clean cooking gas and nutrient-rich fertilizer, while at the same time reducing potent greenhouse gases. This was the exact vision of Israeli-based HomeBiogas, which resulted in the creation of an affordable consumer appliance that efficiently produces sustainable fuel out of kitchen scraps. In addition, the device creates a high-quality organic liquid fertilizer that can be used to nourish the plants in your garden.

Most people don’t realize that food waste is a significant problem. According to estimates, about 365 million pounds of food per day is wasted in the U.S. In other words, about 30 percent of food produced in the U.S. ends up in the landfill.

Not only is this a waste of resources, but food waste that decomposes in landfills emits methane gases into the atmosphere. Experts believe that these gases are a major contributor to climate change. If you were to image that food waste is a country, it would be the third biggest emitter of greenhouse gases, after the U.S. and China.
Here is where HomeBiogas steps in. The HomeBiogas appliance up-cycles gases put off by decomposing food and animal refuse and turns them into usable energy. This helps individuals like you and me have an effective way of recycling their expired food products and food scraps from the kitchen.
In addition to reducing harmful greenhouse emissions, the HomeBiogas system alleviates our dependence on finite sources of energy. Furthermore, it produces liquid fertilizer that nourishes the food we grow in our gardens. As a result, with this system you can turn your household into a self-sustaining ecosystem.

HomeBiogas recently announced the release of its second generation of the HomeBiogas appliance, which addresses the shortcomings of the other biogas systems.
Over 1000 pioneers in more than 70 countries installed and tested the HomeBiogas 1.0 prototype. After extensive evaluation of the feedback and continual upgrading of processes of the first-generation appliance, the company has now launched HomeBiogas 2.0 system. Each system can produce 3 hours of cooking gas and 12 liters of fertilizer daily. Moreover, it reduces carbon emissions by up to 6 tons per year. In comparison, a typical car emits about 4.7 tons of carbon each year. There is serious change potential here!
So, how does it work? First, the user deposits organic waste into the HomeBiogas appliance. Then, microorganisms decompose organic matter and produce biogas. Finally, the system pipes the emitted gas through a filter for purification and then stores it in a gas tank.
To offset the amount of food waste added, the HomeBiogas 2.0 also dispenses a liquid fertilizer. The fertilizer is rich in macro- and micro-nutrients that exist as a pr-digested solution, making it easy for the plants to absorb it. The user can easily apply liquid fertilizer to plants as a foliar spray or root drench. 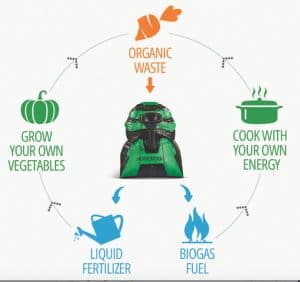 The HomeBiogas 2.0 system has its advantages over a typical composting system. In addition to the obvious advantage of being a source of renewable energy, it’s also much easier to use. There’s no shoveling or turning. It accepts almost all food waste, including things not recommended for composting like meats, dairy, fish, oils, fats and bones. Furthermore, it’s a closed system, so there are no insects or rodents, and no odors. Finally, the resulting fertilizer and biogas are available in a matter of hours, as opposed to months.


How to Reserve Your System

Although you cannot yet purchase the second-generation appliance, you can reserve your HomeBiogas 2.0 system on Kickstarter for a contribution of only $460. The company has already produced 10 systems which are in field Beta testing, but it now needs funds to jump-start mass commercial production.
For more information visit www.homebiogas.com. Also, below is an informational video.