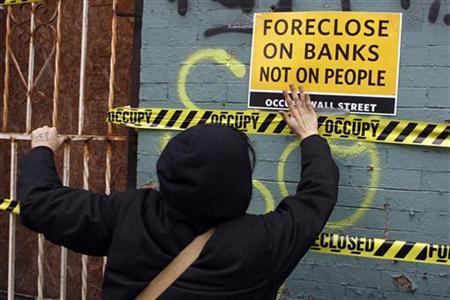 
(Reuters) – The highest court in the state of Washington recently
ruled that a company that has foreclosed on millions of mortgages
nationwide can be sued for fraud, a decision that could cause a new
round of trouble for the nation’s banks.

The ruling is one of the first to allow consumers to seek damages
from Mortgage Electronic Registration Systems, a company set up by the
nation’s major banks, if they can prove they were harmed.

Legal experts said last month’s decision from the Washington Supreme
Court could become a precedent for courts in other states. The case also
endorsed the view of other state courts that MERS does not have the
legal authority to foreclose on a home.

“This is a body blow,” said consumer law attorney Ira Rheingold.
“Ultimately the MERS business model cannot work and should not work and
needs to be changed.”

Banks set up MERS in the 1990s to help speed the process of packaging
loans into mortgage-backed bonds by easing the process of transferring
mortgages from one party to another. But ever since the housing crash,
MERS has been besieged by litigation from state attorneys general, local
government officials and homeowners who have challenged the company’s
authority to pursue foreclosure actions.

A spokeswoman for MERS said the company is confident its role in the financial system will withstand legal challenges.

The Washington Supreme Court held that MERS’ business practices had
the “capacity to deceive” a substantial portion of the public because
MERS claimed it was the beneficiary of the mortgage when it was not.

This finding means that in actions where a bank used MERS to
foreclose, the consumer can sue it for fraud. If the foreclosure can be
challenged, MERS’ involvement would make repossession more complicated.

On top of that, virtually any foreclosed homeowner in the state in
the past 15 years who feels they have been harmed in some way could file
a consumer fraud suit.

“This may be the beginning of a trend,” says Elizabeth Renuart, a
professor at Albany Law School focusing on consumer credit law.

The company’s history dates back to the 1990s, when banks began
aggressively bundling home loans into mortgage-backed securities. The
banks formed MERS to speed up the handling of all the paperwork
associated with recording the filing of a deed and the subsequent
inclusion of a mortgage in an entity that issues a mortgage-backed
security.

MERS allowed the banks to save time and money because it permitted
lenders to bypass the process of filing paperwork with the local
recorder of deeds every time a mortgage was sold.

Instead, banks put MERS’ name on the deed. And when they bought and
sold mortgages, they just recorded the transfer of ownership of the note
in the MERS system.

The MERS’ database was supposed to keep track of where those loans went. The company’s motto: “Process loans, not paperwork.”

But the foreclosure crisis revealed major flaws with the MERS database.

The plaintiffs in the Washington case, homeowners Kristin Bain and
Kevin Selkowitz, argued that the problems with the MERS database made it
difficult, if not impossible, to determine who really owned their loan.
It’s an argument that has been raised in numerous other lawsuits
challenging the ability of MERS to foreclose on a home.

“It’s going to be very easy for consumers to say they were harmed
because it’s inherently misleading,” says Geoff Walsh, an attorney with
the National Consumer Law Center. If consumers can’t identify who owns
their loan, then they don’t know whom to negotiate with, and can’t even
be certain of the legitimacy of the foreclosure.

In a statement, MERS spokeswoman Janis Smith noted that banks stopped
using MERS’ name to foreclose last year. She added that the opinion
will “create confusion” for homeowners in the state of Washington while
the trial courts consider its effect on pending cases.

Meanwhile, MERS is attempting to remake itself. The company has a new
chief executive and a new branding campaign. In Washington D.C. federal
lawmakers have recognized the need to create a national
mortgage-recording database that would track all U.S. mortgages. MERS is
lobbying to build it.