UFO News ~ ‘Leaked’ Footage of the UFO TR-3B plus MORE 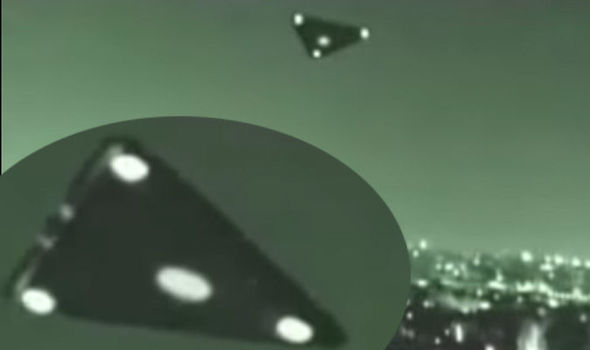 THIS video is genuine “leaked” footage of a US military secret spy craft known as a TR-3B, according to rock star Tom DeLonge.
Mr DeLonge, who gave up a career as the front man of Blink 182 to focus on UFO research, revealed the video during an interview on The Joe Rogan Experience – an online podcast hosted by stand-up comedian Joe Rogan.
The rocker has vowed to set the UFO world on fire after recruiting a team of former military and government insiders to set up the Academy To The Stars – which has promised to lift the lid on alien life.
However, the video is unlikely to add any credibility to his project which has been labelled a “joke” after it emerged the video is widely believed to be CGI “hoaxed footage”.
He revealed videos of the TR-3B during the interview, claiming they were real and leaked.

The TR-3B is alleged by conspiracy theorists to be a secret “black project” spy craft of the US government that can be flown into space.
Some alien hunters believe they are the motherships of extraterrestrials visiting Earth.
However, many conspiracy theorists believe they are actually secret aircrafts developed by the US Air Force (USAF) which are being tested.
The allegations are that these crafts are created at top-secret military bases such as Area 51 in Nevada, by reverse engineering alien technology.
Mr DeLonge is firmly in the camp that the TR-3B has been made by the government and is not an alien craft.
He believes the US government has recovered crashed UFOs flown by aliens before reverse-engineering them to create secret craft that can fly at warp speed and with anti-gravity propulsion.
Showing the video during the interview, Mr DeLonge said: “I think this was leaked on purpose because the guy is making it hard enough to see, moving the camera in and out of focus.
“That’s pretty big, I would think that was about 40 feet.
“Look see the tail fin on the back, that is how you know it’s not alien per se.
“It’s built of, I think technology, that came from there, but they don’t need vertical tail stabilisers.”
In the video a huge light blast grows from the craft before it disappears.
Mr DeLonge said: “They turn this thing on, and so right, you know they are accessing that energy I told you about – and watch what happens… it’s gone.
“Everyone thinks it is alien, and that not my belief.”
Mr Rogan then joked that if he saw it in a movie he would ask for his money back because it loped “so fake”.
But Mr DeLonge insisted it was true.
After the interview, Isaac Koi took to Facebook to slam the use of the footage.
He investigated the video in 2009 after it emerged a year earlier claiming to have been filmed in Dudley, in the West Midlands.
A year later it reemerged on YouTube amid claims it was filmed in Paris.
Mr Koi wrote: “I wrote about the relevant video of a triangular craft back in 2009, after someone in England had claimed to have taken the video in Dudley – but one of the problems with that story was it had circulated the year before as being taken over Paris.
“So, which story does DeLonge believe? Or does he believe that the same footage (including the buildings) was taken over two different countries?
“At least one of the stories associated with the video is a hoax.
“Why not both? Most of the people that commented on the video in 2008 and again in 2009 thought it was a fairly transparently CGI, and posted reasons for that conclusion.
“Those reasons were not mentioned by DeLonge when talking about this video, nor indeed was the existence of CGI when he referred to videos on Youtube “Unfortunately, Delonge’s discussion of this video simply does not address the possibility of any hoax, even when the interviewer expressly raises this.”
Josh Mobley‏ responded on Facebook: “I too was shocked that he presented this as something real.
“I’m no expert but this obviously fake.
“If this is the kind of stuff he thinks is teal then the whole thing is a joke.”
Scott Brando, a UFO debunker who funds website ufoofinterest.org, tweeted: “Another Tom DeLonge’s #EpicFail.”
Express.co.uk contacted Mr DeLong through To The Stars Academy and awaits a response.
JON AUSTIN
Express UK