OUT OF MIND » TRUTH IN CONSPIRACY THEORIES? » HISTORIES MYSTERIES » A message to the gods? Massive Geoglyphs around the world

A message to the gods? Massive Geoglyphs around the world

A message to the gods? Massive Geoglyphs around the world that can only be seen from above


Geoglyphs are figures and/or symbols built on hillsides or plains, using different techniques like adding stones with dark tones of volcanic origin as a mosaic, to contrast on a lighter background characteristic of deserts, or removing the surface layer of the ground, usually darker due to oxidation, to make the lighter background visible.
This type of representation is found all over the world, but some of the most famous geoglyphs are located in South America.
We have the geoglyphs of Nazca (Peru), the Amazonian geoglyphs in Acre, Rondonia (Brazil) and the geoglyphs of Chug-Chug in the Atacama Desert (Chile), an area that contains some of the most significant quantities of geoglyphs in the world, as well as some of the oldest, ever found.
But these mysterious structures/etchings are not limited only to the countries mentioned above.
Recently experts have found mysterious symbols created thousands of years ago In Saudi Arabia and even Jordan.
Some of these figures were identified using satellite images from space.
Here, we take a look at some of these incredible geoglyphs and ask, what was their purpose? And if they are meant to be seen only from above? Who were they made for?
Chiza Geoglyphs

The Chiza Geoglyphs are a series of anthropomorphic and zoomorphic figures created in the Cuesta de Chiza, Tarapacá Region, Chile. The geoglyphs are located in the middle of the Atacama Desert, on the edge of Route 5, 80 km south of Arica. As they are on the side of the mountain, they can be seen from the air but as well from the ground.
The Chiza Geoglyphs were created using black rocks placed on the sand, forming figures of humans, birds and other animals. It is presumed that they were created between the year 500 and 900 AD. In the 1980s, the archeologist Luis Briones restored them, a fact highly criticized by those who adhere to the natural degradation of things.
Steppe Geoglyphs

The Steppe Geoglyphs are some of the more recent symbols discovered on Earth.
The so-called steppe geoglyphs constitute a monumental set of images only visible from the air located in the steppes of Kazakhstan; they were identified for the first time in 2007 by Dmitry Dey, a Kazakh economist who loves archeology.
Using Google Earth, Dmitriy Dey discovered no less than 260 figures among mounds, ditches, and embankments arranged in five basic forms in the Turgai region of northern Kazakhstan.
The largest figure, called Ushtogaysky Square because it is near the village of Ushtogaysky, was created near a Neolithic site and consists of a giant square formed by 101 mounds whose vertices are joined by a diagonal cross inscribed in the square; it has an extension greater than the Pyramid of Cheops.
Another interesting figure is the so-called Cross of Koga, a swastika with three arms each topped by a horizontal line with opposite zigzag ends.
Archaeologists believe these designs may be related to the Mahandzhar culture, which flourished there between 7,000 and 5,000 BC. Researchers suggest that the oldest figures could have been used as solar observatories with a function similar to that of Stonehenge.
The Nazca Lines 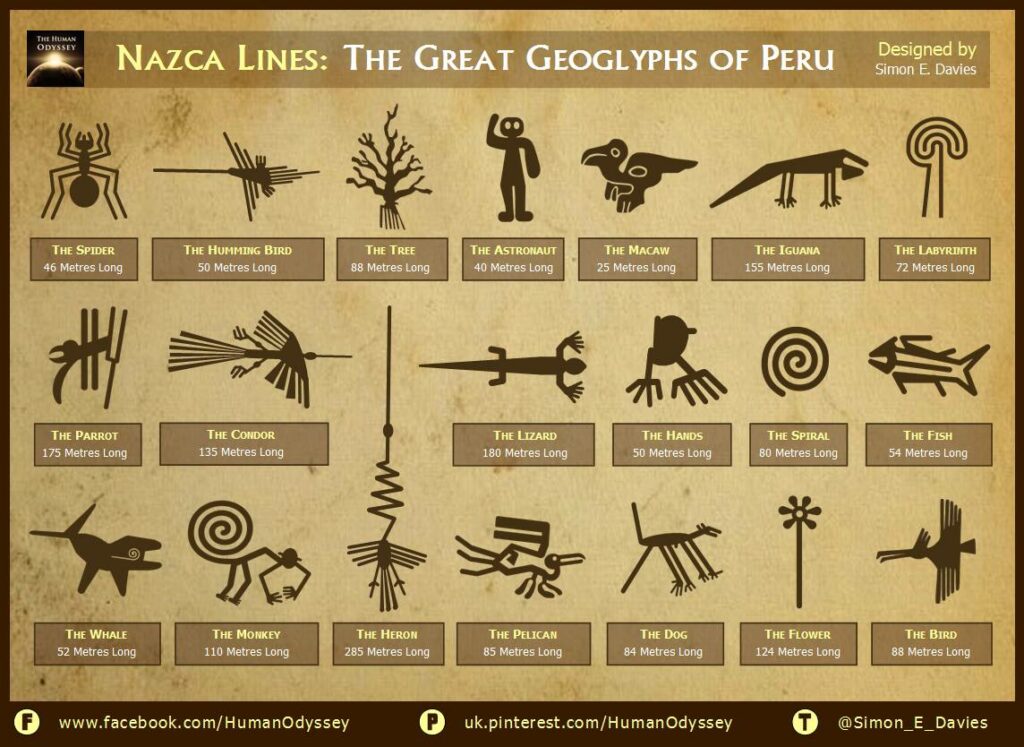 They are believed to have been created by the Nazca culture and are composed of several hundred figures ranging from simple designs such as lines to complex zoomorphic, fitomorphic and geometric figures that appear traced on the earth’s surface. The Nazca lines are best appreciated from the air.
Pintado Geoglyphs 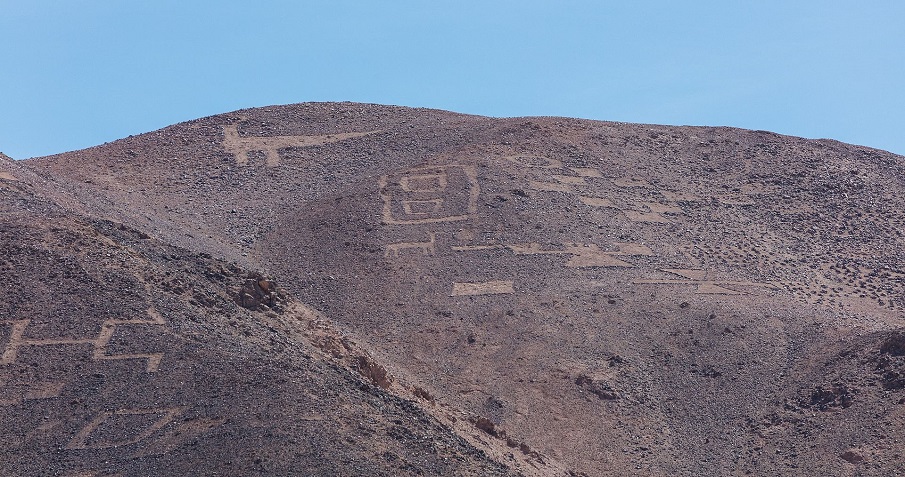 Cerros Pintados, Pampa del Tamarugal, Chile. Image Credit
The Pintado Geoglyphs are a series of geoglyphs located in the Pampa del Tamarugal, in the Tarapacá Region (Chile). They are located approximately 95 kilometers away from Iquique, in the commune of Pozo Almonte.
Representing different symbols and humanoid figures, these glyphs are also best appreciated when observed from the air.
The Structures of Saudi Arabia 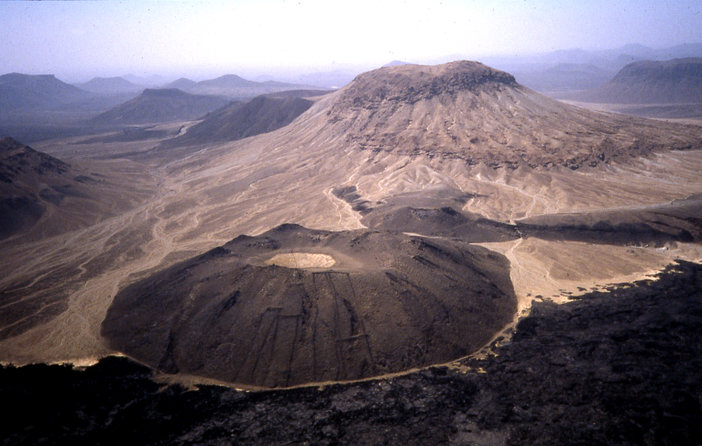 This picture of the lava dome that has gates on it was taken in the 1980s by Vic Camp. The taller lava dome behind it is called “Jabal Abyad” a name which means “white mountain” in Arabic. The lava domes are no longer active although in the past basalt lava poured from them.
The enigmatic symbols of Saudi Arabia have only been identified recently.
Around 400 mysterious stone structures, which according to experts, date back thousands of years, have been discovered in thanks to satellite images on Google Earth. Archaeologists believe that the ancient stone structures are around 7,000 years old. The smallest of these structures—gates—extends around 13 meters while the longest one stretches out for a staggering 518 meters in length.
The Chug-Chug Geoglyphs

The Chug-Chug geoglyphs are a series of ancient symbols carved in the Atacama Desert in Chile.
The area near the geoglyphs is well-known archaeologically, as it features 23 archaeological sites, preserving nearly 500 geoglyphs distributed along old caravan routes between the oasis of Calama and Quillagua, the base of an extinct pre-Hispanic town.
Experts suggest that the odes Geoglyphs at Chug-Chug date back to 1000 BC, while most originated between 900 and 1550 AD. Just as the Nazca Lines, the geoglyphs of Chug-Chug include human figures, zoomorphic designs of animals such as birds and llamas and geometric figures like circles and rhombuses.

Ivan
Ivan is editor-in-chief at ancient-code.com, he also writes for Universe Explorers. You may have seen him appear on the Discovery and History Channel.
https://www.ancient-code.com

OUT OF MIND » TRUTH IN CONSPIRACY THEORIES? » HISTORIES MYSTERIES » A message to the gods? Massive Geoglyphs around the world

» Could these be an "Ancient Coded Message?" - Strange Geoglyphs Sending Message to Space?
» Kp Message 2-5-13… “‘Massive’ Changes are All Around… and Within”
» Kp Message 7-5-18… “Something quite ‘Massive’ is now in motion”
» Kp Message 8-21-18… “Massive Energetic Releases and Transformations Continuing”
» 14 Massive Monoliths Of The Ancient World