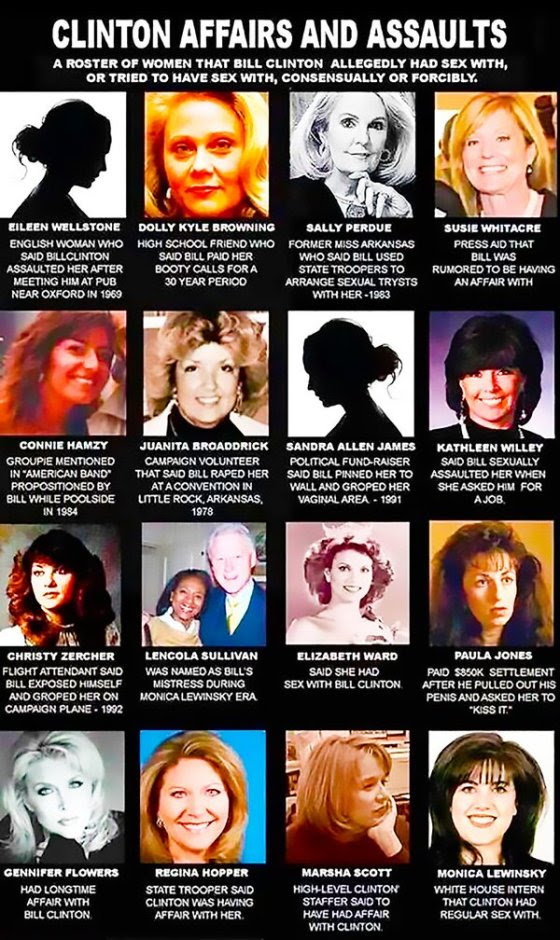 By Valerie Richardson - The Washington Times - Wednesday, November 15, 2017
Whenever a Republican — in this case, Alabama Senate hopeful Roy Moore — is accused of sexual harassment, his backers are sure to counter the Democratic onslaught with three little words: Remember Bill Clinton?
Democrats have been foiled time and again from claiming the moral high ground on sexual misconduct thanks in large part to their decision in the 1990s to ignore, excuse and rebut the well-documented sexual transgressions of the president.
After 25 years, however, some liberals finally are asking whether it’s time to deal with their Bubba problem.
“It’s only taken 20 years, but the tide seems to finally be turning against Clinton,” the conservative news website Resurgent said Wednesday.
No sooner had the Moore scandal erupted last week than multiple liberal media figures declared it was time to hold Mr. Clinton accountable, a dramatic about-face that prompted kudos from the right as well as skepticism over the political calculus.
“[T]hat belatedness has become the subject of ridicule and scorn among some conservatives, who note that Bill Clinton was only finally sent under the bus after he became politically expendable,” said Townhall.com editor Guy Benson.
The first sign that Mr. Clinton’s days as a Democratic icon may be numbered came in a tweet Friday from MSNBC host Chris Hayes.
“As gross and cynical and hypocritical as the right’s ‘what about Bill Clinton‘ stuff is, it’s also true that Democrats and the center left are overdue for a real reckoning with the allegations against him,” Mr. Hayes said.
After Mr. Hayes’ commentary came the deluge. New York Times columnist Michelle Goldberg declared in a Tuesday op-ed that “I Believe Juanita,” referring to Arkansas business owner Juanita Broaddrick, whose 1989 accusation that Mr. Clinton raped her in 1978 has long been dismissed by Democrats.

The same day, The Atlantic magazine ran an op-ed by contributing editor Caitlin Flanagan headlined, “Bill Clinton: A Reckoning,” which recalled how Mr. Clinton was rescued in the 1990s by “machine feminism” in a low point for the women’s movement.
She cited feminist icon Gloria Steinem’s 1998 op-ed in The New York Times insisting that Mr. Clinton was guilty not of sexual harassment but rather of having made a “pass” at Kathleen Willey after she said he groped and rubbed his crotch against her in the Oval Office.
In doing so, Ms. Steinem “slut-shamed, victim-blamed, and age-shamed,” said Ms. Flanagan, thus establishing “contemporary feminism as a weaponized auxiliary of the Democratic Party.”
Ms. Steinem wasn’t alone. Newsweek’s Nina Burleigh was famously quoted in 1998 saying that she would be “happy to give him [oral sex] just to thank him for keeping abortion legal.”
“If [Harvey] Weinstein and Mark Halperin and Louis C.K. and all the rest can be held accountable, so can our former president and so can his party, which so many Americans so desperately need to rise again,” Ms. Flanagan said.
Columnist Nicole Hemmer said Tuesday that the “most pressing issue for Democrats is Bill Clinton” if they are to rebound in 2018 and 2020. She urged them to “confront their mistakes and misdeeds in the realm of sexual harassment.”
“In practical terms, that means not having Bill Clinton speak at the 2020 convention, and keeping him off the campaign trail,” Ms. Hemmer said in U.S. News & World Report.
Another liberal media figure, Vox.com’s Matthew Yglesias, took it a step further Wednesday with an article declaring, “Bill Clinton should have resigned.”
Why the sudden willingness to relitigate the Clinton case? Part of the reason lies in the ongoing uproar surrounding sexual harassment unleashed by last month’s accusations by multiple women against Hollywood producer Harvey Weinstein, which has since expanded to include dozens of celebrities and political figures.
But the political landscape also has shifted, as conservatives have observed.
After years of supporting the Clintons, Democrats no longer have to worry about keeping Mr. Clinton in the White House or protecting the feminist image of Hillary Clinton, first during her Senate career and then her 2008 and 2016 presidential runs.
With Mrs. Clinton’s political career presumably over, the costs of shielding Mr. Clinton from criticism apparently outweigh the benefits.
“Let’s just say that discarding the Clintons when they’re no longer politically useful to retroactively grab the higher moral ground isn’t exactly an act of heroism,” said Federalist Senior Editor David Harsanyi. “This isn’t a reckoning as much as it is a face-saving.”
Skeptics also asked whether Mr. Clinton would be coming under fire if his wife had won the White House.
“Don’t believe this moralize claptrap for a second,” RedState said Wednesday in a post. “The sole purpose of this newfound belief in the dignity of women is due to the fact that Roy Moore may lose a Senate seat. The moment a Democrat politician comes under scrutiny we’ll be back to [the] Gloria Steinem defense of Bill Clinton on the allegations by Kathleen Willey.”
Others have cast suspicion on the seemingly coordinated timing of the media backlash against Mr. Clinton.
Conservative commentator Stephen L. Miller said Tuesday in a tweet that “just like firefighters rushing toward a burning building, we rush toward a story that is 25 years old and is now politically expedient.”
Added conservative tweeter Sister Toldjah: “And all of them mysteriously figure it out at the same time and write similar pieces within days of each other.”

All these women should get themselves checked, because they could be ALL HIV positive, just like he is- Another scandal that is yet to erupt-

More of the 'Dog & Pony' show... Ya didn't nail his ass to the wall then, what's the point now. Just put the both of them in box together (they deserve each other) and drop it in a hole. Then move on to the next in line...