OUT OF MIND » MOTHER NATURE » SCIENCE & TECHNOLOGY » Reckless and unregulated: Biohackers are using CRISPR to edit their own DNA

Reckless and unregulated: Biohackers are using CRISPR to edit their own DNA

Reckless and unregulated: Biohackers are using CRISPR to edit their own DNA Tue Nov 21, 2017 12:33 am 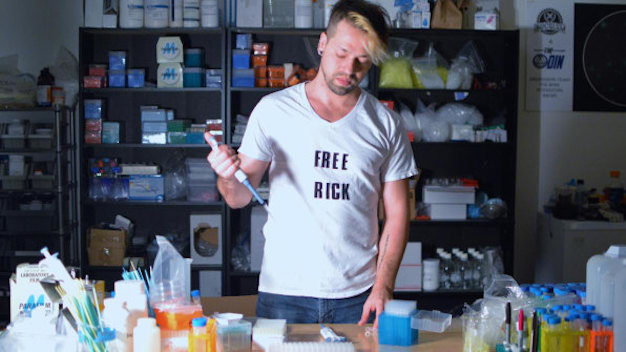 The ODIN
Zayner, a biohacker, gave a talk called “A Step-by-Step Guide to Genetically Modifying Yourself With CRISPR” at the SynBioBeta conference.
by Adele Peters, Fast Company

“What we’ve got here is some DNA, and this is a syringe,” Josiah Zayner tells a room full of synthetic biologists and other researchers. He fills the needle and plunges it into his skin. “This will modify my muscle genes and give me bigger muscles.”
Zayner, a biohacker-basically meaning he experiments with biology in a DIY lab rather than a traditional one-was giving a talk called “A Step-by-Step Guide to Genetically Modifying Yourself With CRISPR” at the SynBioBeta conference in San Francisco, where other presentations featured academics in suits and the young CEOs of typical biotech startups. Unlike the others, he started his workshop by handing out shots of scotch and a booklet explaining the basics of DIY genome engineering.
If you want to genetically modify yourself, it turns out, it’s not necessarily complicated. As he offered samples in small baggies to the crowd, Zayner explained that it took him about five minutes to make the DNA that he brought to the presentation. The vial held Cas9, an enzyme that snips DNA at a particular location targeted by guide RNA, in the gene-editing system known as CRISPR. In this case, it was designed to knock out the myostatin gene, which produces a hormone that limits muscle growth and lets muscles atrophy. In a study in China, dogs with the edited gene had double the muscle mass of normal dogs. If anyone in the audience wanted to try it, they could take a vial home and inject it later. Even rubbing it on skin, Zayner said, would have some effect on cells, albeit limited.
Zayner has a PhD in molecular biology and biophysics, and worked as a research fellow at NASA modifying organisms for life on Mars. But he envisions that synthetic biology for editing other organisms or yourself could become as simple to use as, say, a drag-and-drop platform for making a website.
“You don’t need to know what promoter to use to make this gene or this piece of DNA work,” he says, using some technical terms for the DNA engineering process. “You don’t want to know what terminator to use, or origin of replication . . . The DNA programmer should know how to do that stuff. But the only thing you should have to know is, alright, I want to engineer a mushroom to be purple. That’s as difficult as it should be for a human being to genetically modify something. All of that’s totally possible-it’s just building the infrastructure and platform so someone can do that.”
Of course, an app store for genetic editing doesn’t yet exist. But a growing number of biohackers have learned enough that they are beginning-however ill-advisedly-to experiment on themselves. Several people Zayner knows, for example, have started injecting themselves with myostatin. “This is happening right now,” he says. “All this stuff is starting to come to an inflection point in the last few weeks.” It’s too early to say whether the shots will leave experimenters jacked, or potentially cause problems, but some people hope to start to see results in the coming months.
Despite his time in academia, Zayner is clearly not a typical researcher, and eschews the idea that experimentation should be confined to labs. While at NASA, he started connecting with other biohackers through a mailing list, and recognizing the problems for those who wanted to do DIY work-supplies were hard to find, and suppliers wouldn’t necessarily ship to someone who didn’t have a lab-he started a business in 2013 called The ODIN (Open Discovery Institute, and an homage to the Norse god) to start shipping kits and tools to people who wanted to work in their garage or living room. In 2015, after deciding to leave NASA because he didn’t like working in its traditional environment, he launched a successful crowdfunding campaign for a DIY CRISPR kit.
In 2016, he sold $200,000 worth of products, including a kit for yeast that can be used to brew glowing bioluminescent beer, a kit to discover antibiotics at home, and a full home lab that’s roughly the cost of a MacBook Pro. In 2017, he expects to double sales. Many kits are simple, and most buyers probably aren’t using the supplies to attempt to engineer themselves (many kits go to classrooms). But Zayner also hopes that as people using the kits gain genetic literacy, they experiment in wilder ways. 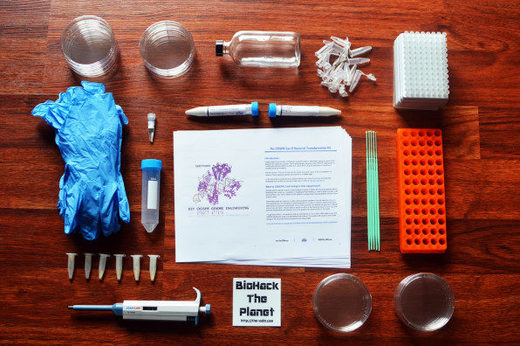 He questions whether traditional research methods, like randomized controlled trials, are the only way to make discoveries, pointing out that in newer personalized medicine (such as immunotherapy for cancer, which is personalized for each patient), a sample size of one person makes sense. At his workshop, he argued that people should have the choice to self-experiment if they want to; we also change our DNA when we drink alcohol or smoke cigarettes or breathe in dirty city air. Other society-sanctioned activities are more dangerous. “We sacrifice maybe a million people a year to the car gods,” he said. “If you ask someone, ‘Would you get rid of cars?’-no.” (Zayner has also self-experimented in other ways, including an extreme DIY fecal transplant that he says cured his digestive problems; he also helps cancer patients with DIY immunotherapy).
If you modify your DNA, it’s possible to then sequence your DNA to see if you made the targeted change. But a garage experiment also can’t provide as much information as more conventional methods. “You can confirm that you’ve altered the DNA, but that doesn’t mean that it’s safe and effective,” says George Church, professor of genetics at Harvard Medical School (who also serves as an advisor to Zayner’s tamer kit company, recognizing the value of a biology-literate public in what’s being called the century of biology). “All it does is tells you that you’ve molecularly done the right thing, but it could be unsafe because you’ve also done something off-target. It could be ineffective in the sense that not enough cells were altered, or it’s too late in life and the damage has already been done.” If a baby is born with microcephaly, for example, changing the genes in its body likely won’t be able to change the effects of the condition on its brain.
Comment: On of the most dangerous ideas being propagated is that CRISPR and related technologies are capable of creating precise, accurate and specific alterations to DNA and that we have control over the consequences for the organism. Yet, a supposedly simple genetic tweak can have wide effects on the organism throughout its lifecycle.

God’s red pencil? CRISPR and the myths of precise genome editing
If CRISPR were already precise, accurate and specific there would, for example, be no publications in prominent scientific journals titled “Improving CRISPR-Cas nuclease specificity using truncated guide RNAs.” And these would not begin by describing how ordinary CRISPR “can induce mutations at sites that differ by as many as five nucleotides from the intended target,” i.e. CRISPR may act at unknown sites in the genome where it is not wanted.
[..] Why is this discussion of precision important? Because for the last seventy years all chemical and biological technologies, from genetic engineering to pesticides, have been built on a myth of precision and specificity. They have all been adopted under the pretense that they would function without side effects or unexpected complications. Yet the extraordinary disasters and repercussions of DDT, leaded paint, agent orange, atrazine, C8, asbestos, chlordane, PCBs, and so on, when all is said and done, have been stories of the steady unraveling of a founding myth of precision and specificity.

Anyone who chooses to inject themselves with modified DNA is taking a risk without enough data-or, arguably, any real data at all-about what might happen to make an informed decision. It probably goes without saying: Don’t try this at home. “We are at an incredible point where we’re learning an enormous amount about biology and genetics through the power of CRISPR, but there’s still a lot that we don’t know about the safety of editing human cells with CRISPR,” says Alex Marson, a researcher in microbiology and immunology at the University of California-San Francisco and an expert in CRISPR. “It’s critical that this goes through careful and rigorous safety tests for each application, and it’s done in a responsible manner.”
In Germany, biohacking is now illegal, and someone doing experiments outside a licensed lab could face a €50,000 fine or three years in prison. The World Anti-Doping Agency now bans all forms of gene editing on athletes. In the U.S., however, biohacking isn’t yet regulated. Zayner doesn’t think that it should be, and compares concerns about people learning how to use synthetic biology to concerns about people learning how to use computers in the early 1980s. (He cites a 1981 interview in which Ted Koppel asked Steve Jobs if there was a danger of people becoming controlled by computers.) Zayner hopes to continue to help as many people as possible become more “DNA literate.”
“I want to live in a world where people are genetically modifying themselves. I want to live in a world where all these cool things we see in sci-fi TV shows are real. Maybe I’m crazy and stupid . . . but I think maybe this is actually possible.”
That’s why, he says, he injected himself in front of the crowd at the conference. “I want people to stop arguing about whether it’s okay to use CRISPR or not use CRISPR, or it’s okay to genetically modify yourself,” he says. “It’s too late: I already made the choice for you. Argument over. Let’s get on with it now. Let’s use this to help people. Or to give people purple skin.”
Comment: Further reading:

OUT OF MIND » MOTHER NATURE » SCIENCE & TECHNOLOGY » Reckless and unregulated: Biohackers are using CRISPR to edit their own DNA