We Are Heading Full Steam Into The Biggest Credit-default Cycle In Our Nation’s History Tue Nov 21, 2017 7:10 pm

From Porter Stansberry in Stansberry Digest:
This week, my famously bullish colleague Steve Sjuggerud mentioned a word of caution for the first time in many, many years…
In today’s Digest, I (Porter) will point out a second – and in my view, even more worrisome – sign that this aging bull market is definitely running out of steam.
But as always, before we get to the “meat and potatoes” of this week’s missive… just a few simple reminders.

I write these weekly letters personally. I’ve done so since 1999 when I founded Stansberry Research from my kitchen table. You see, after bombarding you with e-mail advertisements all week and tweaking your emotional (fear and greed) buttons to sell subscriptions, I feel a tremendous obligation to provide you with the information I’d most want if our roles were reversed.
Sadly, that frequently means telling you something you don’t want to hear and are likely to ignore. Often enough, telling folks the difficult truth about financial circumstances causes them to cancel their subscriptions, or as I like to say, “part as friends.”
And I have a feeling that might happen today.
You see, we’re entering into an incredibly dangerous phase of this bull market. Ironically, that also means most people will find stocks simply irresistible. But trust me, friends… it’s time to start selling.
Let me show you why…
Many, many obvious signs point to a gigantic financial bubble…

It’s sovereign debt. Major governments around the world have gone mad with debt.
I won’t bore you with the details (I promise). But consider this…
For a period of almost 20 years – between 1979 and 1998 – the 10-year average growth rate in U.S. federal debt was more than 100%. That first big “spurt” of U.S. debt growth peaked in 1991 (with a 10-year increase in federal debt of 228%) that saw total federal debt per person in the U.S. grow from $3,700 to $20,000 by 1998.
As I’m sure you’ll recall, the period between the early 1980s and the 1990s was generally fantastic for the stock market and for investors. At the beginning of a massive credit boom, everything seems great. That’s because when credit growth far exceeds savings, it allows an economy to consume far more than it’s producing.
This “pulls forward” consumption, magnifies economic growth, and increases spending and usually wages, too. It’s a boom!
But by 1998, so much consumption had been pulled forward that not enough global aggregate demand was left. A huge bust emerged, which hit commodities and emerging markets. Russia defaulted. Eventually, these problems caused the tech and telecom bubbles to burst, and the U.S. saw a severe bear market. Tech stocks fell about 80% from their peak.
We’re about to see a similar bust.
Over almost the entire last decade, we’ve seen another huge increase to government debt…
Since 2009, U.S. government debt has again more than doubled on a rolling 10-year basis, peaking at 137% in 2012. By the end of this year, total federal debt per person in America will reach $62,000. That’s nearly $250,000 for a family of four.
And that’s just the federal debt that we’ve created in this generation.
On a per-capita basis, federal debt has more than tripled since 2000. You might have noticed that wages and the economy haven’t tripled…
OK, no more data, I promise…
Since this boom began in 2009, almost nobody has paid any attention to this massive increase in federal debt. You haven’t heard a word about our deficits from our politicians. Nobody cares. Why? Because since 2009, these debts haven’t caused our country’s borrowing costs to rise.
Even though total federal debt outstanding has increased by 126% since 2008, our borrowing costs have fallen. We’re still paying about the same amount in interest on this debt as we did back in the early 1990s, when our national debt was only 22% of the size of today’s burden.
The thing that matters to policymakers is how much the debt costs to maintain, not how much it costs to repay. That’s why you haven’t heard anything about it.
Nobody is paying any attention to what’s about to happen next…
As you know, the Federal Reserve has allowed the government to take on these massive debts by buying huge amounts of the debt that has been issued, and by manipulating interest rates lower so that borrowing costs were affordable.
That’s causing big dislocations in the rest of the financial system. Low interest rates are mostly responsible for stocks soaring. (Price-to-earnings multiples expand as interest rates fall.)
The Fed’s manipulation of interest rates also explains how and why consumer lending has reached all-time highs. As interest rates fell, lenders were forced to buy riskier and riskier loan portfolios to earn enough yield to match funding requirements for insurance portfolios and pensions.
The ongoing debt explosion is finally reaching its peak…
Lots of those consumer loans are starting to go bad. We first saw default rates creeping up in subprime auto loans (as we warned they would).
Now, credit-card default rates are moving higher, too. Soon, the mirage of student lending is going to completely fall apart. That’s when we’ll see fireworks across the credit spectrum. But that’s not all…
Just as defaults are rising, the Fed has begun to raise rates.
Look at what that’s going to do to the U.S. government’s funding costs over the next few years, according to projections from the Congressional Budget Office. Interest payments will nearly double, going from 6% to 11% of the federal budget… 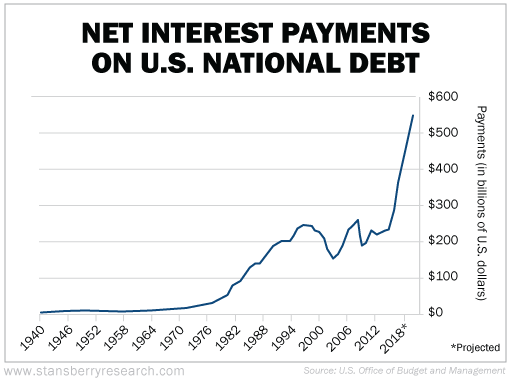 These rising costs are going to have a profound effect on the current widespread political belief that “deficits don’t matter,” just as soaring default rates on consumer lending are going to lead to much tougher lending standards on cars, colleges, and credit cards. All of that consumption that we’ve enjoyed on credit for the last decade is going to come back to haunt us. All of us.
If I’m right…
If the credit boom is over and the default cycle has begun, we should see plenty of warning signs in the months to come.
First, the stock market “lions” we saw back in late 2015 will re-emerge. Transportation stocks will begin to disappoint as new orders for manufacturing decline. (That’s what Steve pointed out in the warning I referenced earlier.)
You should also see the yield curve invert early next year. That’s extremely dangerous for financial stocks.
The Fed is raising short-term interest rates. But long-term interest rates aren’t rising much. That’s because they’re based on the economy’s long-term growth potential. With such large debt burdens, we’re unlikely to see 3% growth going forward. We haven’t sustained rates of growth at that level since before President Obama. An inverted yield curve is a “get out” warning for financial stocks, so keep your eyes on the “spread” between two-year sovereign debt and 10-year sovereign debt… 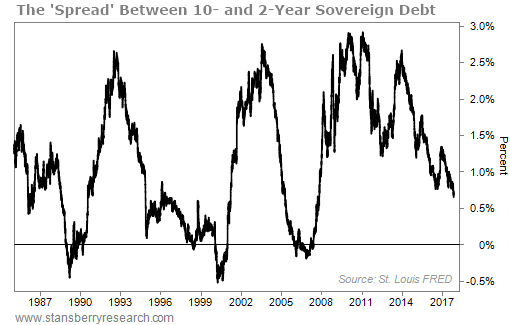 As you can see, the spread has been decreasing since 2013… and could turn negative by early next year. I believe that’s inevitable if the Fed continues to raise rates.
That’s a big red flag for this bull market…

This historic bull market has largely been the creation of low interest rates and buoyant credit markets.
“Happily,” these tightening financial conditions and rising borrowing costs are arriving just in time for a huge wave of corporate high-yield bond maturities in 2018 and 2021. More than $1 trillion worth of speculative bonds is coming due before the end of 2021. There’s no way the majority of these loans can be repaid or refinanced.
A particular worry is the debt related to retail/malls, high-cost energy production, and legacy media and entertainment.
As I’ve long predicted, the end of this credit cycle will see the greatest legal transfer of wealth in history as equity holders are wiped out when these bonds default. We haven’t hit our big home run yet with our Stansberry’s Big Tradestrategy… But it’s coming.
So, my friends, just a simple warning…
We are heading full steam into the biggest credit-default cycle in our nation’s history… 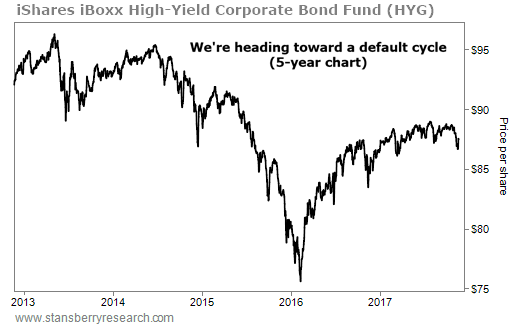 Do you think we’re prepared as a nation to ride out this storm? No way. Get ready for some real political fireworks.
Do you think the “marginalized” members of our society are angry today, crying over statues, bitching about who gets to play quarterback, and rioting over a few police shootings? Just wait until their food stamps won’t cash… until doctors stop showing up for Medicare work… until their pensions collapse… and until the police strike over unpaid wages.
Oh, yes… it’s all coming. And maybe a “Debt Jubilee,” too.
Whoops, I’m sorry. Not bullish enough for you? Too bad.
One last thing…
I’ve followed Grant Williams for more than a decade. He’s a world-class economist based in Singapore. He has been warning about many of the same credit-related problems I’ve been writing about.
He presented at our Stansberry Alliance Conference in September. I asked him for a significant personal favor: to be allowed to share his incredible presentation with you. He agreed. You’ll find the video to his presentation below. I hope you’ll take a few minutes and listen to his knowledgeable, contrarian view.

Re: We Are Heading Full Steam Into The Biggest Credit-default Cycle In Our Nation’s History Wed Nov 22, 2017 11:08 am

Re: We Are Heading Full Steam Into The Biggest Credit-default Cycle In Our Nation’s History Wed Nov 22, 2017 11:56 am

Admin
Posts : 108362
Join date : 2012-01-04
Location : Woodstock Nation
For certain!
My son in law, that is now a VP at a large bank, advised me to put my house on the market immediately and not to wait until Feb 2018 as I had hoped to stay in my home through the winter.
He said that what is coming next year will be worse then the 2009 crash. Also the debt collector I was working with in this foreclosure process told me that the lenders that he is working with are now pushing through mortgages which he sounded surprised by. Sound familiar?
So people might want to consider removing as much as they possibly can from bank accounts etc.
Those that think that Cheetoman45 is in place to usher in a new financial stability will be very surprised I think.