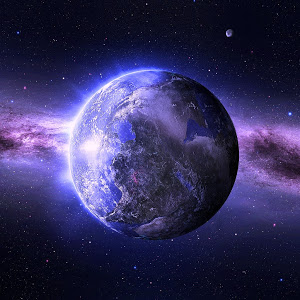 More than 15,000 scientists from 184 countries have issued a warning: Mankind must take immediate action to reverse the effects of climate change, deforestation and species extinction before it’s too late.

The warning, issued by the Alliance of World Scientists and published in the journal Bioscience, comes on the 25th anniversary of a similar warning from the Union of Concerned Scientists that was titled “World Scientists’ Warning to Humanity”. The new letter, however, has 10 times as many scientists endorsing it.

“On the 25th anniversary of their call, we look back at their warning and evaluate the human response by exploring available time-series data,” the paper reads. “Especially troubling is the current trajectory of potentially catastrophic climate change due to rising GHGs from burning fossil fuels (Hansen et al. 2013), deforestation (Keenan et al. 2015), and agricultural production—particularly from farming ruminants for meat consumption (Ripple et al. 2014). Moreover, we have unleashed a mass extinction event, the sixth in roughly 540 million years, wherein many current life forms could be annihilated or at least committed to extinction by the end of this century.” 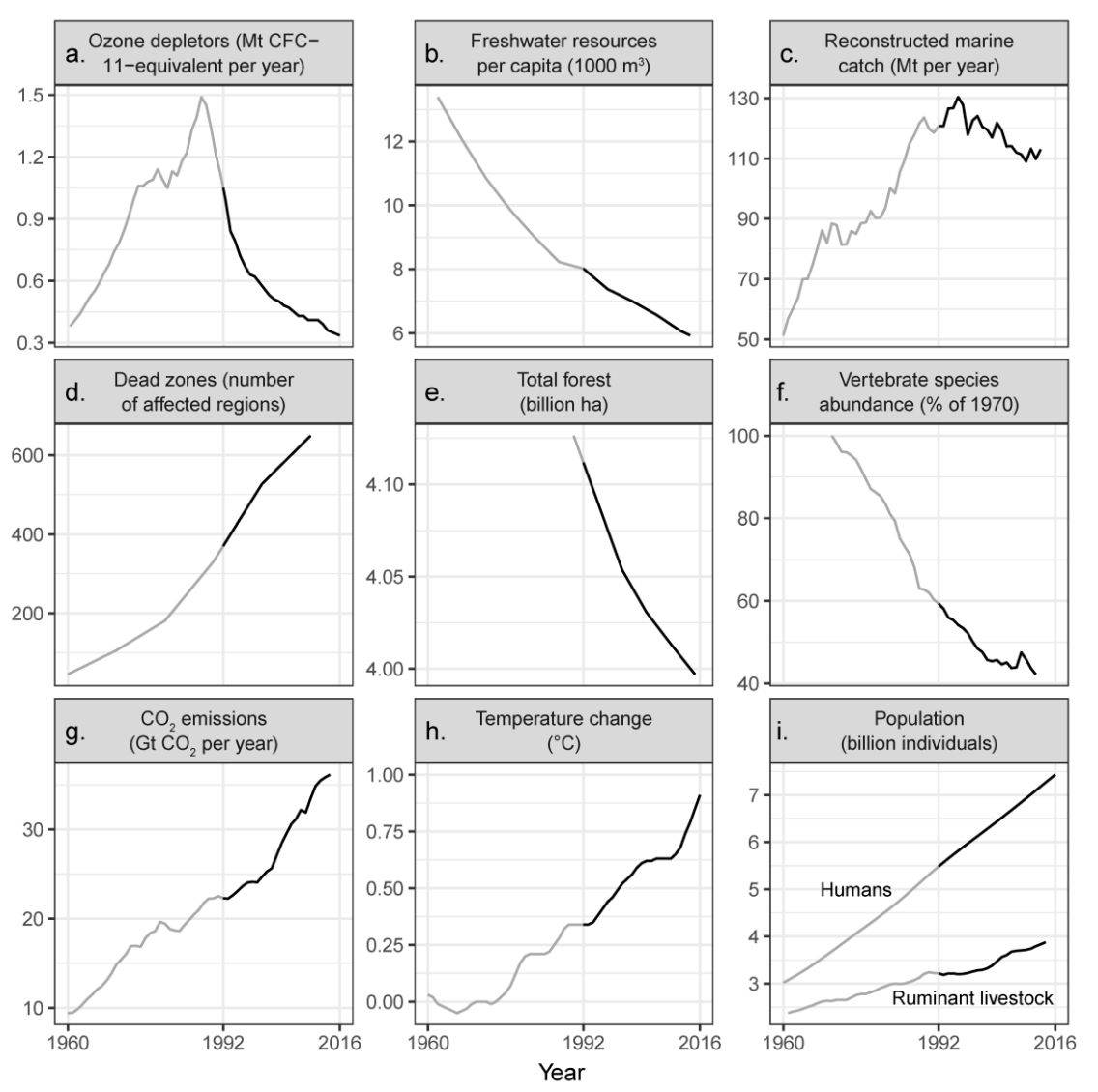 OVERVIEW OF THE WARNING

The [url=http://scientistswarning.forestry.oregonstate.edu/sites/sw/files/Ripple_et_al_11-3-17 Scientists main text.pdf]paper[/url] outlines some of the world’s most pressing environmental concerns, most of which have only worsened since 1992. They’re summarized here:

Unsustainable marine fisheries – In 1992, the total marine catch was at or above the maximum sustainable yield and fisheries were on the verge of collapse. Global catch rates have decreased, though fishing efforts are increasing.

Ocean dead zones – Coastal dead zones which are mainly caused by fertilizer runoff and fossil-fuel use, are killing large swaths of marine life. Dead zones with hypoxic, oxygen-depleted waters, are a significant stressor on marine systems and identified locations have dramatically increased since the 1960s, with more than 600 systems affected by 2010.

Forest losses – The world’s forests are crucial for conserving carbon, biodiversity, and freshwater. Between 1990 and 2015, total forest area decreased from 4,128 to 3,999 million ha, a net loss of 129 million ha which is approximately the size of South Africa.

Dwindling biodiversity – The world’s biodiversity is vanishing at an alarming rate and populations of vertebrate species are rapidly collapsing (World Wildlife Fund 2016). Collectively, global fish, amphibians, reptiles, birds, and mammals declined by 58% between 1970 and 2012.

Climate change – Global fossil-fuel carbon dioxide emissions have increased sharply since 1960. Relative to the 1951-1980 average, global average annual surface temperature, in parallel to CO2 emissions, has also rapidly risen as shown by 5-year mean temperature anomaly. The 10 warmest years in the 136-year record have occurred since 1998.

Population growth – Since 1992, the human population has increased by approximately 2 billion individuals, a 35% change. The world human population is unlikely to stop growing this century and there is a high likelihood that the world population will grow from 7.2 billon people now to between 9.6 and 12.3 billon by 2100.

It wasn’t all awful news, however.

The paper explains how the global rate of ozone-depletion has actually improved since 1992. This reversal has most likely been due to hot air and a massive, decades-long international effort to ban ozone-depleting chemicals.

“The rapid global decline in ozone-depleting substances shows that we can make positive change when we act decisively. We have also made advancements in reducing extreme poverty and hunger (www.worldbank.org). Other notable progress (which does not yet show up in the global data sets in figure 1) include: the rapid decline in fertility rates in many regions attributable to investments in girls’ and women’s education (www.un.org/esa/population), the promising decline in the rate of deforestation in some regions, and the rapid growth in the renewable-energy sector. We have learned much since 1992, but the advancement of urgently needed changes in environmental policy, human behavior, and global inequities is still far from sufficient.”

Still, one factor that could seriously exacerbate global environmental problems is population growth – specifically the growing middle class. Although a fast-growing middle class improves the standard of living across the globe, it comes at a cost, as Eileen Crist, a coauthor of the recent paper and professor at Virginia Tech’s Department of Science and Technology in Society, explained to CBC News:

“The rapid rise of the global middle class, which is now more than three billion people in the world and it’s expected, by 2050 or so, to rise to five billion people… The chief concern isn’t really the human numbers as such. It’s the impact we have.”

That impact amounts to what those in the middle class are able to buy: appliances, cars, travel, more meat. This increased consumption poses a significant threat to biodiversity.

“We are in the throes of a mass extinction event that is anthropogenic,” Crist said. “This is not something we can fix. If we lose 50 to 75 per cent of the species on the planet in this century — which is what scientists are telling us what will occur if we continue to operate as business-as-usual — if this happens, this can not be fixed.”

WHAT CAN WE DO?

1.  We must bring environmentally damaging activities under control to restore and protect the integrity of the earth’s systems we depend on. We must, for example, move away from fossil fuels to more benign, inexhaustible energy sources to cut greenhouse gas emissions and the pollution of our air and water. Priority must be given to the development of energy sources matched to third-world needs—small scale and relatively easy to implement. We must halt deforestation, injury to and loss of agricultural land, and the loss of terrestrial and marine plant and animal species.

2.  We must manage resources crucial to human welfare more effectively. We must give high priority to efficient use of energy, water, and other materials, including expansion of conservation and recycling. This is a preprint version of the article which may be slightly different than the published version.

3.  We must stabilize population. This will be possible only if all nations recognize that it requires improved social and economic conditions, and the adoption of effective, voluntary family planning.

4.  We must reduce and eventually eliminate poverty. “I believe we absolutely should have such bold goals for our country,” says director of The Earth Institute Jeffrey Sachs.“By 2030 let’s cut the poverty at least by half.”


5.  We must ensure sexual equality, and guarantee women control over their own reproductive decisions. “As women and girls get better educated, they have fewer kids, and the kids they do have have more resources so they’re better taken care of and they are more successful,” says Bill Nye. “So what we want to do, in my world over here in science education, is get women and girls around the world as educated as best we can as fast as we can so that there will be more resources per person in the coming years.” 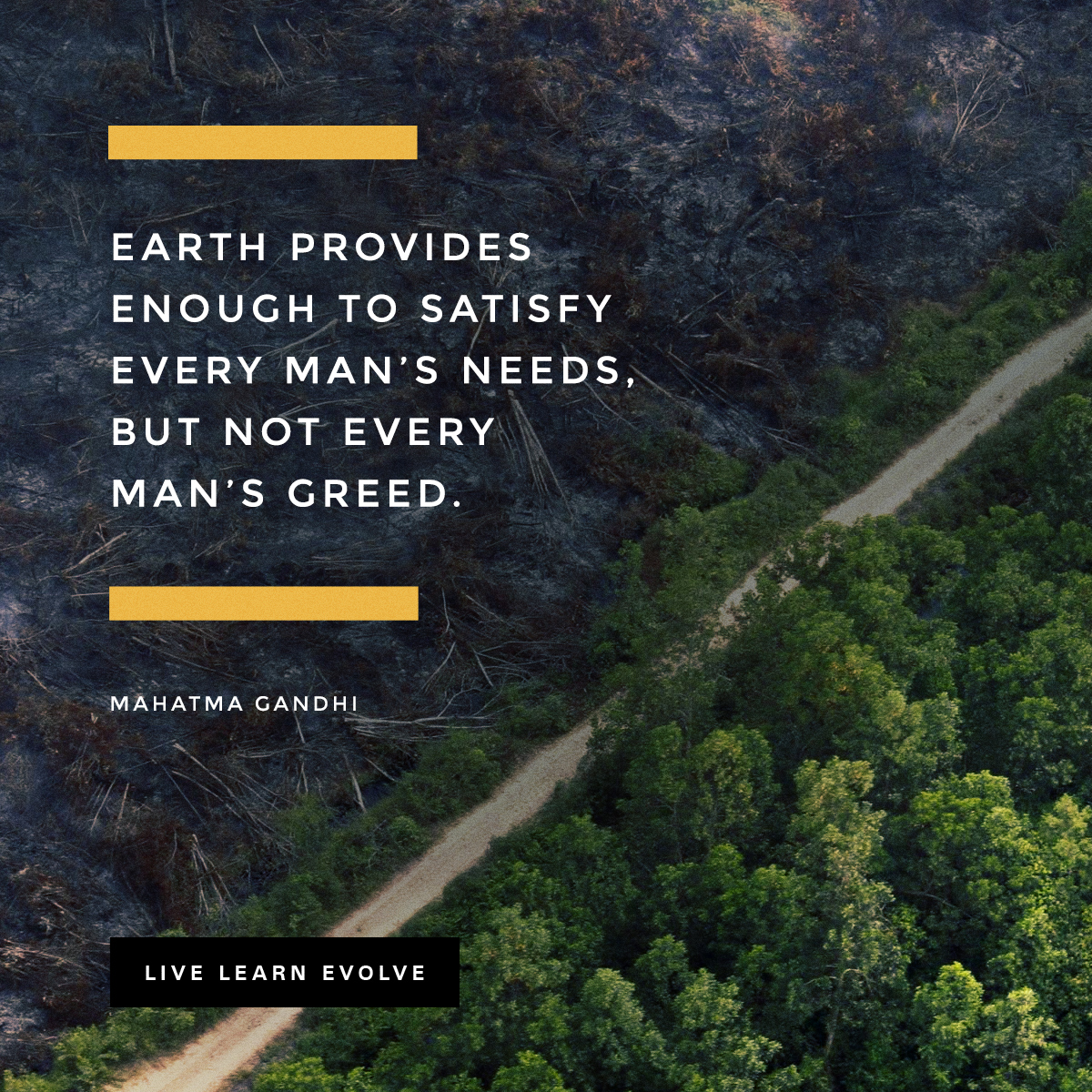