OUT OF MIND » TRUTH IN CONSPIRACY THEORIES? » PREDICTIVE PROGRAMMING » Disclosures in the TV Show ‘The 4400’

I have been sitting on the notes I took from this amazing show for months now and I am finally feeling the sense to put it all together and share it here. It takes a lot of work to put these analyses together so I wasn’t looking forward to doing it but apparently now is the time.
This show, in addition to many others, is very important as it lays out what is currently happening on this planet. They delve into ascension, classified super-soldier programs, the Illuminati, evil corporations, the second coming of Jesus and many other things. As I have mentioned before I am not religious but as an impartial researcher I believe it is my job to keep an open mind about everything and include all  information when researching something.
I would also like to note that the story line corroborates the information we were given by Corey Goode in regards to the Anshar, who are beings from the future that traveled back in time millions of years to correct an ‘issue’ that they found here during our time. This is the main plot of the show.

People from our future take people from various points in time and augment them with certain ascended abilities, mostly just one per person. This is to help stop extremely evil beings from taking over the world and to help turn Earth into a paradise. Basically this is a battle between Good and Evil.
https://youtu.be/E0r-fo102jE

To me this show screamed ‘this is about the battle for the planet and the 144,000 Starseeds that came to this planet from different places and planets to help liberate it and turn it into a paradise and rid the world of evil forever‘. The show is titled ‘The 4400’ and the people that come back (the 4400) have abilities and are tasked with helping to liberate the planet from darkness and evil.

One of the significant things I noticed about the show right away was that these people who came back with ascended abilities arrived to Earth in a Blue Sphere from space: 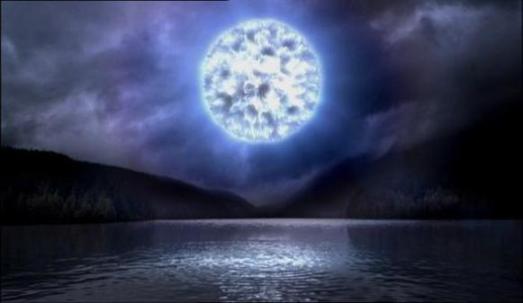 These people were tested before coming to Earth. Two of the main characters even spent time together in a different dimension/plane of existence to strengthen their relationship before coming here.

Washington D.C. recruited a man with telepathic capabilities to do work for the NSA. It was very malevolent work. (This is something we have heard before, that the gov’t/Cabal want to find and corrupt the Starseeds and use their abilities for evil.)

At one point there was a man living in a mental institution that apparently was a dormant genius who needed to be activated for a certain mission. The others in the institution built a massive tower to beam a signal out which would in turn result in the man being hit with some kind of return beam and regain his intelligence. One of the female patients there had the ability to influence people around her so she used this ability to guide the other patients into creating this tower.

The gov’t/Cabal knew who these people were and intentionally poisoned them with promicine (this is the name of a new neurochemical the 4400 had in their brains upon their return) inhibitor so that their abilities would stop working. They were desperately afraid of losing control of the population:
https://youtu.be/ORG-Dn7c5pg

Certain corporations used promicine to create a department within the gov’t with 4400 abilities. The military even came forward and disclosed their own developing super-soldier program:
https://youtu.be/B2DPnl9o8AU

As I mentioned in my own personal interpretation of this show there was a very obvious battle between good and evil being waged on the planet that became very intense at many points during the show. The leader of this 4400 movement Jordan Collier (he is obviously meant to represent Jesus) went on various TV programs and announced that this was a war between good and evil going on:
https://youtu.be/bn4q7BDpbVM

One of the 4400 returned pregnant with a baby girl. After giving birth the woman soon realized the baby had many abilities which she used against people who had negative intentions towards her. This baby grew into an adult woman within a very short amount of time (less than a week or so I believe). She battled between using her infinite abilities for good and evil and seemed quite set on destroying the 4400s. She used her powers for good in the end though.

During the show one of the main characters’ abilities was a female guide who would give him advice based on what was the highest good for him, even though he didn’t agree sometimes. She led him to a house where he was shown a book written by an old society called the White Light Group from 1918 who predicted the Messiah’s return. This was conditioned by a list of people included in the book who would have to take a promicine shot in order for God/Source (whichever word you prefer to use) to return to Earth.

Another significant part of this show was its depiction of a secret society that controlled everything. This included world leaders in the Vatican and an individual named Drew Imroth, who is the CEO of the world’s largest software company in the show, ‘Ubient’. To me this is an obvious reference to Bill Gates and The Rothschild clan. This information was produced by a 4400 man whose ability was being ‘given’ information to put into poorly made movies:
https://youtu.be/7_gqnTiqJpk
In the next video he shares how this small group of elite members of society have been guiding humanity with their own desires and agendas in mind. He has called these people ‘The Marked’. Later on in the show it turns out that the Director of National Intelligence is ‘Marked’. This is an obvious reference to the Christian religion in regards to those who have the ‘mark of the beast’, meaning they are of an evil orientation:
https://youtu.be/QLUxGK9Ffkk
Disturbingly, one of the main characters investigates these claims and after including this information in his report he is apprehended and institutionalized for 72 hours.
These ‘elite’ individuals believe that half the planet needs to be culled in order to create a more evolved species.
As it turns out, evil beings from the future created a powerful being ‘Isabelle’ to destroy the 4400 and preserve their timeline.

In one of the scenes the gifted movie maker goes onto say that the ‘Marked’ have tiny machines inside of them that they intentionally injected themselves with via their spine. They would do this to people whom they wanted to join them. The evil personality from the future manifests itself after the nanites have replicated themselves enough in the body in which they were injected into. This corroborates intel from Cobra where he mentioned that many top Cabal members have incorporated nanotechnology into their bodies.
https://youtu.be/um22KGoWabg

The group of 4400s go on to use their abilities to fight this war for the planet and one of the aspects they draw attention to is the financial system. Someone puts a virus into it which causes many interruptions in the United States.

The ‘Marked’ CEO of the largest software company in the world Drew Imroth uses spyware in their software.

The evil beings who created Isabelle found themselves in chaos as she betrays them and helps Jordan escape so he can continue on with the advancement of the 4400.
Both good and negative factions of this movement were developing their own promicine shot which is an injection that would give abilities to certain people who took it. But there was a 50/50 chance of people experiencing death after receiving it.
I also believe that the shot itself could represent the danger of coming forward and being a part of this war between good and evil. Some may want to take a more active role and some may not want to participate but those who decide to step up and fight for good will face great danger but also obtain rewards beyond their wildest dreams. I can personally vouch for this…
One of the characters injected himself and developed the ability to release promicine in an air-borne manner which caused a great deal of death and at the same time propelled the evolution of humanity into a new age. People in the government experienced ascended abilities – every aspect of society was changed. This was the event that finalized this great change that was supposed to happen.
Now some people might think of this as a terrible event. However, I have to think about how the majority of people on this planet will not be able to handle the increasing level of vibration here and how many people have already died/transitioned as they are not compatible with this planet which is going on to be 4th/5th density. It is important to remember that everyone chooses how they will leave this planet. Sometimes the death is violent, sometimes it is peaceful. It depends on what the person chooses in advance.
It is also possible that when the time comes most people will be transported to other worlds to finish out their 3rd Density experience in a more benevolent environment.

I hope you enjoyed this analysis, I am happy that it turned out well (I hope) and I hope it gives people hope that there are people working to make this planet a beautiful place again. No doubt without the help of you Starseeds reading this!
If you enjoy these articles and videos and feel guided to support me I will share my paypal link below:
https://www.paypal.me/TruthEarth
Thanks to: https://truthearth.org

OUT OF MIND » TRUTH IN CONSPIRACY THEORIES? » PREDICTIVE PROGRAMMING » Disclosures in the TV Show ‘The 4400’