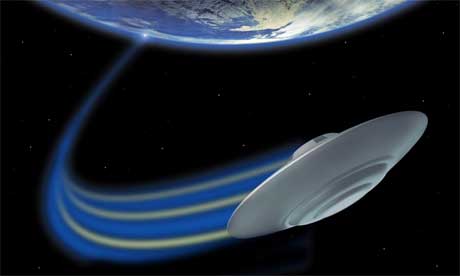 
Dover, New Hampshire - An object in the sky over Dover, New Hampshire left a witness bewildered this past November 18th. The incident happened when the witness was driving north on route 16. He first spotted the object around 9:52 AM. He says his viewing angle was 40 degrees. Here is how the witness described the sighting. "The object appeared as a black line with slightly curved edges. Not to read into it, but my first thought was this is the black line that could separate the top and bottom of a flying disc. Disc was not visible though. Did not move as normal aircraft, but moved very slowly, sometimes stationary. I also thought that perhaps it was one of those long balloons that clowns twist into animal shapes, but the line did not undulate with the wind, and also did not move as fast as a balloon or in one direction. Also it was visible behind clouds that appeared to be very high in the sky, which made me think it was quite large. There were two times where the line slowly transitioned to a red/orange color and then back to black as if the angle it was rotating caught the sun's reflection. I was in the car so I could not hear a sound. It should have been close enough to the Pease Airport radar to be picked up." Another interesting experience from Dover, New Hampshire.


Dover, New Hampshire - We have a second video from Dover, New Hampshire showing the "pole" looking unidentified flying object that was reported by another witness yesterday. The witness from today's video was driving down the highway attempting to capture footage of a collision. He had not intended to capture video of the pole object, that was simply a bonus. This is how the event was described by the witness. "At 8:45 am heading south bound on NH Rt 16 approaching tolls in Dover. Heavy traffic south bound caused by rubber necking to see north bound crash. I was taking a video of the traffic crash when I noticed something in the sky. It looked like a telephone pole and was black. I was probably moving at 10 miles per hour and when it went past me. It was moving right along, maybe 30 miles per hour. I lost sight of it in the bright sun." The object is a lot more clear in this clip than it was in the previous clip from Dover. There is something strange going on here, more than one person witnessed the same event from different angles.