OUT OF MIND » THE INSANITY OF REALITY » CERN LHC » WHAT DARKNESS LURKS INSIDE THE LARGE HADRON COLLIDER AT CERN IN GENEVA SWITZERLAND?

WHAT DARKNESS LURKS INSIDE THE LARGE HADRON COLLIDER AT CERN IN GENEVA SWITZERLAND?

WHAT DARKNESS LURKS INSIDE THE LARGE HADRON COLLIDER AT CERN IN GENEVA SWITZERLAND? Thu Nov 30, 2017 5:49 pm 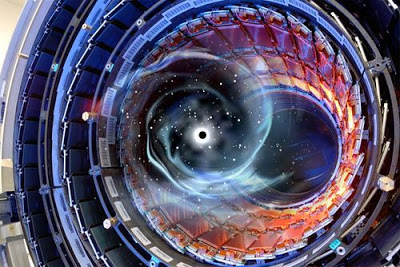 
(NEW2017) CERN Scientist in Geneva Switzerland and the mighty LHC (Large Hadron Collider) are scheduled to open a portal to another dimension as soon as 2018 scientist say! Although after a magnet shut down that was experienced this past March of this year, this timeline may be delayed slightly, but scientist at Cern say "The Experiment will happen!". Whether they are successful or not is anyone’s guess at this point, there are questions whether the machine is powerful enough to do this type of portal opening yet. Most of this information whether fact or fiction, has been kept from the public eye for obvious reasons, but whether Jacob's Ladder really existed, CERN are pretty sure that other dimensions do and have made it their goal to ensure that they open the portals up to them... WTF? CERN want to use the LHC to find out the fundamentals of our universe and how it was created, they want to recreate the Big Bang and find out what matter existed at the creation of our universe, but this is not the only major role for the machine, with the LHC CERN are EXPECTING to find other dimensions and open portals to these dimensions, if you have the image of Stargate in your head right now, you are spot on. The Large Hadron Collider or LHC is the world's most powerful particle accelerator, the machine is made up of superconducting magnets which line a 27KM loop, homed 300 ft below the ground at the CERN Control Centre in Geneva, Switzerland. The machine is the result of thousands of scientists and engineers planning and building over the last few decades. To explain simply what the machine does, it sends sub atomic particles at the speed of light hurtling around the loop in opposite directions and then smashes them into each other. The LHC was first fired up in September 2008 and in 2012 the machine was responsible for the discovery of the Higgs Boson, the God Particle. Higgs Boson is a particle that is said to be the particle that makes all matter and led to the creation of our universe. There are some very interesting theories connected to CERN, and we will warn you that the following theories may offend you, we are simply sharing this information with you for you to make up your own mind. One theory is that there is a connection between CERN and Saturn, you may of heard of Jacob's Ladder which is described in the Book of Genesis. This ladder is said to be a ladder between heaven and Earth that allowed angels to come down to Earth. One of CERN's goals is to recreate Jacob's Ladder and reopen a portal that is said to of existed between Earth, Mars, Venus and Saturn when the planets were in alignment many years ago. There are even rumors that back in 2012 CERN successfully opened a portal and witnessed giants known as Nephilim, this is said to be one of the reasons that they shutdown the LHC in order to make it more powerful and fix the magnets after they broke opening the portal the first time. Could this actually be happening? Have the trekkies lost their minds? Its one thing to theorize in another dimension existing, and entirely another to spend billions to find one with plans to open it when they do. What do you think about this? Should Cern play God with our planet at humanities expense? It has been theorized by several well known scientist. "Its like playing with matches as a child, were not sure something will get burned.. But it could happen" With that said, It seems in this case, we could be what gets burned. Lets hope not. LIKE SHARE and COMMENT We always want to know what YOU think! SUBSCRIBE TODAY! The WTF Files

OUT OF MIND » THE INSANITY OF REALITY » CERN LHC » WHAT DARKNESS LURKS INSIDE THE LARGE HADRON COLLIDER AT CERN IN GENEVA SWITZERLAND?