From Justin Brill, Editor, Stansberry Digest:
Despite this week’s big ‘controversy,’ regular Digest readers know Porter and Steve Sjuggerud are in agreement about two critical things…
While they disagree on when the current “Melt Up” will end, they both believe it will be followed by a “Melt Down” of historic proportions.
They also agree that seeing the U.S. Treasury yield curve turn negative – or “invert” – will be a strong signal that the boom is ending. As Steve explained in yesterday’s Digest…

Porter and I published the exact same chart on Friday. We both said it’s a major “get out” warning for us… 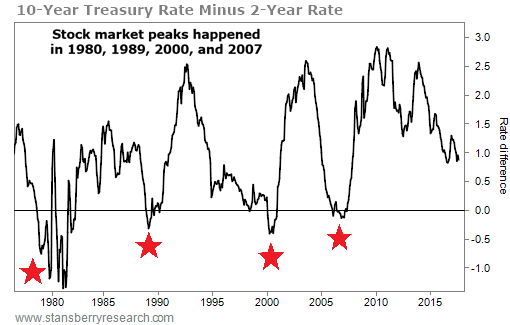 The chart shows us that when we get an inverted yield curve, stocks peak and a recession is around the corner…
Porter says it could turn negative by early next year. I think that day happens in 2019 or even 2020. Only time will tell… But whenever it does happen, don’t take it lightly. Bear markets happen a lot faster than bull markets. And great bear markets tend to follow great bull markets.
The reason this signal is powerful is simple and intuitive…

Suppose a friend asks to borrow some money. In general, the risk that you won’t be paid back in full increases the further out in time you agree to lend. In other words, all things equal, your risk is much lower when lending to him for a week than for 20 years.
The same idea is true in the bond and loan markets. As a result, the longer the maturity of a bond or loan, the higher the rate of interest the lender typically charges to compensate for these higher risks.


Bitcoin just keeps climbing and is here to stay, but how can average investors jump in? Special Report Here

by   Promethean Marketing Inc
This means that under normal circumstances, an inverted yield curve – where short-term bonds yield more than long-term bonds – should never occur. It’s a sign that something isn’t “right” in the economy.

Usually, it occurs when the Federal Reserve (which sets short-term rates) and the bond market (which controls long-term rates) disagree about the underlying strength of the economy. And history shows the bond market is usually right.
As Porter noted on Friday, an inverted yield curve is particularly bad for financial stocks…

Remember, banks earn a profit by borrowing short-term and lending long-term. When yields are inverted, banks are less incentivized to lend. (After all, why would you willingly lend money at a loss?) Bank earnings will fall.

But the consequences extend beyond financials alone.
As part of the “fractional reserve” paper money system, banks are a critical “cog” in the modern, debt-fueled economy.
We’re already seeing signs of tightening financial conditions. If banks stop lending, credit growth will grind to a halt. And once credit growth stalls, it’s only a matter of time before this gigantic financial bubble bursts.
What should you be holding when it does?

Regular readers know we believe a healthy allocation to gold and silver – along with some cash and a perhaps few short sales – is among the best “hedges” you can own today.
But the broad commodities sector could do very well, too. As we noted earlier this summer in the June 7 Digest… 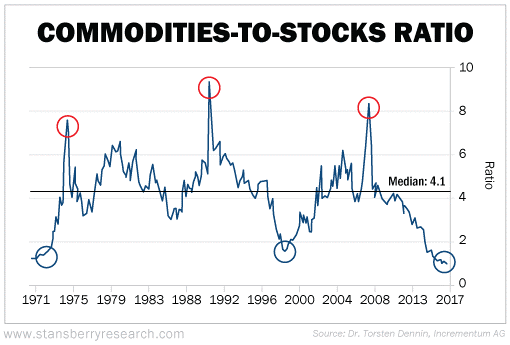 The chart shows the commodities-to-stocks ratio over the past 47 years. This ratio compares commodities – as tracked by the S&P GSCI Commodity Index – with the benchmark S&P 500 Index. The red circles show times when commodities have become extremely expensive relative to stocks. And the blue circles show times when commodities have been extremely cheap compared with stocks.
As you can see, this ratio has now fallen to an extreme rarely seen over the past five decades… In fact, it is now even lower than either of the previous two bottoms…
Today’s historic lows suggest “real” assets could once again be set to beat financial assets over the next several years.
This reversal may already be underway…
Despite the continued rise in stocks, this ratio bottomed just days after we published that Digest. And it has been moving slowly higher ever since.
Take another look at the chart above. You’ll notice that during the last Melt Up in the late 1990s, commodities began to outperform before the stock market peaked in early 2000.
Of course, we can’t say if this is THE bottom. Only time will tell if commodities are entering a bull market.
But we do know for certain that stocks and financial assets are more expensive than ever before. We also know most commodities have been left for dead following a brutal multiyear bear market. And history suggests it’s simply a matter of time before they dramatically outperform stocks again.
If you don’t own any commodities, it could be a great time to start buying.
Regards,
Justin Brill