Early evening of August 29, 2017 between 6:30 and 7 pm approximately, I was driving home from Williamstown, Ontario, Canada. I had to take country roads to get home. Less than 5 minutes in my drive I noticed a strange colored bit of cloud that had some rainbow colors but the other clouds were not affected. 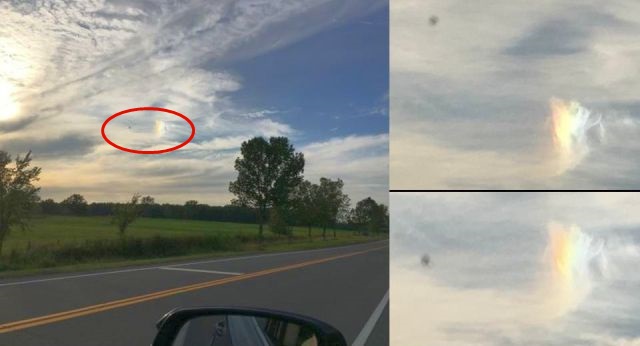 It was still daylight and the sun was showing up, a blue skies and sections with many clouds. There was no rain at all on that day. No signs of rain in my area, no thunder or lightning. Then, within a few minutes that weird cloud completely detached itself from the surrounding clouds and dropped below them.

Once fully detached the colors became very sharp. The colored piece of cloud was so weird and beautiful that I ended up stopping by the side of the road to take several pictures with my iPhone.

At some point that "cloud" was completely detached and was not moving as like the other clouds. It stood still, hanging low in the sky.

After, I had errands to run and forgot about this event until my memory card was almost full... That is 3 months later. So, on November 27th I went into my pictures to clear some in order to create more space on my phone's memory card. Seeing how cool that cloud was on the pictures I decided to send them to a friend of mine to have a look at that cool event.

Looking at the photos on my phone I only thought the round thing was a bird flying by. I am into UFOs and did not want my enthusiasm to make me see only what I wanted to see. So I rationalized it at the time. 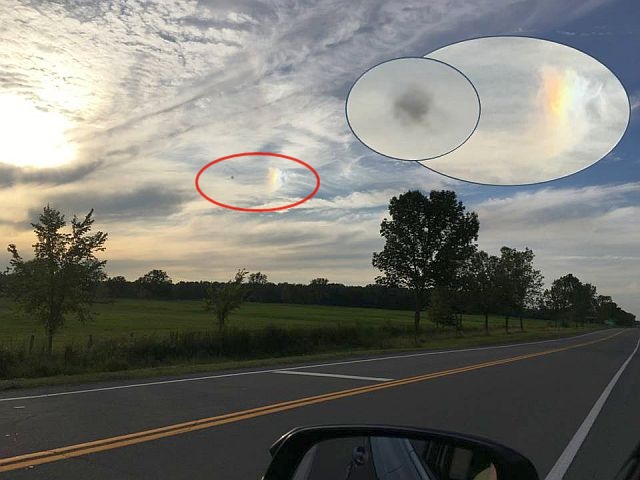 But my opinion changed when my friend was looking at them on her computer and she mentioned that there were some things in the sky that were unusual.

So, looking at my pictures on a computer screen we both think there is at least one UFO on a few of the pictures with that weird colored cloud. I never noticed anything but the bizarre cloud while I was taking the pictures. I wish I had, but I was very focused on it. 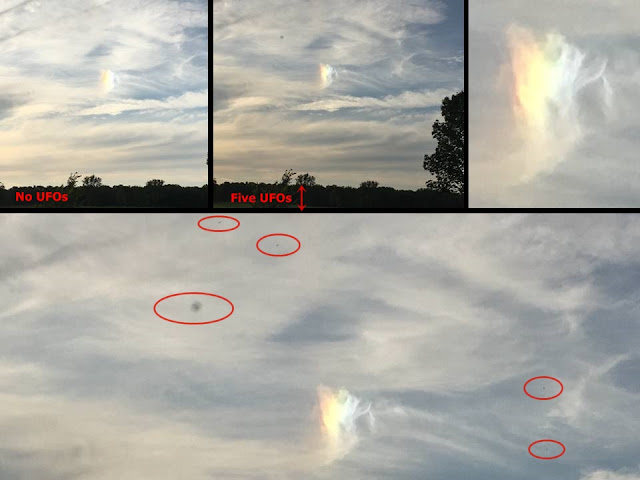 We are pretty sure that there is at least one UFO on the pictures. As it is round, a perfect circle within another circle. This one we are pretty certain is NOT a bird flying by. Also, it appears that there were two others that were in formation farther away and maybe 2 more.

This weird cloud was a real oddity in itself as it was not moving like the other clouds and I may never know what all these objects were but I can say that I found this very unusual and very cool. I have submitted the pictures to the Mutual UFO Network under file 88479 for further investigation.