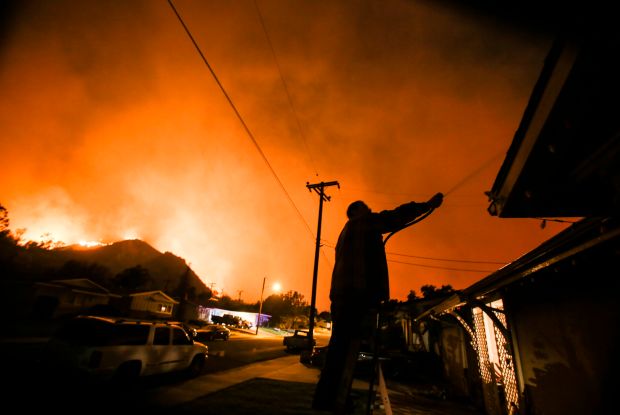 The explosive Thomas fire driven by ferocious Santa Ana winds has now devastated nearly 60,000 acres, 70 square miles with zero percent containment by Tuesday evening.
Multiple homes in the area of Scenic Way Drive in Ventura could be seen burning from the air. In downtown Ventura, the Hawaiian Village apartment complex was engulfed in flames according to abc7.
More than 7,000 homes in Ventura County were under mandatory evacuation as the blaze closed in on downtown Ventura, where multiple structures were reportedly burning.
Fire officials said 27,000 people were evacuated from their residences.
California Governor Jerry Brown declared a state of emergency, freeing state funds and resources to assist the more than 1,000 firefighters battling to save homes from the conflagration.
“This fire is very dangerous and spreading rapidly, but we’ll continue to attack it with all we’ve got,” Brown said in a statement.
“It’s critical residents stay ready and evacuate immediately if told to do so.”
There were no immediate reports of fatalities from the blaze but KABC-TV reported that one person was killed in a car crash while fleeing the area.
“Due to the intensity of the fire, crews are having trouble making access and there are multiple reports of structures on fire,” officials said on Ventura County’s emergency management website.
More than 250,000 homes were without power, utilities said.
All schools in the Ventura Unified School District were closed.
The Thomas Fire was the largest of several large blazes that broke out across Southern California following the onset of the Santa Ana winds.
According to Reuters, in the San Fernando Valley north of Los Angeles, the so-called Creek Fire had blackened more than 11,000 acres and forced the evacuation of 2,500 homes and a convalescent centre north of Interstate 210. 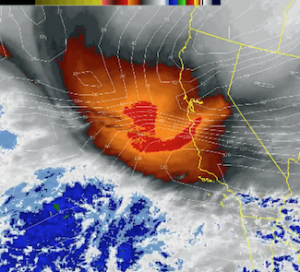 [/url]
Dane Wigington
GeoengineeringWatch.org
Yet another round of extreme firestorm catastrophes are hitting California. Like the recent Santa Rosa fire disaster, the current wildfires are verifiably connected to conditions created by the ongoing global climate engineering assault. The geoengineering cabal is becoming more desperate by the day as the biosphere and climate unraveling accelerates exponentially. The 6 minute video below reveals aspects of the climate engineering assault and its connection to the California firestorms.

Though many have been falsely led to believe that last winters rain in California erased and eliminated the drought, this could not be further from the truth. Last summer was the hottest and driest on record in countless locations of the US west.The following quote is from the Los Angeles fire department chief:

Geoengineering operations are not only completely cutting off precipitation from the US West and destroying the ozone layer globally, the desiccant particulates from the fallout create an incendiary dust that coats foliage and structures.
Below are two shocking photos from the current Southern California fires. 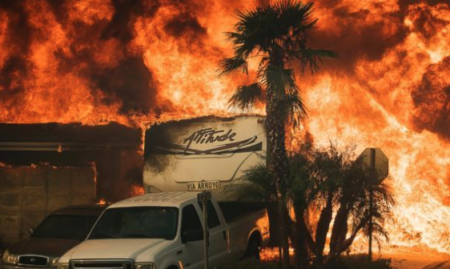 Flames consume a home on Via Arroyo as a wildfire rages in Ventura, Ca, Dec. 5, 2017. AP Photo/Noah Berger 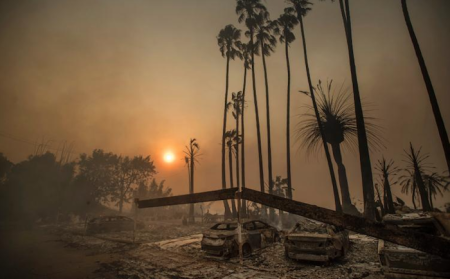 Smoke rises behind a leveled apartment complex as a wildfire burns in Ventura, Ca, Dec. 5, 2017. AP Photo/Noah Berger
While California continues to go up in flames, regions of the Canadian Arctic and Greenland have recently been basking in record warm temperatures nearly 60 degrees above normal.  At the same time that record heat is occurring in the polar regions and elsewhere, snow is forecasted (scheduled) to fall as far south as Chihuahua, Mexico (2017 also saw record low ice at BOTH poles). The climate engineers will continue to use patented chemical ice nucleation processes to fuel ever more extreme weather whiplash scenarios. The climate engineers are manufacturing the illusion of winter in some regions while overall global temperatures continue to soar toward a runaway scenario. 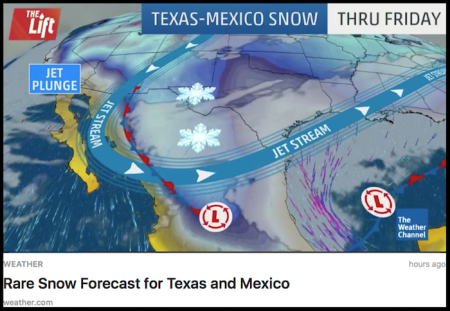 The extremely anomalous jet stream configuration shown in The Weather Channel's "forecast" map above (scheduled weather) are meteorologically unprecedented. Climate engineering can create short term surface cool-downs at the cost of an even worse overall planetary warming.
The departure from normal high temperature map below reveals the engineered weather whiplash scenarios being created by the geoengineers. The extremely anomalous sea surface temperature division line, wrapping around the Gulf of Mexico and up the East Coast of the US, is shocking. The anomalous hot and cold zones throughout the North American continent are yet another harbinger of the climate intervention operations and the weather whiplash scenarios they are creating. 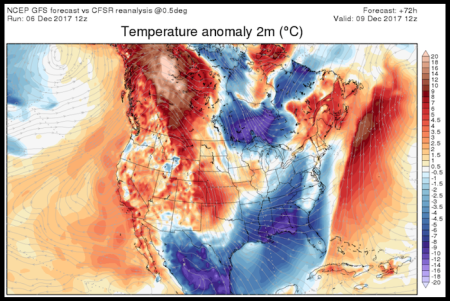 It is important to remember and consider that all the temperatures reflected in the map above (and temperatures being reported by weather news sources) are surface readings. Commercial and private pilots (that are communicating with GeoengineeringWatch.org) are reporting ONLY far above normal temperature readings at altitude. The climate engineered chemical cool-down zones occupy only a shallow layer of air at the Earth's surface.
The gravity and immediacy of the changes currently unfolding around us cannot be overstated. What we face on the near term horizon are nothing less than existential threat. How can we make a difference for the better? How can we individually affect the equation? By doing our individual part to fully expose climate engineering. If we can expose it, we can stop it. How can we effectively and efficiently wake others up to the climate engineering assault? By sharing credible data from a credible source. Reaching a critical mass of awareness is the only way forward, make your voice heard.
DW
May be freely reprinted, so long as the text is unaltered, all hyperlinks are left intact, and credit for the article is prominently given to GeoengineeringWatch.org and the article’s author with a hyperlink back to the original story.